Before we talk cocktails, Christopher Longoria asks if he could put on some music. He makes a few quick swipes on the iPad resting in front of him, and suddenly Amy Winehouse’s soulful voice fills the dining room. Longoria is the bar manager at 1760, the casual spin-off of nearby Acquerello. For him, music is both a passion and a source of inspiration, but it could also serve as a motif for his expressive style.

Longoria maintains an upbeat rhythm at 1760’s handsome bar, directing his team like a jazz quartet and addressing them by their honorific titles. “My approach to the bar is to be graceful,” he tells me. “Graceful in how I speak, how I move, and how I make cocktails. I don’t like chaos.”

His drinks reflect his demeanor: They’re soulful and harmonious. He references a grandmother’s cooking — alive with gusto, personality and character — when describing his creation of the restaurant’s cocktail list. He also wants drinks to pair well with chef Adam Tortosa’s food, so he focuses on the flavor of ingredients. “I like the taste of things. I like the taste of lavender, the taste of cantaloupe for example. I like things to taste delicious,” he explains. Nearly all drinks are named after their primary taste, reflecting an emphasis on flavor as opposed to their base spirit.

The Mango and Spice cocktail (mango, cayenne, black peppercorn, long pepper, lime, and rum) originated while Longoria was on a beach in Manzanilla, Mexico. A cart vendor approached him with mango sprinkled with chili powder, and his first thought was: This needs rum. True to its name, the mango in the cocktail is bright but tempered by the spice from the cayenne and vanilla from the rum.

Before 1760, Longoria was at Michelin-starred Aziza pairing drinks with chef Mourad’s elevated Moroccan dishes. I asked him what he learned during that time, and he quickly answers, “I learned how to muddle,” referring to Aziza’s 30-drink cocktail list that required each drink to be muddled individually.

I thought he’d never want to see another muddler, but he grabs one for his Kumquat-Coconut cocktail (Disaronno, cinnamon, and añejo tequila), a delectable drink that balances the creaminess of coconut puree with the acidity of muddled kumquats. Oak from the aged tequila blends well with the almond from the Disaronno while a generous shaving of fresh cinnamon gives it a great nose. It’s a deeply satisfying drink.

Longoria makes a point of eschewing trends. For the primary spirit in his Black Currant Bramble (see recipe below), he chose vodka, anathema to the speakeasy set. The black currant of the cassis is highlighted against a perfectly balanced backdrop of citrus and sugar. The fresh black pepper adds bite and character to the vodka.

The restaurant’s namesake cocktail, The 1760 (mint, cumin, mezcal, tonic, and gin), is an addicting drink that’s at once familiar but completely haunting given the curious mix of ingredients. The mint, cumin and mezcal blend incredibly well together while the gin tames the smoky intensity of the mezcal. A topping of Fever Tree tonic water lends a soothing, effervescent fizz.

When’s he’s not at the bar, Longoria says he is either hiding out or working out, noting that a bartenders’ line of work is notoriously hard on the body and one’s health. But on the right afternoon, you can catch him at the St. Regis lobby bar enjoying a glass of champagne. He also likes to swing by Cantina when owner Duggan McDonnell is around.

Longoria says he rarely drinks at home, but concedes that bourbon is his best back-stabbing friend, possibly showing his southeast Texas roots. He also finds room for Fortaleza tequila and Voyager gin. His latest discovery is Hakushu Japanese whiskey, which drinks like a scotch and is best garnished with a single ice cube.

Combine ingredients in a cocktail shaker, shake, single-strain, and pour into tall glass filled with ice. Garnish with marigold petals and one grind of fresh black pepper. 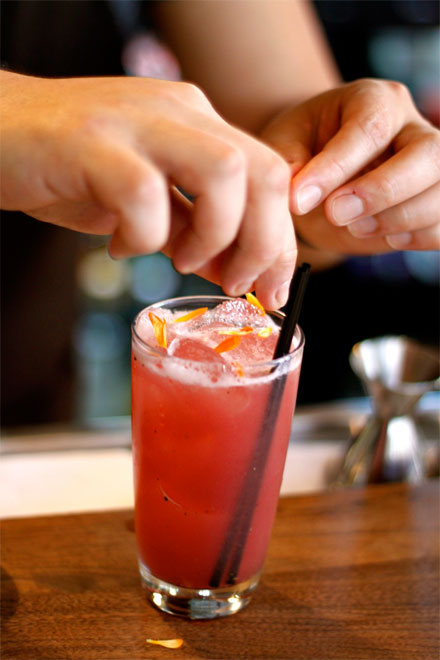 The Black Currant Bramble (photo: garrick ramirez)
Tweet
Send to a Friend Print
Garrick Ramirez can be reached on Twitter at @WeekendDelSol or at [email protected].