Chestnut Street is no stranger to Fireball, the trendy cinnamon whiskey that’s burning through bars. But you won’t find the label’s flame-headed demon at Delarosa. Bartender Jake Roberts says they eschew mass-produced products for lesser-known, high-quality spirits. “It’s an opportunity to introduce guests to something new,” he explains. “How’s that going?” I ask. “Everyone takes it pretty well except for the Jack Daniels’ drinkers,” he says with a smile.

Roberts is an affable, good-looking guy with an infectious grin. He shares an easy camaraderie with the fraternal staff behind the bar at Delarosa. You get the sense that he’d be the first to step up if anyone ever challenged a friend. Originally from Maine, he came here on vacation three and a half years ago and never returned. “The scene out here was exciting. I got off the plane and it was 80 degrees,” he says. I make sure he’s referring to San Francisco, Calif., where our renowned marine layer has its own Twitter account.

“Bartending back home was something you did while you waited for something else to materialize. Out here, you can make a living out of it,” he says. “But I don’t consider myself a mixologist. I’m a bartender who’s worked every type of bar: sports, dive, cocktail, you name it.”

It makes sense then that he’d land at Delarosa. From the same group behind Beretta and Super Duper, it’s a mix between upscale cocktail bar and casual neighborhood hangout. Inside, a bar spans the western wall and serves as an altar for a room filled with tidy rows of long wooden tables and suspended incandescent bulbs. Big sunny windows open onto Chestnut while vintage Jamaican reggae grooves overhead. It feels like a modern pub or tapas bar where a young crowd packs in for drinks, pizzas, and small plates until 1 a.m.

I ask Roberts what the typical San Franciscan orders and feign surprise when he states Old-fashioneds, Manhattans, and Negronis. “It’s incredible how many people want those same three drinks,” he says with genuine wonder. Delarosa’s rotating cocktail menu sneaks in a few bright, citrusy drinks among the requisite brown, bitter, and stirred ones.

A mainstay is the Salty Dog. The saline sibling of the Greyhound is a signature drink that’s been reconfigured with vodka, elderflower liqueur, and grapefruit. They sell twice as many of the drink than any other on the menu. It’s also responsible for the 60 grapefruits they juice a day.

Some of that juice shows up in the new Farmer’s Choice (Flor de Caña rum, grapefruit, lemon, martinique syrup, bitters, chili, red bell pepper). It’s a riff on a cocktail of the same name from the popular PDT Cocktail Book, which collects recipes from the eponymous New York City speakeasy. It’s a refreshing drink with a touch of warmth and earthiness; the perfect drink for a San Francisco summer.

Another new drink to the menu is the Quiet Man (recipe below). Named after the Irish band of a former server, it blends Irish whiskey with French apple brandy and basil. The crisp, slightly herbaceous drink has an addicting zip from spice and citrus.

Roberts claims Polk Street as his hood. He’s worked bars at both ends of the thoroughfare and now manages Harper & Rye (recently opened in the old Red Devil Lounge space), which sits in the middle, just across from his apartment.

He likes going to Shanghai Kelly’s for a High Life and fernet in a classic San Francisco bar. He also likes Hi-Lo Club, which he says makes a great, low-key date spot if you ever want to disappear into a dark candlelit booth. Closer to Delarosa, he and the staff head to the Marina Lounge. He says the bartenders from the Marina Lounge, California Wine Merchant, and Delarosa all frequent each other’s bars. A co-worker chimes in to refer to it as The Triangle of Death.

When I ask Roberts what he hides away in the home bar, he says he doesn’t drink at home. But if you crack open his fridge, he admits you’ll probably find some Victory Pilsner. He then introduces me to R. Jelínek, a Czech fernet that’s sweeter and more redolent of cloves than the ubiquitous bartender fave, Fernet-Branca. He also likes Benders Rye, which is made on Treasure Island and Spiritworks Gin from Sebastopol. He says the latter has nice balance between gin’s usual pine and fruity-floral qualities. It’s smooth but not dainty.

Shake, strain, and serve in a snifter glass with two ice cubes and a basil leaf garnish. 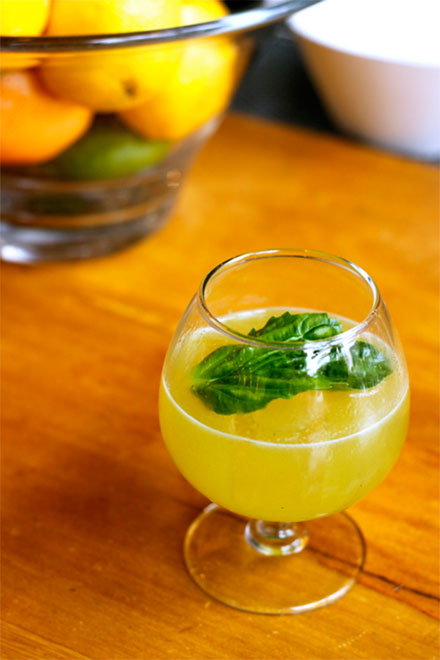 Quiet Man cocktail (photo: garrick ramirez)
Tweet
Send to a Friend Print
Garrick Ramirez can be reached on Twitter at @WeekendDelSol or at [email protected].