Is the mayoral candidate the company she keeps?

Can London Breed control the city if she can´t control her trolls? Photo: Jami430
by Susan Dyer Reynolds

I’ve lived in the Haight-Ashbury district for three decades, and watched as it went from grief-stricken hippies pouring into the streets upon the death of Grateful Dead guitarist Jerry Garcia to heroin being sold off the hoods of cars to felonious transients beating people up for their iPhones. I was so frustrated by District 5 Supervisor Ross Mirkarimi’s lack of action that, in 2010, I penned an editorial for Northside San Francisco magazine titled, “The thugs who run Haight Street.” In 2012, much to my dismay, Mirkarimi was elected sheriff, and Mayor Ed Lee appointed Christina Olague to fill the supervisor position; however, Olague’s tenure was short-lived as a bright, tenacious African-American woman named London Breed burst onto the scene. I was impressed with Breed, and I voted for her. While the Haight didn’t improve much during her first term, I gave her the benefit of the doubt and voted for her again. Since then, I’ve come to regret my decision.

Not only is the Haight still overrun by violent transients, many are now addicted to methamphetamine. On Feb. 17 in the Panhandle, one person was killed and another critically injured in a shooting and carjacking. Three days later I was walking on Haight Street near Stanyan Street when I observed an obviously high man in his 20s beating his pit bull. I screamed at him to stop and he threatened to kill me. Seeing zero police presence, I called 911, but the cops never showed. Furious, I took to Twitter to call out Supervisor Breed, now running for mayor, for her lack of attention to the Haight. I pointed out nearly a week had passed since the homicide and carjacking, so apparently she was too busy on the campaign trail to hold a community meeting. I also recited my experience with the thug beating his pit bull, and that’s when a tweet popped up from Byron Philhour accusing me of using “racially coded language [thugs/pit bulls] to some-how position @LondonBreed as weak on crime.” I informed Philhour the thug was white, and he obviously didn’t know me very well because I’m a lifelong pit bull advocate and have a pit bull myself. But Philhour, whose wife Marjan, lost the race for District 1 supervisor in 2016 and now works for Breed, continued to rant that I was a racist. Soon more Breed supporters piled on.

All of this drips with irony, because Breed has refused to turn over the list of people she blocked on her own Twitter account for questioning her legislative acumen. On May 2, the Sunshine Ordinance Task Force asked the district attorney to enforce the law that requires Breed to turn over public records, which she has flouted six times in two years. She also failed to appear before the task force 10 times to explain why. If this sounds familiar, a court in New York recently found it unconstitutional for President Donald Trump, as a government official, to block people from Twitter for disagreeing with his politics. So eventually, Breed will have to comply.

Meanwhile back in the Haight, on Feb. 22 — a week after the homicide and carjacking — three men were found dead in front of a school after overdosing on a potent cocktail of methamphetamine, cocaine, and the synthetic opioid fentanyl. Unable to ignore it any longer, Breed called a community meeting, where she got an earful from angry residents. Afterward, she refused to answer media questions as she hopped in her car and headed for another campaign event. I continued to call Breed out for the state of the Haight, and her supporters continued to attack me.When I criticized her opponents this didn’t happen, so I decided to follow Breed’s troll trail, where I discovered Conor Johnston leading the charge. Johnston is the cousin of P.J. Johnston, Willie Brown’s former press secretary who now runs an influential Cow Hollow P.R. firm. The elder Johnston met Breed when they both worked for Brown, and they’ve remained close friends (in a 2016 San Francisco Magazine article on City Hall insiders, Breed described him as “her boo”). A little nepotism led to a job for nephew Conor as Breed’s legislative aide. Though he left his official role last year, he continues as a “periodic advisor” to Breed according to his bio, and is notorious for social media attacks on her foes so vitriolic that SF Weekly recently awarded him the title “Biggest Mayoral Race Troll.”

As soon as Breed’s fellow candidate Angela Alioto announced she planned to bring the sanctuary city law she authored when she was a member of the Board of Supervisors back to her original intent, which didn’t protect illegal immigrant felons, Breed’s troll patrol was out in force, even calling Alioto a Nazi. Breed herself condemned Alioto, tweeting that San Francisco “is and always will be a sanctuary city.” I found that hypocritical, considering Breed, in a 2013 interview with Haighteration, implied that Chinese immigrants were monopolizing public housing. “The people who are in these different public housing developments — and I’m not discriminating against anyone, but sometimes they’re not even U.S. citizens — we are not doing enough to look at the people who are here now,” she said.

Head troll Johnston immediately responded to my tweet, saying Breed “apologized and retracted those statements.” (True, after the Willie Brown machine began grooming her for bigger things.) With his trademark snark, Johnston said I didn’t know what the word “hypocrite” meant. It’s a word near and dear to his heart, evidently, as he shows up at Breed’s “hippo-critical” opponents’ events with someone in a hippo costume. In fact, Johnston was with his hippo friend outside the Jane Kim and Mark Leno “Meet the Progressives” event held in the Fillmore on May 12. Inside, raucous Breed supporters shouted racial slurs at Kim, who is Korean-American. One protestor called her a “skinny-ass rice-eating motherf****er.”

When a press release surfaced, sent out the night before asking Breed supporters to show up and “voice concerns about the motives of Leno and Kim,” rumors flew that Johnston was the instigator, which he denied. “As for the theory that I caused the protest, I’m growing tired of ‘progressives’ assuming that African Americans in SF only do things because a white guy tells them to …” he tweeted. He also said the Kim incident was “unfortunate.” Breed took a stronger stance, posting, “We all need to stand together to say that racism and this type of language have no place in our society or this campaign.” You would think Johnston and his troll patrol would have heeded Breed’s words, but it only seemed to embolden their rhetoric as they continued flinging the race card at anyone who disagreed with Breed or backed other candidates. 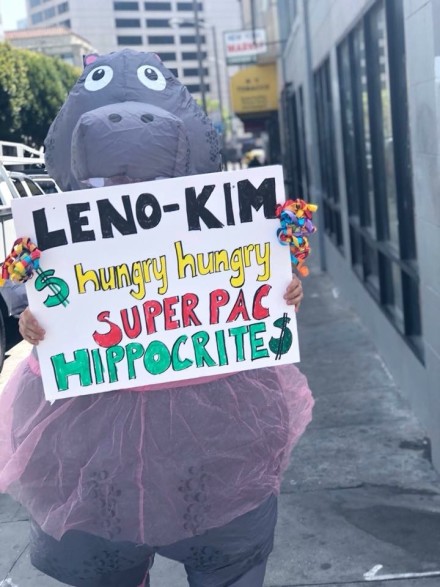 After they viciously attacked one Alioto supporter, she asked whether their thug behavior was indicative of the way Breed would run her cabinet as mayor. She was immediately surrounded by a virtual pack of hyenas, some of them prominent in the city’s political circles, like Wendolyn Aragon, who led the San Francisco Public Utilities Commission Citizens’ Advisory Committee. Telling Johnston she had his back, Aragon asked the Alioto supporter whether she served her “white lady liberal racism” on a porcelain dish with a side of foie gras, sprinkled on her over-priced Whole Foods salad, or snorted through a tightly rolled $100 bill. Gary McCoy, policy and community affairs manager for S.F. Recreation and Park, told the woman she wasn’t being attacked: “You just can’t accept facts, and you’re clearly racist.” McCoy’s husband, San Francisco Realtor Kory Powell-McCoy, said Alioto “may as well be campaigning in a white hood.”

I sent Johnston a private message, explaining I was writing this article and would like to know if Breed condoned the rampant bullying behavior on her behalf. He responded that my question was “ridiculous.” I asked several more times, but he deflected, saying my language was “dog whistle racism” and “at best, monumentally clueless.” Since then, Johnston has gone silent.

Politically speaking, I agree with Breed on many things (stronger conservatorship for the severely mentally ill, the need for more housing). I have praised and criticized all the candidates, but while Leno, Kim, Alioto, and their supporters have handled themselves with composure and maturity, Breed’s team has continually taken the low road. Because Breed is African-American doesn’t give her supporters carte blanche to call anyone who challenges her a racist, especially when they know nothing about the person they’re accusing.

In my case, I wrote a column asking for Chief of Police Greg Suhr to step down after a number of unarmed young men of color were shot in the back on his watch (“Yes, Suhr, it’s time for you to go,” Marina Times, May 2015). Breed, on the other hand, continued to support Suhr, calling him “a good man,” whom she remembered from her childhood in the Western Addition. Exactly one year later, among a growing chorus of supervisors and yet another shooting, Suhr was ousted. Breed was one of the last officials to call for Suhr’s resignation, for which she received criticism from some in the African-American community.

When Breed’s loudest advocates, a bunch of mostly white privileged males, cry “Racist!” at her political detractors, it lessens the impact of the word in a world where it needs to be more impactful than ever. I’m frankly shocked Breed didn’t tell her troll patrol to back off long ago. She’s tagged in most of the nasty tweet storms, so there’s no doubt she’s aware it’s going on. What does the fact she allows a campaign advisor to lead a Twitter terrorizing rampage on her behalf say about how she would behave as mayor, or about the type of people she would surround herself with in Room 200? If she does become the city’s next leader, let’s hope she cleans house.