Bureaucracy Inc.: If you think getting around the city is tough, try working with them

You hear a lot these days about how hard it is just getting around San Francisco between the construction, the traffic, and the congestion. The bottom line is that San Francisco is a small city, with just 47.355 square miles of land (if you include the water, it’s nearly 232 square miles), and for many years, left-leaning activists and legislators kept new residential building at a minimum. Then Mayor Ed Lee decided to welcome (or more accurately, bribe) the Silicon Valley with enormous tax breaks. The problem is that Silicon Valley is much larger, much more spread out, and made up mostly of single-family homes with two-car garages and plenty of free parking everywhere else.

San Francisco had a dotcom boom once before, which didn’t end well. There are plenty of pundits who believe dotcom boom 2.0 won’t end well, either, predicting that two to five years from now, many of the latest Internet darlings struggling to make a profit will go the way of Pets.com, or get swallowed up by bigger, more established companies like Apple and Google with working business models and real piles of cash. I’m in that camp, having gone through the first one and now witnessing the same mistakes being made. But for now, the influx of new residents is overwhelming every resource, especially the housing supply, which Mayor Lee obviously didn’t think about when he was handing out those tax incentives to companies like Twitter that blow through billions in venture capital hiring hundreds of new employees. Consequently, San Francisco rents are through the roof, and housing prices are, quite frankly, ridiculous. (Those thinking about paying a million bucks over asking for a one-bathroom fixer-upper in Glen Park would be wise to heed Warren Buffet’s famous words: “Be fearful when others are greedy and greedy when others are fearful.”)

I think it’s also fair to say that San Francisco hates cars. While I appreciate the utopian way of thinking (“Knock out parking spaces for bike lanes and everyone will ditch their cars and bike to work!”) it’s simply not realistic. Baghdad by the Bay has become Bicyclists by the Bay, to the frustration of drivers trying to stay three feet away from them (thanks to a new state law) on narrow, crowded city streets while not sideswiping 12 construction workers and a Muni bus in the next lane.

You would think a city with one employee per every 23 residents and that pays nearly $3 billion a year for their services could put their 35,771 heads together and come up with a better plan. Then again, the fact that City Hall is bulging at the seams with workers, many of whom are redundant or irrelevant, is likely the reason that will never happen. Case in point: the Marina Times’s recent dealing with San Francisco Outreach Advertising, a program designed for underserved or hard-to-reach audiences like those reached by community newspapers.

We participated in FY 2013-14 and FY 2014-15, and in both of those years the application process was tedious and overly complex. It involved setting up the usual vendor requirements, agreeing to bid and contract conditions, providing proof of circulation and printing, and passing scrutiny by the purchasing office, which then sends it to the Board of Supervisors for approval. The paperwork is daunting: 11 documents require completion or signature; the “Bid and Contract Conditions” section is 31 pages long; there are two addendums, and 57 total pages. The value to the Marina Times is less than $500 a month. Compare that to the way it works with our other advertisers: Number of conditions, pages to complete, referrals: zero. Number of pages involved to secure the contract: one. Obviously, the city is trying to cover its behind, because that’s what bloated bureaucracies do, but it also keeps a lot of people at City Hall busy by generating superfluous steps and piles of paperwork for a program with a budget of around $40,000.

While the qualifying process in the previous two years was difficult, this year the city raised the bar by asking publications to provide proof of insurance, including $2 million commercial liability, $1 million commercial automobile, and $1 million professional liability (maybe they got our contract mixed up with Uber’s). The expense of these new insurance requirements is approximately the value of the contract. I spoke with a friend who spent more than four decades in the industry working for both small and large publications who said he had never been asked by an advertiser to provide proof of insurance because it isn’t necessary. Of course, generating superfluous steps and piles of paperwork is the city’s M.O., whether the project is $40,000 or $40 million.

In a creepy Big Brother turn, the Outreach Program also now requires three referrals from current customers — they want to know who you’re doing business with and for how long, and they want their contact information (we were tempted to name the Outreach Program as one of the references, since we’ve already done business with them for two years). Once the contracts are awarded, the city must create ads for the various publications, which brings more staff into the mix to execute, evaluate, approve, and transmit the ads. I have no doubt the money spent exceeds the budget of the program. Streamlining would certainly reduce the city’s costs and potentially make more funds available for participating publications, but we’re talking about a drop in the bucket for San Francisco, where a nearly $9 billion budget is considered lean. Because Mayor Lee expects revenues to continue rising, there won’t be any cuts. There will, however, be 1,178 new city jobs. 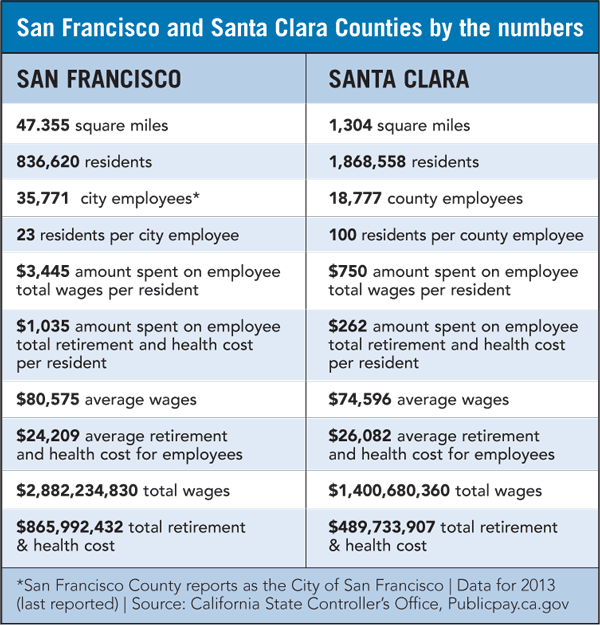