The truth is incontrovertible.
Malice may attack it and ignorance may deride it,
but in the end, there it is.
—Winston Churchill

At a meeting of the San Francisco Council of District Merchants (DCM) held July 16, 2013, Michael Levy, co-owner of Pet Food Express (PFE), was invited to speak. Kathleen Dooley represented the San Francisco Pet Store Coalition, asking the council to send a letter to the Planning Commission denouncing efforts by PFE and the Pets Unlimited Cat Adoption Center to move into 2460 Lombard Street.

If her name sounds familiar, it’s because I wrote a column last month about the railroad job against PFE taking place at the Small Business Commission (SBC). Dooley, who helped form the pet store coalition to keep PFE out of the same building in 2009, held secret “subcommittee” meetings and was present at full commission meetings where the coalition was invited to present and PFE was not. The meetings resulted in Dooley representing the SBC several times before the Planning Commission in opposition to PFE.

Prior to the DCM meeting, requests for ethics violation investigations of Dooley, SBC secretary Chris Schulman, and Office of Small Business Executive Director Regina Dick-Endrizzi had been submitted. Dooley is either incredibly arrogant or feels she’s untouchable because of her close relationship with Board of Supervisors President David Chiu — in fact, both Dick-Endrizzi and Chiu were in attendance to present another item before the DCM when Dooley spoke for the coalition (I guess they don’t have a problem with her violating at least two Conduct of Governmental Officers codes). 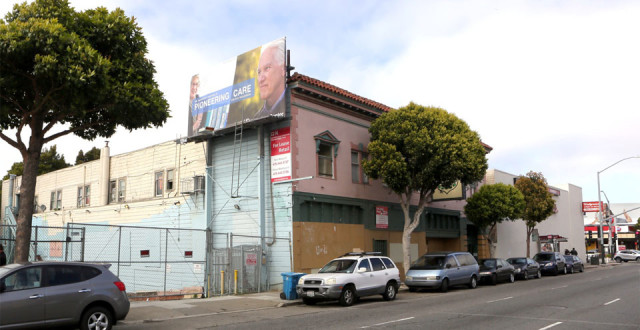 Dooley also sent a letter to the DCM claiming the only reason I write articles criticizing her and the coalition is that PFE pays all our printing bills, which is blatantly false — then again, Dooley has a history of saying things she can’t back up, like potential buyers of the long-shuttered Pagoda Theater in North Beach were connected to a Mexican drug cartel, or that Lowes in South San Francisco was closing and Walmart wanted to move in.

This is just the latest in a bizarre political soap opera to keep PFE and co-applicant Pets Unlimited Cat Adoption Center out of the Marina, which also involves two neighborhood groups, the Marina Community Association (MCA) and the Marina Merchants Association (MMA), both of which have been bullied by a vocal minority of members that include Pam Hable of Catnip and Bones, and Susan Landry and Peter Weaver of Animal Connection II, who believe their Chestnut Street stores should be exempt from competition (although Animal Connection opened a store next to PFE in Burlingame, so I guess it doesn’t go both ways). The intensely negative and personal campaign against PFE has brought constructive activity to a screeching halt and fractured both groups.

The MCA board of directors, which came out against PFE for a variety of nonsensical reasons but refused to be transparent about their balloting practice, has lost key members, including the group’s founder. At the MMA, there’s been a mutiny led by Hable, Landry and Weaver, and former DCM president and two-time MMA president Jim Maxwell. Regular MMA meetings often garner little to no attendance; however, the mutinous minority swarms any meetings regarding PFE and corrupts the voting process.

Maxwell (who has been both my friend and a writer for the Marina Times for a decade) has been waging a behind-the-scenes battle against PFE that I frankly don’t understand. He can’t be opposed to competition, because his firm, Architects II, has designed over 100 restaurants — including Paxti’s Pizza and Hole-in-the-Wall Pizza in the Marina, which are only a few blocks apart. It also can’t be “big versus small,” because one of his projects, Dosa — the 6,100 square foot Indian restaurant on Fillmore Street — casts a huge shadow over Indian Palace, a tiny eatery there long before and less than a minute away. And it surely can’t be about formula retail, because his frequent collaborator on Dosa, Paxti’s (which is now a national chain), and other projects is R3 Builders, a development company with an impressive portfolio of formula retail that includes 39 Trader Joe’s, 67 Blockbusters, and, most ironically, four Petcos. R3 also built five CVS stores in San Francisco and may soon be working on a sixth, as the Planning Commission recently approved a CVS for the Castro. (San Francisco’s “formula retail ordinance” was passed to keep out national behemoths like CVS, which has over 7,600 locations, but it’s obviously not working.) Maxwell wasn’t at the Planning Commission to protest any of the CVS stores (obviously a conflict of interest); he was also a vocal promoter of Apple coming to Chestnut Street and has no issues with Sur la Table opening on Union Street this fall.

The campaign against PFE has brought constructive activity to a halt

Whatever Maxwell’s beef is with PFE, he seems willing to risk friends, clients, and his reputation to keep them out. On July 15, the day before the DCM meeting where PFE was slated to speak, Maxwell asked MMA treasurer Ryan Fuller of Wells Fargo Bank for a check to bring the MMA’s dues with the council current (it was two years behind). In e-mails obtained by the Marina Times, Maxwell offers to pick up the check and drop it off at DCM president Henry Karnilowicz’s office. He then sends an e-mail to MMA president Ferris Ferdon asking if Ferdon has sent a letter yet to Karnilowicz regarding “PFE and request to support the MMA’s opposition.” When Ferdon replies the letter won’t oppose or support PFE, Maxwell counters, “I thought at the MMA meeting we voted to send a letter … Since I made that motion I was pretty sure that was what was voted on and approved.” Ferdon responds: “The vote was contrived … PFE is not going to put Pam’s or Susan’s store out of business … Why do you guys want empty storefronts? … I am not going to throw all the other merchants that were railroaded, or influenced about their vote, or quite frankly had no idea of the dirty politics going on … under the bus.” Later, Ferdon says, “Jim, do you want Chestnut St. to be successful? Stop the politics.” Despite all of this and without Ferdon’s consent, Maxwell had Fuller send the letter to the DCM anyway.

Maxwell then went to Karnilowicz requesting that the Lombard Business Merchants Association, a year-old neighborhood group with over 40 members, not be allowed to join the DCM because the by-laws state only one group representing a street can be on the council, and the MMA represents Lombard (a key reason for Maxwell wanting to bring the MMA dues current). In a phone interview, Karnilowicz was perplexed: “Jim introduced me to the president of the group, Mr. Awadalla, months ago and told me the MMA was fine with them joining; he said Awadalla was both a client and a friend. As long as the MMA is fine with it, we can let them join, but now Jim says the MMA doesn’t support it.”

Awadalla says he, too, is baffled as to why Maxwell — a friend for many years who also designed his restaurants — would turn on him. Interestingly, many Lombard Association members support PFE, hoping that a destination retail anchor will bring much-needed foot traffic to the declining interstate, which has 17 vacant storefronts that attract crime and homeless encampments.

The Union Street Association, which enthusiastically supported Sur la Table, sent a letter to the Planning Commission regarding PFE after a survey showed broad support. On July 12, 2013, executive director Lesley Leonhardt wrote that PFE and co-applicant Pets Unlimited Cat Adoption Center represent “a positive addition to the district and will not adversely affect the local pet stores.” She also pointed out that in fact “many respondents felt that healthy competition is necessary to achieve a vibrant economic atmosphere.” She urged the Planning Commission to “approve the application for conditional use.”

Community liaison Michael Williams, who specializes in consensus development and merchant support services, conducted the survey and says he’s done many just like it for Marina businesses over the past eight years. “The Planning Commission has publicly applauded my work,” he said by phone, “and never has my methodology been questioned.” In other words, every survey and letter of support has been conducted in exactly the same manner and gone off without a hitch — until now.

When Union Street Association president Eleanor Carpenter returned from a trip to Paris, sources tell the Marina Times she was confronted by Hable, who complained proper outreach wasn’t done and insisted the letter be retracted. Not only is Hable not a member of the association, but the MMA, to which she does belong, has been aware of the survey since October 12, 2012, when board member Fuller wrote, “Michael, I agree this is a good idea. You have our official blessing to conduct this survey/poll.”

In an e-mail dated July 19, addressed to the planning department and copied to Hable and District 2 Supervisor Mark Farrell’s office, Carpenter asked that the letter of support for PFE be disregarded: “We did not follow the proper protocol,” Carpenter says. “The letter was a premature honest mistake.” (I e-mailed Carpenter, who said she had “no comment” on the matter.)

In threatening, sometimes vulgar phone calls to the Marina Times office and in activist-style form letters sent to the Planning Commission, Hable and her supporters have called me a shill for PFE and accused PFE of only helping animal rescue for political favor, despite the fact we both have long histories of animal advocacy (see article on page 30).

As a rescue advocate, of course I’m thrilled that PFE partners with us to showcase adoptable animals; I’d also love to see more cats adopted through the Pets Unlimited Cat Adoption Center. As a journalist, I’m known for taking on the big guy when the little guy is being treated unfairly — it just so happens this time the big guy is the little guy, but the elements remain the same: hypocrisy, cronyism, egotism, and deceit. I despise dirty politics, and the campaign against PFE is so filthy it makes me want to take a shower.