I know why Kate loved elephants

On July 1, a vivacious 32-year-old woman named Kate Steinle was walking along the Embarcadero’s Pier 14 with her father when she was struck in the chest by a bullet. The shooter, an illegal immigrant named Juan Francisco Lopez-Sanchez, had five previous convictions for re-entry after deportation and seven prior felony convictions. In a jailhouse interview with ABC7 News, he confessed to the killing and said he came to San Francisco because it was a “sanctuary city” where he wouldn’t be turned over to U.S. Immigration and Customs Enforcement (ICE). When Sanchez, in jail on an old drug warrant, was released in April, San Francisco Sheriff Ross Mirkarimi ignored an ICE detainer requesting notification before Sanchez’s release. Adding fuel to the flames, one month prior Mirkarimi issued a memo to deputies barring them from communicating with federal immigration agents, setting off a national debate that quickly became a political firestorm.

While Kate’s family acknowledged the legal issues, what they wanted most was to celebrate her life. As I combed through dozens of news stories, I found out a lot about the case but not much about Kate. Some mentioned her infectious smile, her kindness, and her adventurous spirit. Others talked about her background (originally from Pleasanton, Kate graduated from Cal Poly in San Luis Obispo, worked in medical device sales in Mountain View, and had just moved to San Francisco to live with her boyfriend). Sometimes there were links to the charities Kate loved, so I followed those links and discovered that Kate volunteered with the Challenged Athletes Foundation helping disabled athletes reach their goals. She also supported the Performing Animals Welfare Society (PAWS) because she loved elephants. She worked to help a group of nine at ARK 2000, a PAWS sanctuary providing rescued pachyderms with hundreds of acres of natural terrain. I instantly felt a connection with Kate, because I have a long history with elephants. 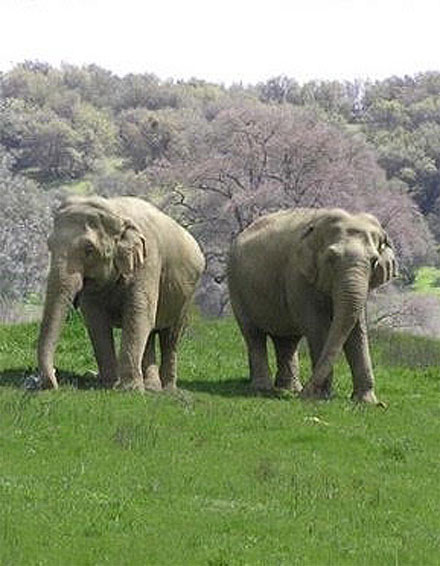 On my mother’s side, I’m from a Sicilian fishing family. My father came from Irish and Ukrainian stock, some who travelled with Ringling Bros. and Barnum & Bailey Circus. They weren’t performers — my uncle was a well-known artist, my grandfather was a rigger, and my father was a back yard cook — but circus life was in their blood. When my parents married, my mother insisted that my father stop riding the rails, but every time Ringling Bros. came to town he took me to every show, where we had access to areas off limits to the general public.

One day while my father was catching up with old friends in the train cars, I wandered off and found the elephant tent. It was several hours before the matinee, so the handlers were outside smoking and flirting with show girls. There were a dozen Indian elephants connected with heavy chains around their ankles and the chains were attached to giant metal spikes driven into the ground. They rocked nervously from side to side in silence except for the occasional snort. Right in front was a mother and her baby. The mother towered above me, and I could see scars behind her ears from the bull hook — a barbaric stick with a metal hook at the end used for goading elephants into submission. As the mother rocked, she wrapped her trunk around her baby, trying to protect him from the world. When I looked past her long, thick lashes and into her dark brown eyes I saw an unbearable sadness. The baby nuzzled his face into his mother’s elbow and that’s when I noticed fresh blood behind his ear from the bull hook. I couldn’t imagine the despair that mother elephant felt being unable to save her baby.

For years my father and I agreed to disagree about wild animals in the circus. For him, it was synonymous with the Greatest Show on Earth; for me, it was cruel and unnatural. Elephants are extremely intelligent. They form strong family bonds and feel love and grief and emotional anguish. Like Kate, I began supporting PAWS, and I wrote columns about ending the use of wild animals as entertainment.

On April 21, San Francisco supervisors voted unanimously to ban exotic animal performances, giving a voice to the voiceless. Exactly three months later on July 21, Kate’s father Jim Steinle did the same when he spoke before the House Judiciary Committee’s Subcommittee on Immigration and Border Security to call for legislation to keep immigrant felons of the streets. Steinle recalled the day his daughter was killed as they were walking hand-in-hand along the pier and a shot rang out. Kate collapsed to the ground and said, “Help me, Dad.” Though Steinle performed CPR before paramedics arrived, he couldn’t save her — a bullet had pierced her aorta and she died at the hospital two hours later.

I remembered back to the day I stood before the elephants. As the matinee approached, handlers barged into the tent and began unchaining the herd. “Get back, kid,” one man shouted, so I moved behind a hay bale. The elephants were lined up by size and ordered to “tail up,” each grabbing the tail in front of them with their trunk. As her baby was torn from her side, the mother broke rank and let out a mournful wail, causing one handler to strike her legs with a bull hook. The baby resisted being separated from his mother, so another handler used a bull hook to drag him to the back of the line. I could hear the mother wailing and the baby crying as they disappeared down the hallway.

I know why Kate loved elephants. Because they’re kind, gentle, innocent souls who don’t deserve to be born into a world where their parents can’t save them from evil, just like Kate herself.

If you would like to make a donation to PAWS in Kate’s memory, please visit pawsweb.org/donate_online.html. All donations will be used to care for the nine elephants Kate worked to help at the ARK 2000 sanctuary.