The grift that keeps on giving

From fudging failed figures to spending $500,000 on a self-serving study, harm reduction provider HealthRIGHT 360 wants to keep their golden goose 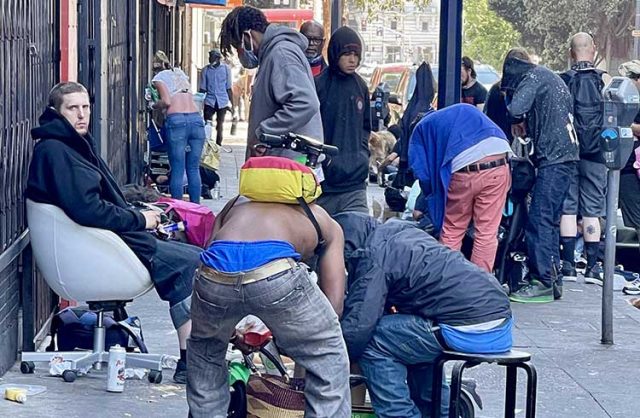 “Eisen visibly bristles when people, even in jest, refer to the organization as an ‘empire,’ but acknowledges that her vision all along has been to expand HealthRight 360’s services.”
— From a 2016 profile of San Francisco Chronicle Visionary of the Year nominee, Vitka Eisen, CEO of harm reduction nonprofit HealthRIGHT 360

Full disclosure: I have been a critic of San Francisco’s multibillion-dollar homeless and “harm reduction” industries for over a decade. In numerous columns, I opined about the absolute failure of the players involved, including the Coalition on Homelessness, which serves as a de facto marketing agency for allowing human beings to barely survive in filthy tents because it’s “their right” to do so. I am certain the Coalition and a number of other San Francisco “nonprofit partners” see me as the Grinch, not only in December but during every month of the year. Several members of the Board of Supervisors also feel this way. District 5 supervisor Dean Preston even tried to prevent the Marina Times from participating in a city funded advertising program partly because, in his opinion, I “hate the homeless.” That’s not at all true, of course, but I have been extremely critical of the incompetence and grift. Let’s just say if CEO Tim Cook ran Apple into the ground the way city officials and their nonprofit partners have done with San Francisco, he would be kicked to the curb. Have I advocated for the curb kicking of complicit city officials like Preston, who once handed out dozens of tents to transients in his district? You bet I have. For a very long time it seemed I was the only one paying attention to the billions of dollars handed out to hundreds of organizations with zero oversight and zero results. But as the money flows and the problem grows, it seems more people are coming around to my way of thinking.

In a critical 2020 performance audit of the Department of Homelessness and Supportive Housing (DHSH) by the Budget and Legislative Analyst, the department’s budget was $364 million — an 80 percent increase since its inception under the late Mayor Ed Lee in 2016. And the results? The number of people without permanent housing grew by 30 percent between 2017 and 2019. As of that March 2020 audit, DHSH had contracts with 59 providers for 350 programs with total funding in FY 2019–20 of $240.6 million.

The competition for those nonprofit millions is fierce, so it should come as no surprise that organizations like HealthRIGHT 360 (HR360) are willing to do anything to keep their slice of the golden goose. A purveyor of harm reduction, HR360 is best known for teaming up with the San Francisco Department of Public Health (DPH) to run the controversial Tenderloin Linkage Center. Proposed as a hub to connect substance abusers with services, it instead became a free-for-all “safe consumption site,” where anyone could use drugs and, if they overdosed, be revived by staff using opioid antidotes like Narcan. Overdoses that occurred outside the center’s well-guarded walls were 7 percent more likely to result in death, according to a recent study (more on that study later). Tenderloin residents were unimpressed, even angry, with what they saw — drug dealers and users flocking to the area, and a facility so enigmatic even I couldn’t get inside after revealing to security personnel that I was a journalist. “So let me get this straight,” I said to one very large man. “I can come in if I want to shoot fentanyl but not if I want to shoot what’s happening in there for a story.” As he nodded yes I leaned around him to snap a photo with my iPhone, but he put his hand in front of the lens. “No pictures allowed,” he said sternly.

There’s a good reason for the center’s secrecy. One worker, who spoke to me on condition of anonymity, told me about a guest known by other homeless for doing sexual favors. “Today she came to the center telling everybody she ‘needed dick,’ wearing a blonde wig and leopard-print handcuffs as she was walking through. Telling her to stop just made her do it more. It’s so absurd really. Nothing makes sense in the field.” The worker also pointed out that “drug tourism” isn’t an anomaly to San Francisco. “When Colorado legalized cannabis it attracted tourists from neighboring states with more restrictive laws. People who use drugs come to places like Los Angeles, Oakland, and San Francisco because it frees them from legal constraints with an abundant supply of whatever your drug of choice is. You can get them anywhere, but it’s not the same. There is so much less tension and pressure from external forces to behave.”

While this may be the reality at the center, it’s not what San Francisco sold to the public. In a “Frequently Asked Questions” segment on the official government website this past spring, the answer to “Will drug use be allowed on site?” was “no,” and it was unequivocal: “This is not the city’s safe consumption site. The site will not include medical oversight for safe drug use. However, guests may arrive at the facility after having used drugs. In order to promote safety, site staff will include community and peers who are trained in overdose prevention and harm reduction to monitor and engage with guests who may be experiencing the effects of recent drug or other substance use.”

As criticism of the center grew so did HR360’s desperation to keep their lucrative deal, leading vice president of public affairs and policy Gary McCoy to fudge the figures in an attempt to make the program look more successful than it was.

Gina McDonald, co-founder of the advocacy group Mother’s Against Drug Deaths (MADD), obtained emails through public records requests revealing that DPH officials actively conspired with HR360 executives to minimize McCoy’s fabrication. In a Feb. 8, 2022, email to colleagues, Dr. Rob Hoffman, special project manager with the DPH, wrote, “I think Gary is just making up random numbers.” That was in reference to the 659 “meaningful engagements” recorded by staff for the week ending Feb. 7, 2022. Hoffman said he and a coworker had visited the linkage center over the same period, writing: “I observed the HR360 staff and did not see anything that can account for the high numbers of meaningful engagements.”

Alison Hawkes, DPH director of communications, personally modified a response to press queries that replaced words like “mistake” and “inaccurately” with a sprinkle of public relations magic. The original statement, written by Dr. Matthew Goldman, read, “Part-way through the most recent reporting period, the TLC metrics team discovered that one of the CBOs was inaccurately recording data on engagements. … This mistake has since been resolved.” Hawkes reworked it to say, “one of the providers at the site was defining engagements in a way inconsistent with other teams on the site.”

But even public relations magic couldn’t erase the damning numbers compiled by McDonald, who helped create MADD after her daughter became an addict in the Tenderloin neighborhood: Between January and March of 2022, just 18 of the 23,367 visitors to the Tenderloin Linkage Center — or 0.08% — had been referred for medical or substance abuse treatment, and there was no way to track them.

The word “linkage” was later dropped from the name, and the center is slated for closure on Dec. 4. That doesn’t mean DPH is giving up — in fact, they’re looking to open additional sites based on the same model, and HR360 wants a slice of that golden goose, too.

Last month, DPH released a study claiming open air drug use and drug paraphernalia litter had decreased nearly 20 percent since the Tenderloin Center opened compared to the same area in 2019. According to the project contract, the city paid Alex Kral of the North Carolina-based Research Triangle Institute nearly $335 per hour for 100 hours of “work.” The total cost of the study came in at nearly half a million dollars, which also covered two people walking each Tenderloin block one time in 2018, 2019, and 2022. The cost, however, isn’t nearly as shocking as the client listed on the contract: none other than that lover of golden goose HR360, executed by President and CEO Vitka Eisen on April 14, 2022. The ceiling for billable hours was set at $499,815, and the billable hours came in at — you guessed it, $499,815. The contract states these rates are “exclusive of travel, equipment, subcontracts, and other direct cost items, which will be billed separately.”

HR360 has millions of reasons to want to keep their position as one of City Hall’s favorite recipients of tax dollars — with revenue of $144,275,651, they spend $64,822,045 in salaries and wages, which includes over $2 million in executive compensation. Nine officers make between $234,000 and $312,450 annually. The most highly compensated is CEO Vitka Eisen.

Medical Director Ako Jacintho makes nearly $253,000 annually, despite the fact his medical license is limited on practice due to probation, which lasts through May 21, 2023. According to the Medical Board of California, Dr. Jacintho admitted to “gross negligence, repeated negligent acts, incompetence, failure to maintain adequate and accurate medical records, altered, modified, or created false medical records, and prescribed drugs without prior medical examination or indication of care and treatment.”

In December 2021, Mayor London Breed announced a State of Emergency in the Tenderloin district, allowing city officials to “bypass the bureaucracy and expedite the process of increasing social services to help mitigate drug overdoses.” The Tenderloin Linkage Center sprang from that declaration. In a statement on the HR360 website, Eisen wrote, “There is a tired old trope about San Francisco being ungovernable because we can’t agree on things, but you won’t hear that from me. If you think I’m going to defend the status quo in the Tenderloin, I hate to disappoint you.” One year later, it’s safe to say she has disappointed us — and unless city officials start paying attention to where each slice of the golden goose goes, it surely won’t be the last time.