Yes, Suhr, it’s time for you to go

Chief Suhr appears before the Board of Supervisors Public Safety Committee to discuss racist and homophobic messages shared by his officers. photo: San Francisco Govtv
by Susan Dyer Reynolds

When my godfather, Ward O’Connell, was the diving coach at Yale University, he often came home complaining to my godmother, Joel, about what everyone else was doing wrong in the department. “The damn kids don’t listen,” he would say, or, “The aquatics director doesn’t get it.” One afternoon when Ward walked in complaining, Joel looked at him and said, “Maybe it’s the coach.” That phrase became synonymous in my family for not taking responsibility from the top down.

“Maybe it’s the coach” was certainly fitting last season for the San Francisco 49ers: As their record on the field sunk and their record off the field rose (eventually leading to the dubious distinction of “most arrested team in the NFL”), I suggested that it was time to take a look at Coach Jim Harbaugh (“Are the San Francisco 49ers a bunch of thugs?” May 2014). Six months later, Harbaugh was fired. Whether you agree that Harbaugh was the problem or you believe he was the sacrificial lamb, it is indisputable that when you’re the boss, you better run a tight, clean ship — because if you don’t, you’ll eventually be walking the plank. The beleaguered San Francisco Police Department is currently facing that dilemma, but so far Chief Greg Suhr has remained at the helm.

There’s a lot of San Francisco history behind the Suhr name. His great-grandfather founded Tadich Grill in the 1880s, his grandfather served on the Board of Supervisors, and Suhr attended St. Ignatius and USF. Suhr joined the SFPD in 1981 and rose through the ranks to become captain of the Bayview and Mission stations, and Deputy Chief of Field Operations, the largest bureau in the department with more than 1,400 officers. In April of 2011, Mayor Ed Lee appointed Suhr chief of police to replace George Gascón, who had been elected District Attorney.

While Suhr’s journey to the top may seem impressive, the path was wrought with missteps. In 2003, Suhr was charged with conspiracy to obstruct justice in the “Fajitagate” scandal, where three off-duty officers were accused of beating up two men in the Marina District over a bag of Mexican food. Suhr was later cleared in that incident, but in 2005 then-Chief Heather Fong stripped Suhr of his Head of Patrol title after an officer was badly beaten and suffered a fractured skull responding to a protest. He was given the Hill Street Blues equivalent of desk duty, reassigned to man security for the city’s Public Utilities Commission. In September 2012, Suhr became the highest paid police chief of any major American city with a salary of $307,450 — nearly 10 percent more than the mayor who appointed him and one-third more than California Gov. Jerry Brown. Critics pointed out that New York City’s chief made just over $200,000 in 2011 serving a city with 10 times the population of San Francisco.

In 2013, Kelly O’Haire, a former internal affairs attorney for the SFPD, filed a lawsuit against Suhr and the city, alleging she was fired in retaliation for her investigation of misconduct charges against Suhr stemming from his failure to report an incident of domestic violence. On a Friday night in 2009, then-Deputy Chief Suhr received a call from a female friend who said her boyfriend was beating and strangling her. The woman’s collarbone was broken, yet Suhr didn’t arrest the suspect and he waited until Sunday to file a report. California requires law enforcement officers to immediately make an arrest in domestic violence cases where the suspect is known and to file a report within 24 hours. The suspect was later charged with attempted murder. O’Haire prosecuted the case before the Police Commission, which resulted in a demotion for Suhr. During the initial investigation, O’Haire said that Suhr’s politically connected attorneys repeatedly threatened her, even calling to say her actions against Suhr were “going to be a future employment problem,” and that she was “going to be sorry.” O’Haire spent more than two decades as an undercover officer and assistant district attorney in Marin County before joining the SFPD in 2006, where she was fired two weeks after Suhr was appointed chief. In March 2015, a judge refused to dismiss the lawsuit, saying a jury could conclude that Suhr retaliated against her illegally. He also ordered Suhr to testify. On April 24, just before jury selection began, the city settled the case for $725,000.

I’m not at all surprised at O’Haire’s accusations, having witnessed Suhr’s bullying and grudge-holding firsthand. When a city department source alerted me to a problem related to the SFPD, I wrote an article about it. The problem was subsequently fixed, but my source received an unpleasant call from Suhr, who didn’t appreciate being painted in what he considered an unflattering light. Months later my source was fired, and while I can’t say for certain that Suhr was the reason, I have little doubt he was involved.

You’d think the chief would have better things to do than intimidate city employees, especially since his own department is such a train wreck. His predecessor, District Attorney Gascón, believes it’s so bad that he recently formed a task force to dig into allegations of corruption, misconduct, homophobia, and racism throughout the city’s law enforcement structure, and there’s plenty to keep them busy.

The same day O’Haire’s case was settled, an attorney for the family of 20-year-old Guatemalan immigrant Amilcar Pérez-López, who was killed by police in the Mission last February, announced the filing of a federal civil rights lawsuit that claims three eyewitnesses, post-shooting photographs, and an independent autopsy directly contradict Suhr’s account. The autopsy determined that all six bullets entered Pérez-López from behind, including one to the back of the head, while his arms were at his side. At a Town Hall meeting days after the incident, Suhr told the community that Pérez-López was charging the officers with a knife held over his head, corroborating the report by his two plainclothes officers who said they shot a lunging, knife-wielding Pérez-López “in fear for their lives.”

Richard Hastings, a 13-year veteran of the SFPD, was named in a federal civil rights lawsuit stemming from the 2011 death of 19-year-old Kenneth Harding, who police say “accidentally shot himself” during a gun battle with Hastings and another officer after allegedly evading a $2 bus fare. In April of 2012, San Francisco Police Commission President Thomas Mazzucco awarded the Gold Medal of Valor to six police officers, including Hastings. In January 2015, Hastings was charged with nine felony counts of lewd and lascivious acts on a 15-year-old boy and one felony count of possession of child pornography.

In February 2015, 32-year SFPD veteran Ricci Rodriguez “retired” after allegations surfaced that he took kickbacks from Nelson Towing, which got 84 percent of the jobs in the Bayview-Hunters Point area when Rodriguez handled the calls. Satellite technology for Google Maps also caught an undercover vehicle parked at Rodriguez’s home on the Peninsula, where he allegedly kept it for personal use since it was assigned to the Bayview station five years ago.

In January 2015, former undercover officer Arshad Razzak was convicted of illegally searching the rooms of drug suspects and falsifying police reports to make the searches appear legal. In a separate case in February against another plainclothes unit, San Francisco police Sgt. Ian Furminger was sentenced to over three years in prison for his role in a series of thefts from drug suspects after a jury convicted him of wire fraud, conspiracy against civil rights, and conspiracy to commit theft. U.S. District Judge Charles Breyer said the sentencing marked “a day of shame.” Judge Breyer also sentenced Furminger’s co-defendant, Edmond Robles, to 39 months in prison for “widespread and consistent” illegal activities.

On March 13 2015, racist, homophobic and threatening text messages recovered from Furminger’s cell phone were revealed in a court filing by federal prosecutors opposing Furminger’s bid to remain free on bail while appealing his conviction. The texts implicated as many as 14 SFPD officers. Furminger repeatedly calls another officer a “fag,” and makes racist comments about African Americans, Mexicans, and Filipinos. In one exchange an unnamed officer texts “White power,” (which Furminger later repeats a number of times). Furminger responds, “N—ers should be spayed. I saw one an hour ago with 4 kids.” The other officer replies “Cross burning lowers blood pressure! I did the test myself!” Furminger says, “All n—ers must f—ing hang. Ask my 6 year old what he thinks about Obama.”

In early April 2015, Suhr vowed to fire the five officers “who engaged in such repulsive conversations via text messages” that “their conduct is incompatible with that of a police officer.” (Several other officers, Suhr said, participated in single events that didn’t rise to the same level, though they could face suspensions.) At a Board of Supervisors Public Safety Committee meeting about the scandal, Supervisor Eric Mar asked Suhr if the texts represented “a broad-based problem.” Suhr didn’t answer the question, instead telling Mar, “I have bias; everybody has bias.” He also stated that the text messages in the federal filing took him “completely by surprise.” Lawyers representing the officers facing termination, however, say police brass knew about the remarks as far back as 2012, when one of the officers received an internal affairs letter confirming that the department had the texts. As if the story isn’t cringe-worthy enough, under California’s Public Safety Officers Procedural Bill of Rights Act, once a department is made aware of misconduct, it has only one year to act — which means Suhr may not be able to fire those repulsively racist, homophobic cops after all.

Despite all the disgraceful conduct under his watch, I have yet to hear a single official or rank-and-file officer call for Suhr’s resignation. This is in stark contrast to what happened to Fire Department Chief Joanne Hayes-White in October 2014, when firefighters voted that they had no confidence in her leadership and the fire commission met to discuss whether she should keep her job. The heads of every employee group as well as the battalion chiefs submitted letters to Mayor Lee expressing “a grave crisis of confidence” in Hayes-White. “It’s not a personal attack,” San Francisco Firefighters Local 798 secretary Lt. Floyd Rollins II said at the time. “It is a business decision about the direction of the department that we all work for.”

Appointed in 2004 as the city’s first female fire chief, Hayes-White’s tenure has not been without tribulations, from slow ambulance response times to firefighters accused of drinking on duty to the death of a young woman run over by two department trucks after the Asiana Airlines crash at SFO. Mayor Lee has thus far rejected calls for Hayes-White’s termination, but like other officials, he has remained silent regarding what responsibility Chief Greg Suhr bears for a troubled police department in which the entire city is having a grave crisis of confidence. Perhaps there is a double standard for Hayes-White, or it could be Suhr’s powerful political connections. Whatever the reason for the silence on Suhr, one thing is clear: Even if it is the coach, the team is standing behind him. 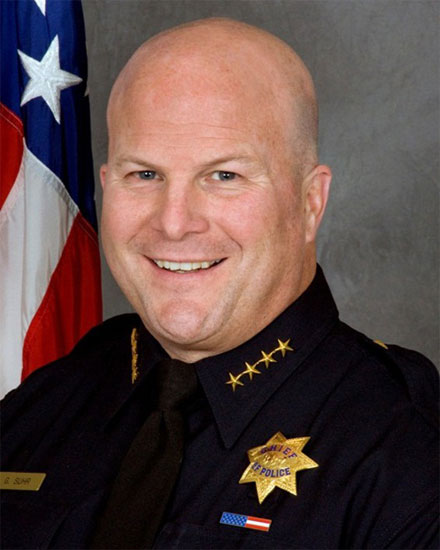