Playtime is a twist on Jacques Tati’s 1967 film and takes place in London, Reykjavik, and Dubai, places feeling the effects of present-day economic change. Real-life individuals react to market collapse in each city under different circumstances.

Kapital shows Julien at a public talk in the Hayward Gallery in London with Marx scholar David Harvey where they discuss the impact of modern capitalism in the contemporary world.

Better Life (Ten Thousand Waves) features footage from a call-and-rescue helicopter during the 2004 Morecambe Bay tragedy when 22 Chinese cockle pickers died in rising tides off the coast of England. Julien collaborated with prominent Chinese artists reflecting what it means to seek a “better life.”

Sanctuary runs through March 11, and is organized by the For-Site Foundation (the Presidio’s Homeland Security and @Large: Ai WeiWei on Alcatraz, among others). It features artist-designed rugs which, utilizing traditional materials and techniques, examine the theme of sanctuary during an era of increasing migration clashing against attitudes of isolationism and nationalism. Many of the artists have been migrants and refugees themselves; they represent racial, cultural, and religious diversity under the banner of a single idea. 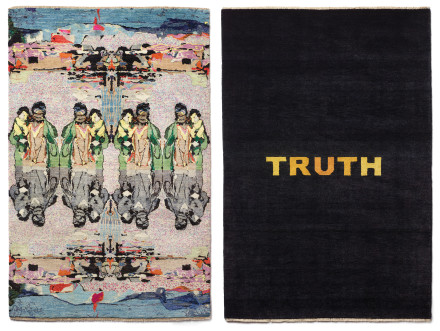 Rugs traditionally represent the places and people who use them and are deeply ingrained with cultural symbolism. Work from 36 international artists are on display in a space known as The Chapel, a decommissioned military chapel. Here, the rugs take on the symbolism of prayer and worship while the viewer considers place, identity, and belonging. The symbolism of the rug as being transportable — able to be rolled up and taken with a person with relative ease — reinforces the sense of transient populations and migration. The four-by-six-foot wool rugs make us consider the right to safe haven and the natural desire of all human beings for home and a sense of acceptance.

“Rugs speak broadly to cultural heritage, family history, and transportable identity,” says Cheryl Haines, For-Site executive director. “At a moment in time characterized by growing nationalism and isolationism, we must acknowledge the importance of recognizing our common humanity, as well as the need for compassion and the provision of safe harbor for the displaced.”