When 2012 was coming to a close, you might not have been able to predict what was going to happen in 2013. But you would have been safe if you expected the new year’s events to unravel according to San Francisco Code.

As we near the end of 2013, a lot of events made our city’s headlines and occupied our conversations with friends and neighbors. We learned about one of the biggest sports in the world, and it wasn’t soccer. Aaron Peskin reminded us he hadn’t gone gentle into that good night. NIMBYism made itself known on commercial and residential fronts. Residents of one of the richest cities on the face of the planet started complaining about costs of all kinds. And just when we were ready to slap our heads in disgust, a 5-year-old reminded us how to make magic.

In short, it was a year that highlighted all that is stereotypical and irritating about San Francisco, as well as all that is inspiring, and that makes you proud to call the city by the bay home. Let’s revisit 2013 before we break out the Champagne for 2014.

America’s Cup: One of the oldest competitive sporting events in the world had been underway in various stages for a while already when January 2013 rolled around, but much of the first half of the year was taken up by complaints about how it had underperformed, scandals and on-bay tragedy, and just who would end up footing the bill for the leftover costs. When the finals finally got underway at the end of summer, even some locals who would rather move to Kansas than root for a bunch of billionaires racing ships on the bay found themselves caught up in the drama of the super-fast and super-dangerous boats and the comeback of the century by Oracle’s team. That it all happened on the Marina District’s front door — or front dock — made it all the more interesting.

Cost of living: Even with low inflation, everything costs more these days. But San Franciscans felt a mixture of bewilderment, pride, fear, and greed this year as they watched housing prices reach record levels. People who could afford to buy a house often couldn’t do so, either being outbid by all-cash buyers or simply unable to find anything in the City’s teeny tiny inventory. Rents, too, began to remind us that this is the original gold-rush town. An inaccessible ownership market, combined with $3,500 one-bedroom rentals, plus a spike in Ellis Act evictions finally led some city leaders at the end of the year to attempt to mitigate the pain felt by some in the current bull market. Though housing prices have begun to moderate, they remain at stratospheric levels, making this certain to be an even bigger story in 2014.

8 Washington: Look no further than this Embarcadero project for an example of San Francisco’s odd mix of rich people passing as tribunes of the poor plus referenda run amok plus Aaron Peskin trying to rule from the political grave. In November, the citizens of San Francisco defeated Propositions B & C, measures that would have supported a condo project for rich people on the waterfront that upset other rich people in waterfront condos. The voters dealt a landslide rejection to high-profile supporters of the propositions, including District 2 Supervisor Mark Farrell as well as Mayor Ed Lee and former Mayor Gavin Newsom. Other high-rise condo projects are certain to go up in this hot city still in the midst of a tech gold rush, but they’ll probably be built near less well-heeled opponents.

Marina Green restaurant: The plan by the Recreation and Park Department to put a seafood restaurant in the place of a long-unused Naval building on the Marina Green had neighbors upset at the plan for alcohol-fueled noise near their front yards, Marina residents fearing their neighborhood would become a new Fisherman’s Wharf, local community associations conducting damage control after first getting little feedback and then getting walloped with a ton of feedback from angry neighbors, and city officials trying to distance themselves from what had seemed like such a simple little thing. Again: This isn’t over.

Toasted: Along with real estate sticker shock, San Franciscans found themselves in the national news when Venture Beat’s J. O’Dell complained about being charged $4 for toast at The Mill. O’Dell blames the influx of well-paid tech workers for a situation in which “San Francisco becomes saturated with overpriced crap that is comparable in quality to less overpriced crap.” The self-described Courage Campaign put its courage into action and created a petition urging Mayor Lee to “stop catering to the 1 percent” and stand up for affordability. Yet as “Kenton Kivestu” commented on quibb.com about O’Dell’s manifesto, “This seemed like an article that took 2 random facts ‘Hey, tech is hot right now!’ and ‘This place sells $4 toast’ and wrote a story out of them.” Fair or not, the fact that it resonated so strongly with so many means that either the city will begin to offer affordable housing on a large scale or it will find a way to produce $3 toast.

Pet Food Express loss: A multiyear effort to bring a Pet Food Express and a cat adoption center to a long-empty Lombard location was finally put to rest this year when city planners rejected the company’s request for the second time, despite the endorsement of city planning staff. Local opponents of the project got their way and a storefront remains vacant (though we hear than may be changing — stay tuned). “Of course we will continue to support the animals of San Francisco, but future job and tax dollar growth from new stores will have to wait for a major change in city government.” Pet Food Express co-owner Michael Levy told the Marina Times. “We need more legislators like Supervisor Scott Weiner who truly care about and support this city’s animals.”

Polk Street: A long in-development plan to expand biking on crowded Polk Street ran into the proverbial fan when local businesses and residents worried about the loss of parking on the busy commercial street. City planners adopted a bit of humility and adjusted their plans to address as many concerns as possible, so the project continues to move forward.

Shutdown: Though the federal government’s partial shutdown was a made-in-Washington fiasco, its effects were felt here in San Francisco and the Northside, where even private companies catering to Alcatraz tourists were forced to trim staff when the popular prison attraction was closed. The shutdown overall made people wonder about Washington’s dysfunction and the values that reign there. Then the year righted itself with: 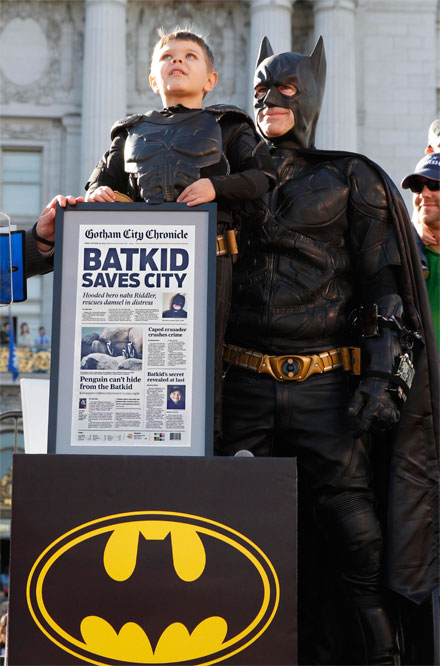 Pint-sized Batman Miles Scott, aka Batkid, brought a grim-faced determination to battling evil in San Francisco and saved the day in more ways than one photo: Make-A-Wish Greater Bay Area/PaulSakuma.com

Batkid: Hardcore conservatives used to put a negative spin on “San Francisco values,” as if everyone in the city was a sex-crazed fiend out to sell drugs and raise taxes or something. Then in November, Miles Scott, a 5-year-old boy who had battled leukemia since he was 18 months old, got to play Batman on the real streets of San Francisco, complete with a call for help from S.F. Police Chief Greg Suhr, a ride in a cool Batmobile, a damsel in distress tied to a fake bomb, an indictment against the Riddler and the Penguin from the federal attorney for this district, a rescue of the Giants’ mascot, the key to the city from Mayor Ed Lee, thanks from President Barack Obama, and the streets lined with thousands of well wishers — including well-paid tech workers, underpaid service employees, government staffers, and all of the other people in the mosaic of this city, demonstrating our real San Francisco values.