A Deeper Look At The Shadow and Doc Savage 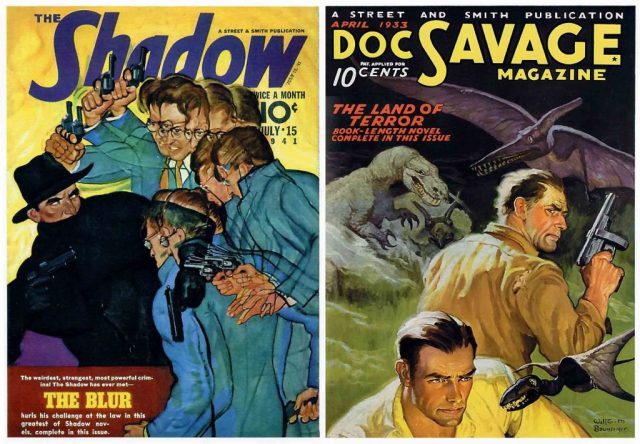 In their latest piece for the Village Voice, R.C. Baker discusses the newest published works of Neil McGinness. His new book, Pulp Power: The Shadow, Doc Savage, and the Art of the Street & Smith Universe, takes a deeper look into the artful creation of The Shadow and Doc Savage, as well as the marketing behind them.

Writes Baker: “‘Walter Gibson believed in hard work,’ notes Neil McGinness in his new book, Pulp Power: The Shadow, Doc Savage, and the Art of the Street & Smith Universe. Indeed, writing under the pen name Maxwell Grant, Gibson cranked out 300 Shadow novels for pulp magazines in just 18 years; in one 10-month stretch, during the 1930s, he banged out 1,440,000 words on his trusty Smith Corona—a feat that resulted in life-size advertising placards of the pulp wordsmith with the tool of his trade being displayed in shop windows all over New York City. McGinness writes that Gibson’s process was ‘similar to a powerful train with his authorial hand on the throttle. Once he had constructed a background, an outline, and a chapter synopsis, his train could leave the station as he then focused on ‘watching the signals flash in sight, so you could stay on the track until the run was finished.’”