A direct attack on women’s rights and safety 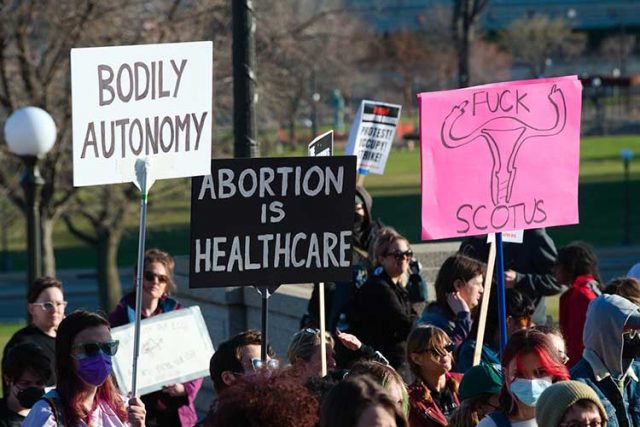 The battles over abortion are shifting into high gear. Photo: flickr.com/fibonacciblue

When, as a sitting senator, Vice President Kamala Harris asked Brett Kavanaugh whether he could think of any laws that specifically governed a man’s body, he couldn’t. He stuttered and stammered. He would later say that he does not have a position on the matter, and he would later lie to the Senate Judiciary Committee and claim that Roe v. Wade was settled law.

Last month, a leaked draft ruling revealed that the Supreme Court of the United States likely has the votes to overturn Roe v. Wade. Nearly 50 years ago, the Supreme Court rightfully recognized a woman’s right to have autonomy over her own body and guaranteed a federal constitutional protection of the right to privacy and access to safe abortion care. Now, right-wing extremists who sit on the highest court in our land are threatening to strip women of their reproductive freedoms.

The physical health and safety of women, and especially minority women, are directly threatened by the overturning of Roe v. Wade.

WOMEN’S HEALTH AND SAFETY ARE AT RISK

It is appalling that the Supreme Court may refuse to protect women’s rights and their health and safety. It’s not shocking, though, given that the antichoice justices were all conservative extremists appointed by presidents who didn’t win the popular vote.

Women’s health and safety is too easily dismissed. Even in San Francisco, our local Planned Parenthood clinic and their patients frequently endure threats and harassment from out-of-town antichoice protesters. In 2020, the local prosecution of domestic violence cases went down by almost 20 percent. Furthermore, 79 percent of survivors seeking emergency shelter were turned away due to lack of space, and San Francisco’s daily newspaper callously dismissed the needs of domestic violence survivors for plainly political reasons. They shamefully did not see fit to endorse Proposition D, which would provide civil legal representation to survivors fleeing their abusers.

As I write this, I hope that Proposition D has already passed to establish the right to civil counsel for domestic violence survivors in San Francisco, but the fact that an initiative to support victims was not embraced by some when it has the potential to help so many women trapped in abusive relationships, is equally appalling and anything but progressive.

While we work to protect victims in San Francisco, I am deeply concerned about what the overturning of Roe v. Wade would mean for the health and safety of women living with abusers across this country. It is common for abuse to escalate when a woman becomes pregnant, and not uncommon for abusers to use pregnancy as a way to hold partners against their will. Pregnancy and then caring for a child creates significant physical, financial, and mental consequences that can make leaving an abusive partner nearly impossible.

If Roe v. Wade is overturned, at a minimum, states will have the ability to regulate abortion access. Abortion will likely be banned in 26 states. We are lucky to live in a state that respects women enough to allow them to make their own reproductive decisions. However, women across the country will not be so fortunate and will need to come here from neighboring states to seek appropriate medical care.

OTHER CIVIL LIBERTIES ARE AT RISk

The leaked Supreme Court ruling puts other civil liberties at risk. Since the 1960s, the Supreme Court has invoked the due process clause of the 14th Amendment to provide us all with a right to privacy. This has led to rulings expanding civil liberties like birth control access, interracial marriage, and same-sex marriage.

Given that nearly two-thirds of Americans support reproductive freedom, the Supreme Court’s willingness to overturn Roe v. Wade is a clear signal that we should expect attacks on other popular civil liberties as well. We must protect the rights our society has fought so long and hard for — and that means electing individuals that represent the will of the people and fighting for the right to choose at every level of government.