A lesson plan for the school board recall

Pay attention when you vote 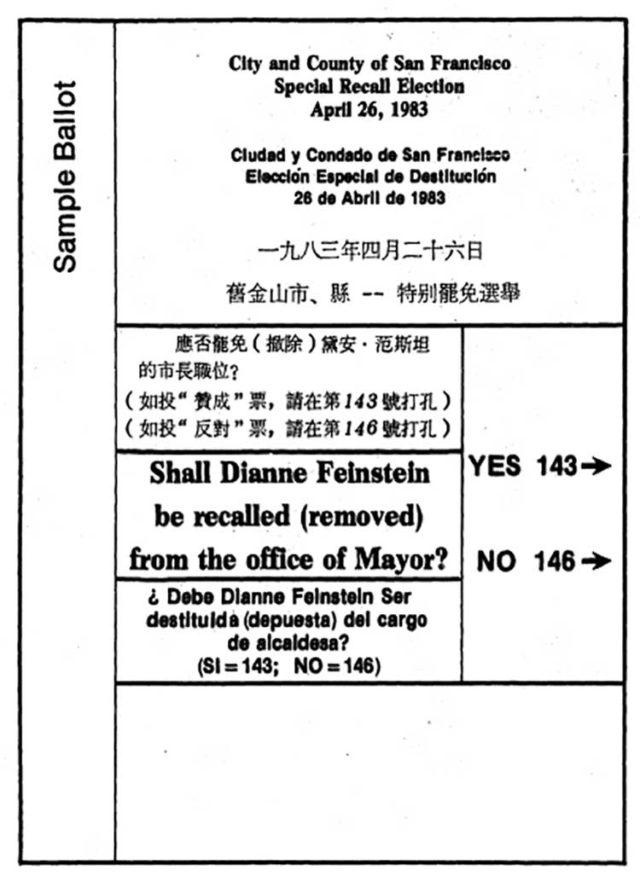 Dianne Feinstein’s political career didn’t seem to be much hindered by a failed recall attempt in 1983. Photo: SFPL/Public Domain
by John Zipperer

School board elections are important, but they’re usually of low interest to the general voter, who probably can’t remember whom they voted for one week later. But when the elected board members go on to perform as controversially as the San Francisco board has in recent years, it provides an education in elections and citizenship for all of us. For that, if for nothing else, we thank them.

The mid-1970s were when I got my first political experiences, and both cases involved schools.

In one case, my family helped Judith Crain in her reelection campaign for the Green Bay school board. We worked out of the Crain home, stapling campaign placards to sticks so they could be used as yard signs. I don’t recall if I also helped deliver the yard signs or if all of us little kids were just shunted off to the kitchen for milk and cookies. The latter is more likely, and it would dovetail nicely with the 1988 Republican National Convention I attended as a member of the press; there, after the day’s work was done, everyone was shunted off to various ballrooms to get drunk. Same principle.

In the second case, I was in fourth grade and it was the 1976 election. That year, when two basically centrist and historically bland candidates vied for the White House, seems an unlikely time to get enthralled with politics, but it did the trick for me and my best friend Jenny. Our key campaign tactic involved making up big cards with pro-Ford slogans on them (I think our strongest argument was “Carter is a peanut,” demonstrating the level of political discourse at Howe Elementary School in 1976).

Both examples highlight the importance and fun of individual involvement in our democracy. In later years, as I have had the opportunity to talk about politics on the radio and on stage, I have often repeated my exhortation to people to pay attention and vote in all elections — not just the ones where they get all hyped up because someone’s trying to overthrow the government or a particular candidate makes you swoon. Elections are about deciding who will legally wield our communal power.

LET’S CALL IT A TEACHING MOMENT

Recall elections don’t automatically mean the incumbents are likely to be dumped; in fact, it’s fairly rare. In Wisconsin’s ill-fated attempt to recall far-right Gov. Scott Walker in 2012, there was a reticence to recall any elected official, combined with some performative overreaching by some activists on the left (yelling at Walker’s elderly mother in a grocery store and targeting his kids on Facebook). Dianne Feinstein easily defeated a recall attempt in 1983 that was pushed by a fringe party. And the recent attempt to recall California Gov. Gavin Newsom only got on the ballot because the pandemic induced a judge to give the signature collectors more time.

But what makes this year’s two recall elections in San Francisco different from those failed recalls is that the performative overreaching activists aren’t on the recall side of the school board fight; they literally are the school board members voters will recall. Also, Gavin Newsom has his woke new-agey side, but he also has his pragmatic small businessman side. We have yet to see a pragmatic side of the city’s district attorney, another candidate who never would have gotten into office if voters had been paying attention. It’s not impossible for someone with his views to get such a position; longtime San Franciscans might remember Richard Hongisto, the local sheriff whose language about crime and structural racism is echoed strongly in Chesa Boudin’s pronouncements. Hongisto served for much of the 1970s before reinventing himself as a supervisor and later a short-lived police chief. So Boudin might have a future in San Francisco politics one day; but if I were a betting man, I’d place my money on his being recalled.

In both cases — the school board and district attorney recalls — voters are paying attention. Certain segments of the population are very engaged. The left-wing activists are of course engaged, but they were already engaged when these candidates first got into office. The incumbents can’t get more of their votes, they can only lose the votes of the nonactivists, and they have done their very best to accomplish that.

It can be hard keeping yourself informed of all of the candidates for every position. My first election in Chicago, I opened up the ballot and saw hundreds of names for God only knows how many different judgeships — positions I didn’t even know would be on the ballot. I didn’t know a single one of them. My bad.

This year, voters are aware of the incumbents. Again, I think it’s a foregone conclusion that they’ll be removed. But voters should bring that level of attention to every election, every year, every office.

With luck (and voter intelligence), the incumbents who are removed from office this year will be replaced by responsible public servants. Judith Crain, by the way, ended up serving on the Green Bay school board for many years, in 1974–81 and again in 1993–02, including as board president from 1997 to 2002. In addition, she has led educational organizations, chaired boards, and even earned a Masters in theology. An all-around impressive public servant, and I wouldn’t hesitate to vote for her or staple yard signs for her today.