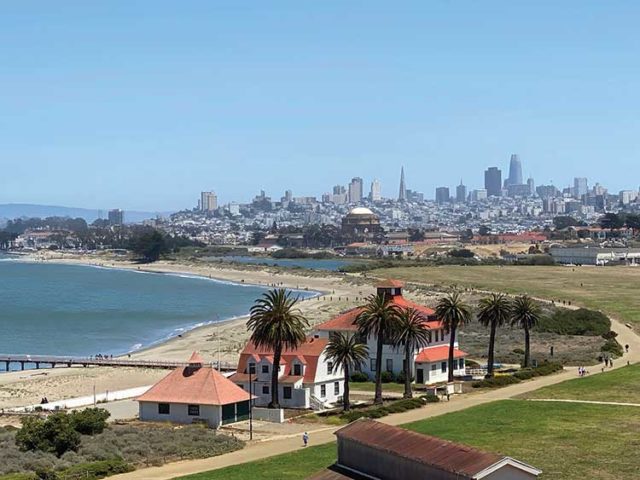 The national housing market appears to be slowing down, according to Michelle Robertson, reporting for SFGate.

She quotes Daryl Fairweather, the chief economist at housing site Redfin, who said, “We’re going from 100 mph to 80 mph. What’s happening right now is a lot of buyers seem to be backing off the market because of how high housing prices have gotten. We’re seeing lower sales and a slight uptick in price drops.”

That’s not entirely the case in San Francisco, according to Eileen Mougeot, senior broker associate with Corcoran Global Living in the city.

“Things aren’t as crazy as they were, but we’re still seeing multiple offers on homes for sale way over the asking price, just not way, way over the asking price,” said Mougeot. “We hear all the time about how everybody’s leaving San Francisco, but if that’s the case, why are we still getting multiple offers? There are always going to be people who want to live in the city.”

Mougeot added that for her office on California Street, the first six months of this year were the best ever, which she believes says a lot about the market, as it covers many areas in all price ranges.

Meanwhile, according to Louis Hansen with bayareanewsgroup.com, homeowner equity in the Bay Area has soared during the Covid-19 pandemic. San Mateo and Santa Clara counties have the highest percentage of equity-rich households in the United States, according to an analysis of mortgages and home values by real estate analytics firm Attom. Equity is the difference between what a homeowner owes on a house and what a house is worth.

More than seven in 10 homeowners in the two counties have more than 50 percent equity in their properties, a substantial rise in personal wealth even as high unemployment and economic suffering continues in other parts of the community.

All Bay Area counties except San Francisco saw gains in households reaching an equity-rich threshold between March 2020 and June 2021. Contra Costa, once seen as a more affordable suburban community, had the biggest jump, from 43 percent to 57 percent. Alameda grew from 58 percent to 66 percent, Santa Clara 66 percent to 70 percent, Marin 52 percent to 64 percent, and San Mateo 72 percent to 74 percent. All of this is because property values have gone up so much in the last year.

All but one of the 183 metropolitan housing markets tracked by the National Association of Realtors (NAR) posted annual price increases in the second quarter of 2021. Twelve of those areas had appreciation that exceeded 30 percent, according to Jann Swanson with mortgagenewsdaily.com.

However, Lawrence Yun, NAR chief economist, does not expect this kind of appreciation to continue. He said, “Home price gains and the accompanying housing wealth accumulation have been spectacular over the past year, but are unlikely to be repeated in 2022.”

Yun added that “there are signs of more supply reaching the market and some tapering of demand. The housing market looks to move from ‘super-hot’ to ‘warm’ with markedly slower price gains.”

In an opinion piece published by The Guardian, David Sirota and Julia Rock wrote that as the climate changes, census data shows Americans are, ironically, shifting from safer areas of the United States to the regions most at risk of extreme heat and flooding.

The Census Bureau’s new map of the last decade’s population trends shows big growth in the West and on the coasts — and declines in the inland East Coast and Great Lakes region.

Miami, for example, had a 10 percent population increase despite the possibility that large swaths of the city could soon be underwater. Compare that to a place like Vermont, where the population growth was flat.

San Francisco residents have enjoyed a relatively mild summer, with fog protecting the city from the excessive heat felt elsewhere in the country. In recent weeks, however, Covid-19 has surged again across the nation and even in the city.

Mougeot is a bit concerned about how the coronavirus might again lead to restrictions on open homes, and more important, on broker tours — weekly events where agents visit as many as 30 or 40 homes all in one day, to see what has just come on the market. According to Mougeot, these tours are invaluable, providing agents with a boots-on-the-ground grasp of what is available, and how the market is trending.

Fortunately, as of right now, there is no indication that these restrictions are about to be imposed. Knock on wood.