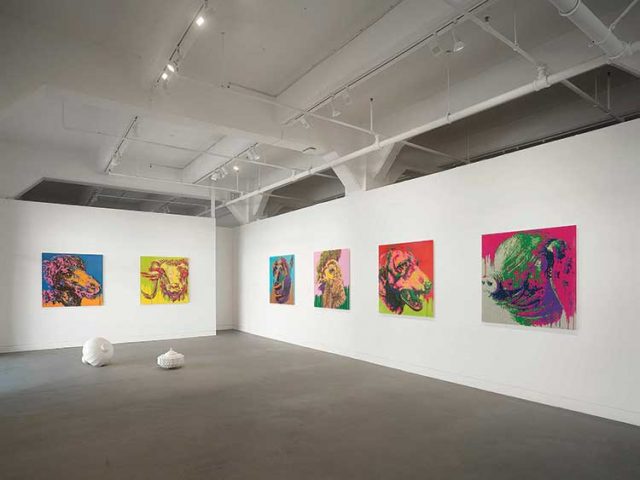 Ai Weiwei’s sociopolitical inspired art is on view at the Haines Fort Mason Gallery through Aug. 27. “Everyday Monuments” is Ai’s first exhibition in San Francisco since 2016, and it shines a light on people, places, and events that might otherwise be forgotten. The exhibition consists of 18 works in materials such as Legos, marble, and wood, each a synthesis of complex historical, cultural, and political references.

Ai was born in China in 1957. As an outspoken champion of human rights, his cultural criticism and activism have made him a natural target for Chinese authorities who attempt to censor the artist and his output. Not to be discouraged, Ai continues to turn activism and adversity into art.

This exhibition marks the San Francisco debut of Ai’s Zodiac (2018). Twelve panels made of thousands of brightly hued Lego bricks depict the mythical animals of the traditional Chinese Zodiac, a system ascribing personality traits to birth years. Appearing in the gallery in astrological order, the body of work is inspired by the Zodiac Fountain in Yuanmingyuan, Beijing’s Old Summer Palace. This epic water clock consisting of 12 monumental bronze animal heads was looted by Anglo-French troops who took part in the destruction of Yuanmingyuan in 1860 during the Second Opium War.

Reclamation of cultural relics from the colonial past is an ongoing global talking point in the art world, and occasionally these bronze heads resurface in the marketplace. Though they have appeared for sale — most famously at Christie’s 2009 auction of the Yves Saint Laurent and Pierre Berge Collection — only seven of the Zodiac heads have been recovered to date. Presenting the Chinese Zodiac using a children’s toy, Ai’s zodiac heads in Lego recreate monuments out of everyday materials and, because of their shape, the artworks are reminiscent of the geometry of computerized images consisting of pixels.

Rebar (2014) casts everyday objects in marble, creating a memorial. Rebar emerged from the aftermath of a massive earthquake that struck Sichuan Province on May 12, 2008, killing nearly 90,000 people, among them thousands of school children. The children’s deaths were caused, in part, by faulty school construction. Bereaved parents, outraged by the needless deaths of their children, were met with swift retribution and were silenced by Chinese authorities.

Ai worked with other activists to investigate the cover-up by the Chinese government. His work yielded the names and details of 5,335 schoolchildren who had perished in the earthquake and whose identities had disappeared from the public record. Each twisted rod of carved marble is placed on top of wooden frames shaped like tiny coffins as monuments to lives lost.

After a massive public outcry for his freedom, Ai was released in the summer of 2011 after a 81-day imprisonment. He was brutally beaten by police and disappeared into custody for his human rights activism, although the official reason was “economic crimes.” Subsequently, Ai was freed, but his passport was confiscated and he was surveilled by video cameras, which once surrounded his Beijing studio. The Lantern (2014) is Ai’s mocking response to the video cameras, which he decorated with red paper lanterns associated with festivals. Beautifully carved in marble, they exist as an ornamental testament to what the artist endured.

Ceiling Lamp with Stars (2014) is a reproduction of a light fixture commonly found in Communist China during the 1950s and 1960s. The marble sculpture is covered in five pointed stars, a symbol of the Communist party, and speaks to the bygone age of Soviet-inspired design.

Ai’s activities postimprisonment continue to spark meaningful dialogue as his observations about justice continue to reach wider audiences. After his passport was returned in 2015, Ai has lived in Berlin, Cambridge, and now resides in Portugal.

Ai Weiwei presents art as an opportunity to deconstruct the values of society and encourages his viewers to do one small thing every day to prove the existence of justice. The role of the individual is a role of power. Ai explains: “I call on people to be ‘obsessed citizens’, forever questioning and asking for accountability. That’s the only chance we have today of a healthy and happy life.”