‘Andy Warhol From A to B and Back Again’

From May 19 through Sept. 2, 2019, the SFMOMA will present the first retrospective of the work of Andy Warhol in 25 years. The critically acclaimed exhibition is an exclusive West Coast presentation and features more than 300 works spanning three floors of the museum.

Warhol wasn’t widely considered a relevant artist at the time of his death in 1987. Having saturated the world of commercial art, fine art, film, print media, theater, photography, and even music, it wasn’t until his 1989 retrospective that the public fully understood he was a force to be reckoned with.

Warhol absorbed the values of the culture and presented them back to the public through his art. In this sense, he was a mirror that somehow managed to change people, places, and events that were already iconic into something even bigger through his repurposed imagery. An early purveyor of the Pop Art movement, Warhol kept much of himself out of his paintings. The exhibition’s title, “From A to B and Back Again,” comes from a book “written” by Warhol that consisted of transcripts from telephone calls between himself and his colleagues like Brigid Polk and Bob Colacello. This created a distance from the book’s subject, and a “who said what” ambiguity in the narrative. The Warhol of the book is, as a result, a collection of ideas and conversations instead of a personal account from its author.

FROM SHOES TO BRILLO BOXES

The exhibition begins with two galleries of works on paper. This period includes some early drawings from the 1940s as well as Warhol’s commercial illustrations created for advertising in the 1950s. This includes collages and sketches of shoes for the Miller Shoe Company and illustrations for Glamour magazine and The New York Times.

This early art laid the groundwork for Warhol’s focus on objects, consumerism, and the mass production of repeated motifs. Special exhibition galleries take the visitor chronologically through Warhol’s career. His best-known paintings from 1960 through 1968 can be found here with groundbreaking iconic paintings like Green Coca-Cola Bottles (1962), 192 One Dollar Bills (1962), and the sculpture Brillo Boxes (1969, version of the 1964 original.) The exhibition shifts to depictions of celebrities, including Elvis, Elizabeth Taylor, and Jacqueline Kennedy. A black box gallery will screen samples of Warhol’s films and videos including his Screen Tests featuring Ethel Scull, Edie Sedgwick, and Billy Name (1964–65).

Gary Garrels, Elise S. Haas senior curator of painting and sculpture at SFMOMA said, “His inner emotions, his psychic self were not his subject matter. Warhol is constantly labeled a Pop artist, but all that happened within a couple of years and then he moved on and the work goes quite dark and explores questions of gender and sexual identity, fame, subcultures.” Warhol’s painting subjects turned dark in the Death and Disaster series,  which memorializes everything from electric chairs to car crashes to botulism-contaminated tuna fish. 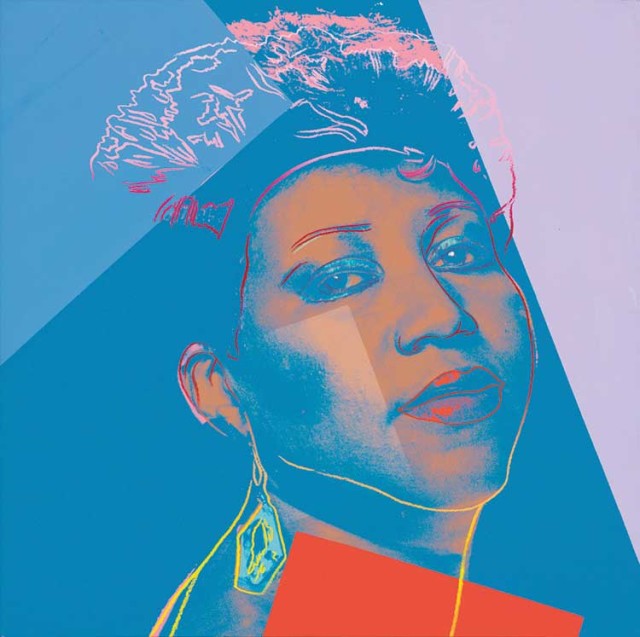 Bold, immersive experiences await in the gallery decorated with 16 color-saturated Flower paintings (1964) which will be installed on top of Warhol’s fanciful Cow Wallpaper (1966). This playful feeling continues in Silver Clouds, an installation of shiny Mylar balloons created in 1966, a point in time where Warhol declared himself to be done with painting. This marked the beginning of activities in Warhol’s Factory including his management of the legendary rock band The Velvet Underground as well as filming and recording the happenings of the characters moving in an out of his work spaces in the Factory. Indeed, Warhol announced his “retirement” from painting to pursue film making full time. His films, including Empire (1964) and The Chelsea Girls (1966), remain some of the most influential underground films of the sixties era.

After a near-fatal assassination attempt in 1968, Warhol’s Factory became more businesslike and less available to the outside world. Perhaps his best-known work in the seventies centered around Warhol’s large-scale silk-screened portraits of celebrities, cultural icons, gallerists, athletes, and business leaders. Nearly 40 silk-screened portraits will be on display, including Holston (1975), Dominique de Menial (1969), Liza Minnelli (1978), and Gianni Versace (1979–80) as well as a portrait of the artist’s mother, Julia Warhol (1974). These portraits became immediate status symbols for the subjects portrayed, and in many ways enhanced their celebrity status.

The 1970s and 1980s represents Warhol’s Post-Pop artwork, a lesser-known era that included somber gold abstract patches of dark and light in the Shadow paintings (1978), and two large-scale Rorschach paintings (1984). Another rarity on display is an unpacked personal time capsule, one of 610 created over the course of the artist’s life.

Warhol’s visual influence can be seen everywhere. His carefully crafted persona is an early example of branding long before the 21st century when reality television and social media have given everyone a public identity. Andy Warhol remains a ubiquitous presence in our culture, and “From A to B and Back Again,” showcases not only an artist but also an ongoing chapter in American history.