Williams in 1979. The photo was used for the March 12, 1979 cover of Time magazine. It was installed in the National Portrait Gallery to commemorate Williams after his death. photo: Michael Dressler / wikimedia commons
by Michael Snyder

His untimely departure, perhaps to dimensions unknown, was devastating to countless fans and admirers, but no one feels the recent painful loss of the protean actor and comedian Robin Williams more acutely than those of us who live in the San Francisco Bay Area.

Robin was a very funny man, a fine actor, and a humanitarian. He was the pride of San Francisco, his adopted home, the place where he got his start in comedy and where he continued to live after achieving worldwide fame and acclaim in films and on television. For all of his talent, the one thing that his friends and colleagues have emphasized in the wake of his passing was his genial nature. He was, by all evidence, a sweet, kindhearted guy who found joy in making people happy, a quality that seemed to suffuse every fiber of his being. And the easiest and most immediate way he could see the fruits of his labors was up close and personal in a comedy club — even a tiny closet of a joint like the now-defunct Holy City Zoo in the Richmond District.

A dropout from the drama program at the prestigious Juilliard School, he first rattled cages as a stand-up comic at the Zoo and other local establishments in the mid-1970s. His gifts as a comedian were instantly evident: a lightning wit, an omnivorous topicality, a gift for impressions, and an inherently lovable essence and vulnerability that were palpable, no matter how scathing the jokes and routines or how brutally he skewered his targets — usually the pompous, the nasty, and the humorless. Those skills of his remained vital through decades of live sets at clubs, theaters and arenas; comedy albums; TV specials; late-night talk-show guest shots; USO tours; and charity events like his annual co-hosted Comic Relief benefits. He was electrifying, riotous, and relevant all the way into the 21st century. 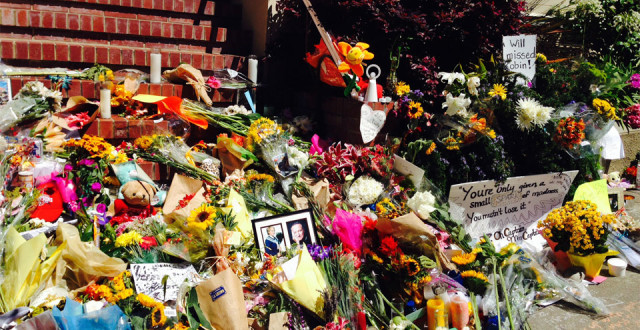 Hundreds of flowers left in memorial to Robin Williams at the steps of the San Fransicso house used for Mrs. Doubtfire. photo: lynette majer

After a few years of dazzling audiences in San Francisco clubs and at high-profile establishments like the entertainment-industry showcase the Comedy Store in Los Angeles, Robin became a TV star. Mork — his endearingly goofy alien character from the situation comedy Mork & Mindy — made him a household name and turned “Nanu-nanu!” and “Shazbot!” into inescapable catch phrases that were cheerfully parroted back at him by delighted strangers for much of his career. He seemed to take it all in stride, genuinely embracing the love that poured in his direction.

While he was still Mork-ing it up, he caught the attention of the movie studios and the renowned Oscar-caliber director Robert Altman, who cast Robin as the title character in Popeye, the good-natured but tepidly received live-action interpretation of the classic comic strip about the squinting, heroic, spinach-eating sailor. Robin was undaunted by the less than ecstatic reaction to Popeye, and subsequently embraced his first truly serious film role as the conflicted, ill-fated lead in the 1982 adaptation of the tragicomic John Irving novel The World According to Garp. And when he showed uncommon depth and grace in that part, it was a revelation. The manic television clown had become a respectable and respected movie actor.

From that point on, Robin began to build a broad, impressive, and admittedly checkered filmography. Early high points ranged from his warm, earthy Russian immigrant in Moscow on the Hudson to the manic real-life Armed Forces radio D.J. Adrian Cronauer he brought to theaters in Good Morning, Vietnam. The latter, which gave Robin a chance to flagrantly exercise his comic skills in a wartime setting with all the drama that entailed, brought him a 1987 Academy Award nomination for best lead actor — the first of four such acknowledgements. He would follow that with a best actor nomination for playing an inspiring, unorthodox English teacher in 1989’s Dead Poets Society, and another best actor nod for his moving embodiment of a disturbed homeless man in 1991’s The Fisher King, finally winning a best supporting actor Oscar as a dedicated psychotherapist in 1997’s Good Will Hunting.

He made his share of less than stellar movies, particularly those comedies that went for cheap laughs like Club Paradise, and those dramas that went for cheap sentiment like Patch Adams. The visually stunning and heartfelt What Dreams May Come may have succumbed to treacle, but Robin himself was never less than earnest and committed to whatever role he undertook. And he worked with some major cinema auteurs, including the aforementioned Altman; Terry Gilliam who directed him in The Fisher King; and Woody Allen who cast him in Deconstructing Harry as an actor perpetually out of focus — a part that required someone of Robin’s larger-than-life presence to have an impact beyond the blur.

If he was given comedic and emotional latitude in a jubilant and life-affirming project that didn’t aim for the lowest common denominator, he was at his populist best. Thus, he nailed it with family-friendly comedy Mrs. Doubtfire that featured him as a beleaguered husband trying to keep his family together by impersonating an elderly female Scottish housekeeper, and the creative and whimsical all-ages action fantasy Jumanji, where he was the grown-up Alan who was ensnared by a mystical board game when he was a kid and trapped inside it for 26 years. His hilarious, rapid-fire voice work as the garrulous, pop-culture-infused Genie in Disney’s animated Aladdin was a tour de farce probably unmatched by anyone before or since.

He eventually accumulated over 100 acting credits on the big and little screens, and did some of his best work in recent times — as the unhinged photo technician in One Hour Photo, the cunning crime writer in Insomnia, and the frustrated novelist/single father in World’s Greatest Dad.

Ultimately, the guy won every significant American entertainment award out there other than the Tony: one Oscar, two Emmys, four Golden Globes, two Screen Actors Guild Awards, and five Grammys. Tony aside, he garnered favorable notices when he co-starred with his pal Steve Martin at Lincoln Center in a production of Waiting for Godot in 1988. Not too shabby.

His return to the TV sitcom format with the 2013 series The Crazy Ones didn’t last beyond a single season, and he clearly had serious emotional and physical issues that plagued him. Yet the sense that Robin had so much more to give audiences only increased the widespread sadness at his death. Though he remained popular enough to sell out a concert hall, he still relished dropping into clubs unannounced and flexing his prodigious talent for hours — even when his comedy peers outnumbered the paying customers.

Yes, his work and memory will live on. It’s nowhere near enough to make up for what has vanished from our lives. The only consolation beyond our continuing pleasure at his talent as it survives on various platforms is that this whirlwind, this treasure, this genius is now at peace.

Tweet
Send to a Friend Print
Michael Snyder is a print and broadcast journalist who covers pop culture on KPFK/Pacifica Radio's David Feldman Show and Thom Hartmann Show and on Michael Snyder's Culture Blast, available online at GABroadcaster.com and YouTube. You can follow Michael on Twitter: @cultureblaster