The Contemporary Jewish Museum will present the first major museum survey of the work of Northern California sculptor Annabeth Rosen. A pioneer in the field of contemporary ceramics, Rosen’s survey covers over 20 years of her works. Exhibited for the first time on the West Coast, “Annabeth Rosen: Fired, Broken, Gathered, Heaped” includes sculptures that range from the diminutive to the monumental as well as large works on paper that mirror her explorations in ceramics.

Rosen was formally trained in ceramics, yet is influenced by paint resulting in conceptually driven sculptural forms that push the medium into new directions beyond spectacle. Raised in working-class Brooklyn, Rosen was taught to be resourceful and often uses repurposed pieces from broken ceramics. Like the Japanese approach known as Kintsugi, breaks and repairs are treated as a part of a broader history of objects, and the resulting damage, repair, and repurposed fragment is considered beautiful because of its flaws. Process and chance are equal elements in the formation of her art objects. “I break almost as much ceramics as I make,” Rosen says, “and I think I learn as much about the work by doing so. By being so focused on a destination for the piece, I overlook shapes and ideas. Much of the work is made by already fired parts broken, reassembled, re-glazed, and re-fired with the addition of wet clay elements if necessary.” 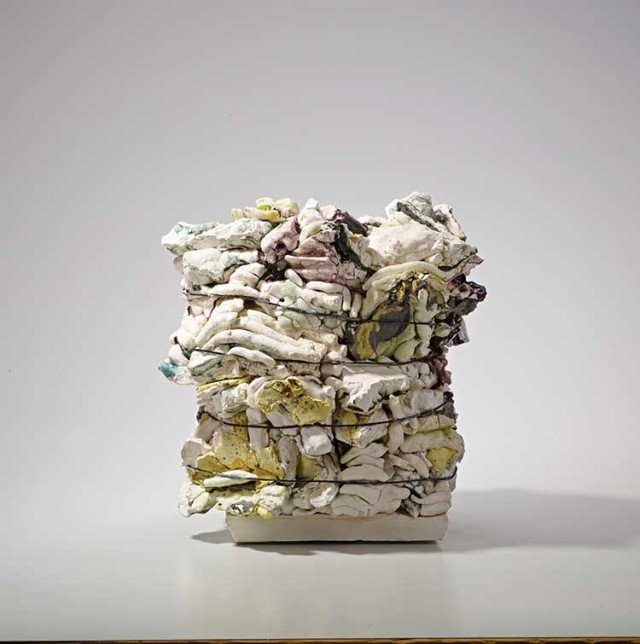 Rosen’s ceramic sculptures are whimsical, biomorphic explorations reminiscent of Surrealist paintings by Paul Klee or Yves Tanguy. Untitled #100 Twig consists of a series of striped, tube-like shapes pushing out in all directions like a creature found at the bottom of the sea. Talley, crafted from glazed and fired ceramic, steel bailing wire on a steel stand on coasters, takes the biomorphic to a whimsical extreme with large, brightly colored shapes that seem to shift and drip as if they were fluid instead of solid objects. Black and white two-dimensional studies complement the ceramics in pieces like Tube II, made from acrylic paint, ink, and gouache on paper. The presentation of Rosen’s works on paper alongside the ceramic pieces imitates the immersive experience of entering the artist’s studio.

The earliest works in the exhibition date from the mid-1990s and include a series of plate- and tile-based sculptural objects that take inspiration from the natural world. When Rosen moved to Davis, Calif., she became the Robert Arneson Endowed Chair in the Department of Art and Art History at the University of California, Davis. These works imagine dense ecosystems of flowering plants, birds, and small microcosms in varying states of decay. Stacked in layers, they recreate the strata of the earth.

Between 2005 and 2015, Rosen began to create her large-scale “mash up” works. Using unlikely elements like steel bailing wire, tubes, organ-like blobs and voluptuous gourd shapes in precarious gravity-defying assemblages, she turned away from the traditional support of the pedestal and replaced it with the more functional and nontraditional rolling metal cart. The artist began honing in on the delicate, unsettled relationship of improvised construction. 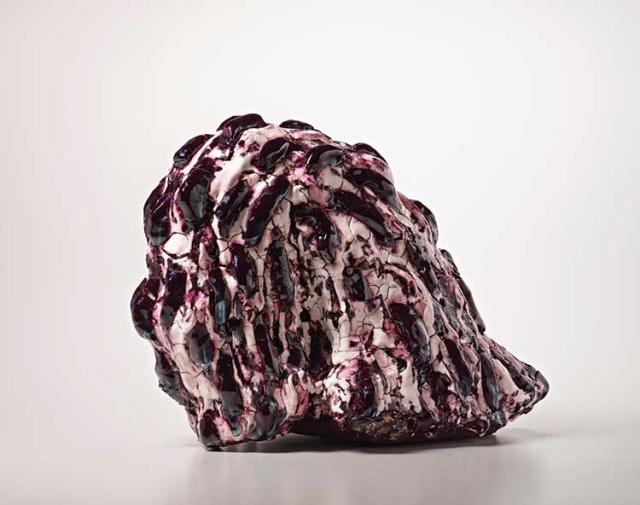 “Annabeth Rosen, an important Northern California Jewish artist, has been working prolifically for decades to redefine the genre and boundaries of contemporary ceramic practice,” says Lori Starr, executive director of the CJM. “We are exceptionally pleased to offer audiences in the Bay Area — a region known for its innovation in the medium of ceramics — this opportunity to discover the work of one of the most important contemporary artists working in clay today. On the heels of her prestigious Guggenheim fellowship, the timing to celebrate Rosen’s work could not be better.”

A significant monograph published by Lucia Marquand and organized by Contemporary Arts Museum Houston accompanies the exhibition. The publication includes an introduction and essay by organizing curator Valerie Cassel Oliver, as well as contributions by Nancy Princenthal and Jenni Sorkin. The monograph also features color images of the artist’s works and a chronology of the artist’s life and work. Annabeth Rosen’s works are in the collection of the Los Angeles County Museum of Art, Oakland Museum of California, and the Denver Art Museum. She has received multiple grants and awards, including a Pew Fellowship and two National Endowments.