The Asian Art Museum’s exhibition Divine Bodies (March 9–July 29) will feature Buddhist and Hindu figurative sculpture from 1,500 years ago. Seventy large-scale historical sculptures and paintings will be on display, including contemporary photo-based work.

The deities in human form — goddesses, gods, Buddhas, and bodhisattvas — are meant to inspire introspection and connection to the human condition and its connection to the divine. Through history, these statues encourage devotees to look at devotional images that then turn thoughts inward, reminding each person of one’s own spiritual path to enlightenment. 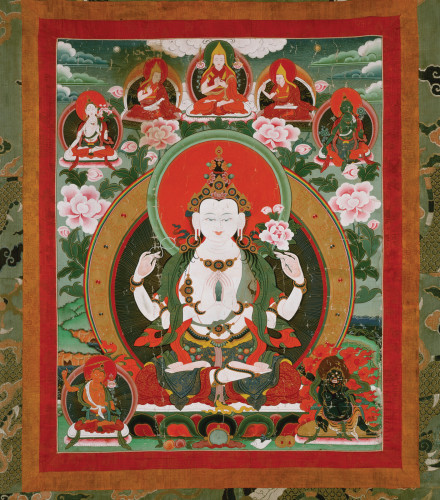 Avalokiteshvara, or the bodhisattva of compassion, is represented in traditional Tibetan colors on cotton from 1800–1900. The Cosmic Buddha from China’s Tang dynasty is a limestone sculpture dating from 618–907. Head of a Buddha, carved in greenish stone from Pakistan dating from 300–500, shows the deity with eyes closed in serene meditation and appears as though it could be from the Art Nouveau era, circa the 1890s. Themes of transformation and transcendence take on frightening forms in Vajrabhairava, a wrathful Buddhist deity, wild eyed, open mouthed and with many arms, rendered in bronze with gilding from Tibet, circa 1700–1800. The Esoteric Buddhist king of passion Ragaraja transforms worldly lust into spiritual awakening. Scowling eyes made of crystal look out from this painted wooden sculpture from Japan’s Edo period, circa 1615–1868.

Beyond traditional representations of the sacred, Divine Bodies includes four photo series from contemporary Indian photographers Gauri Gill, Dayanita Singh, Pamela Singh, and Vivian Sundaram as well as video work from the American-Korean duo David and Hi-Jin Hodge. This extensive presentation of photography addresses an issue central to the exhibition:  How can we discover meaning in an ever-changing, impermanent world?

Photographer Dayanita Singh presents the life of a eunuch named Mona in Delhi’s hijra community. As someone born male and self-identified as female, hijra are considered a third sex in India and are simultaneously shunned and considered close to the divine because they, like many Hindu deities, possess both male and female forces. Karin G. Oen, assistant curator of Contemporary art, reflects “… [L]ike a religious experience, Mona’s difficult life offers us a glimpse of transcendence within self-transformation, a parable for what happens when we embrace what lies beyond the material world as it is given to us.”

Tweet
Send to a Friend Print
Sharon Anderson is an artist and a writer in Southern California. She can be reached at mindtheimage.com.