The Asian Art Museum, in its latest exhibition, “Awaken: A Tibetan Buddhist Journey toward Enlightenment” invites the public to open their eyes, wake up, and see the art of Tibetan Buddhism from the perspective of a practitioner, or someone seeking enlightenment through meditation. One of the pieces on view is a painting of The Mandala of the Buddhist deity Vajrabhairava, who is represented with a multitude of arms, legs and faces contorted in vengeful expressions. Each hand carries objects representing aspects of spiritual knowledge, tools wielded to destroy obstacles that block the way to wisdom. Beneath his feet, he tramples figures representing delusional attachments. In this dyed tapestry on cotton, the deity is the conqueror of death. Buddhas have the quality of terminating death and the cycle of rebirth, or samsara. Vajrabhairava represents that goal of the journey to enlightenment or awakening.

BUDDHISM AS A VISUAL PHILOSOPHY

In Buddhist philosophy, one of the four noble truths is the truth of human suffering. During our daily lives, the cycles of the sleeping, dreaming, and waking states create repeating patterns, and meaning can easily be misplaced or lost completely, which can become a source of suffering. Tibetan Buddhist art acts as a visual aid to meditation and enlightenment, as a way out. At the end of the journey, or the center of the mandala, we see the cosmos as a whole. Visual art is the catalyst toward this transformation along with the realization that the world is not as it appears on the surface — fragmented and chaotic — but is instead fundamentally interconnected.

In this presentation, the museumgoer is a viewer and a participant in the quest for higher knowledge. As Dr. Jay Xu, Asian Art Museum director and CEO, states, “Presenting the art through a ‘questing’ narrative that invites audiences to be both viewer and participant reflects the goals of the Asian Art Museum’s ongoing transformation of the visitor experience:  the absolute necessity of deep engagement with art — an engagement that’s the heart and soul of Tibetan Buddhism.”

A JOURNEY BACK TO THE BEGINNING

The audience travels through a series of galleries with close to 100 striking objects that chart the path from birth to death, journeying through the clamor of daily life to the quietude of enlightenment. First, “Awaken” begins with art that speaks to the unbalanced nature of our contemporary world. The exhibition begins with a modern-day video meant to disarm the viewer and as a reminder to not be lulled to sleep, but to awaken our senses to the true nature of reality. Once in this state of mind, the visitors learn some of Buddhism’s essential teachings, the geography of monastic life along with the tools and weapons meant to aid the meditative process, including a spectacular flaming skull trident from 18th-century Tibet, a weapon that symbolizes triumph over ignorance. 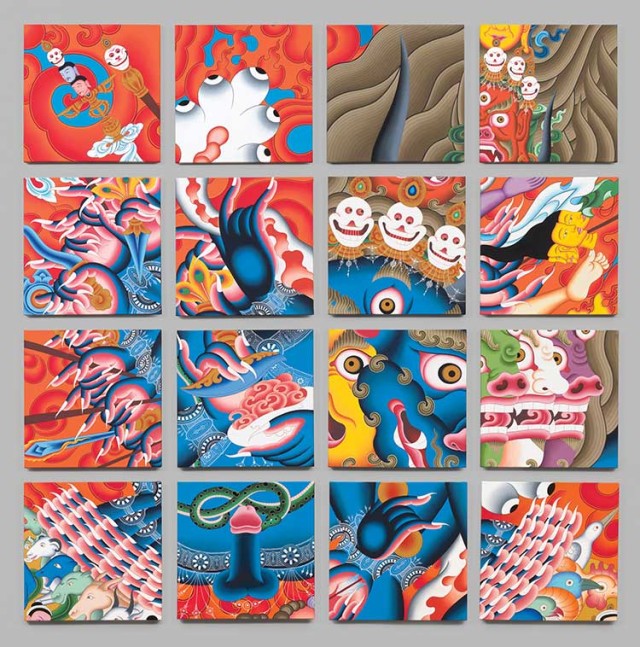 Artists in the Tibetan tradition strive to symbolize the wordless, nameless states of mind in multiple cosmic dimensions to aid in the quest to move beyond death and rebirth. In the center of the exhibition we once again meet Vajrabhairava, Destroyer of Death, and finally a serene 12th-century crowned Buddha, a visual metaphor for enlightenment, the state beyond death and rebirth.

Beyond major historic works, “Awaken” also features three wildly colorful contemporary paintings by Tsherin Sherpa. He was trained in traditional Tibetan thangka painting with his father, Urgen Dorje, a renowned thangka artist from Ngyalam, Tibet. Sherpa is known for his visually stunning ability to split, melt, and alter large-scale neotraditional paintings, and in doing so he effectively expresses to the viewer the complex mental tactics that Tibetan Buddhism deploys to sharpen the mind and focus the attention of the adherents.

“A Tibetan Buddhist initiate’s journey toward enhanced awareness is, in part, facilitated through visualizations — and such visualizations always require artistic models,” explains Dr. Jeffrey Durham, associate curator of Himalayan Art and the exhibition’s co-curator. “The landscapes of Himalayan Buddhism, along with the powerful entities that populate them, make for a dramatic visual repertoire unrivaled in the world of religious art, allowing the exhibition journey to culminate with a powerful moment of visual and spiritual clarity made manifest by a blend of art and experience.” Durham continues, “Understood this way, the eye-popping color and mesmerizing, intricate detail of these artworks becomes an invitation to look closer and closer — and ultimately address the universal human quest to be fully present in the moment.”

Sharon Anderson is an artist and a writer in Southern California. She can be reached at mindtheimage.com.