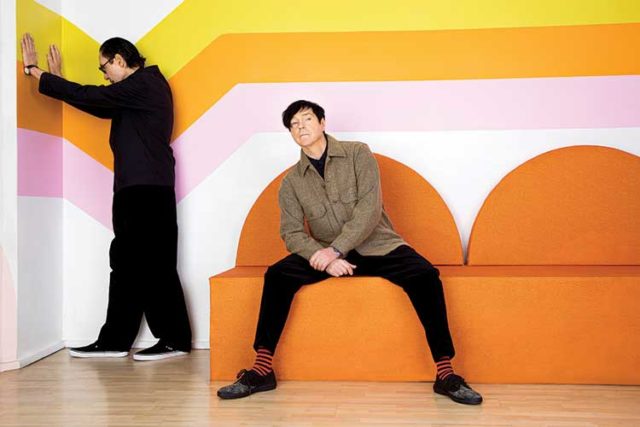 The Sparks are back — in music and on screen. Photo: Anna Webber
by Michael Snyder

They may not be superstars, and you may not have even heard of them, but Sparks is a remarkably durable and mutable musical act comprised of brothers Ron and Russell Mael — two prodigiously inventive and delightfully eccentric Los Angeles natives — and whomsoever they choose to play in their ensemble. They’ve been at it for over five decades and show no sign of stopping. In fact, A Steady Drip, Drip, Drip, their 24th studio album, was released last year to favorable reviews. And they just issued a hypnotic new track, “Your Fandango,” in collaboration with an old ally: singer, songwriter, producer, and recent Rock and Roll Hall of Fame inductee Todd Rundgren.

Perhaps you’d recognize the Maels in a photo or on the cover of an album. They’re unmistakable. Singer Russell has frequently sported a curly ’do and glam duds that befit his androgynous air and frontman status. Keyboardist and chief Sparks composer Ron’s image has been one of slicked-back hair and vintage businessman’s attire with a severe demeanor enhanced by a moustache that evolved from a provocative Chaplin/Hitler-type lip brush to a less controversial pencil-thin one.

Regardless of their popularity ebbing and flowing over time, they’re now the subject of a detailed documentary, The Sparks Brothers, scheduled for theatrical release on June 18. There are copious interviews with the brothers and some of their famous fans (e.g., Beck, Patton Oswalt, members of the Go-Go’s, Depeche Mode, Erasure, Sex Pistols, Franz Ferdinand, and Visage), archival studio and performance footage, and whimsical animation to illustrate the breadth and longevity of the Maels’ career. The Sparks Brothers was directed by Edgar Wright — the distinctively droll British filmmaker who made Baby Driver, Shaun of the Dead, and Scott Pilgrim vs. the World.

And Sparks will be on the big screen in another project this year. Annette, a feature film directed by France’s Leos Carax with screenplay and music by Ron and Russell, will have its premiere on July 6 as the opening-night offering at the 2021 Cannes Film Festival. The movie stars Adam Driver and Marion Cotillard as a stand-up comedian and an internationally renowned opera singer who fall in love, marry, and find their lives changed by the birth of their daughter, whom they name Annette.

The Maels started making music in the late 1960s, they’re still at it, and remain as unique and vital as they’ve been since they began. They have a loyal following, and their influence has been profound on a number of renowned musicians, such as those who provided testimonials for The Sparks Brothers, despite stylistic jumps that literally put them all over the map with legitimate hit records in England, France, and Germany over the course of their career.

Like many who would pursue acclaim in pop music, they were a couple of middle-class kids who wanted to be in a band. The group they formed with like-minded pals, first dubbed Halfnelson, managed to score a recording contract and a name producer, the aforementioned Todd Rundgren. The Halfnelson debut album was released in 1971 to little fanfare or success. Shortly thereafter, the record label demanded a name change for easier marketing purposes. After some minor squabbling, they settled on Sparks. Their music was influenced by British Invasion rock and the sound of the hits they listened to on Los Angeles radio while growing up, but their lyrics, even then, were infused with self-deprecating wit and an off-kilter world view that would be their trademark to this day.

It was the third Sparks album, Kimono My House, which gave them their first taste of success and a considerable audience in Europe. “This Town Ain’t Big Enough for the Both of Us,” the confrontational glam-rock call-to-arms that served as the debut single from the record, reached the top 10 in the Netherlands and Switzerland and hit number two on the British charts. Even then, Sparks was eager to apply a variety of styles to their sound: hard-edged rock, progressive chamber pop, Tin Pan Alley crooning, and cabaret-ready torch songs. From album to album, they’d change it up to the shock or delight — or both — of listeners.

For their eighth album, they were ready to toss a massive curve ball at their audience. They made that record, No. 1 in Heaven, with Italian producer Giorgio Moroder, whose electronic-pulsed disco hit “I Feel Love” was rhythm-and-blues diva Donna Summer’s big breakthrough. As if a rebuke to their previous records, Sparks and Moroder fashioned No. 1 in Heaven into a crucial piece of early techno-pop that influenced the dance-club-ready sounds forged by a generation of synth-rockers. But over the next few albums, the Maels gathered together a new band to reinvent themselves as new wavers. Alternative rock stations and the newly forged MTV gave hit status to Sparks’s jubilant nightlife anthem “Cool Places,” sung by Russell as a duet with the Go-Go’s Jane Wiedlin. Sparks would presage EDM, then eventually embrace it with the tongue-in-cheeky “Music That You Can Dance To.” And so it went for the Maels, with a hit song in Europe every few years and a devoted cult following in the United States.

By the mid-2000s, some of Ron’s compositions, such as the dreamlike “My Baby’s Taking Me Home,” began to reflect the minimalism of neo-classicists Steve Reich and Philip Glass. Musical genres aside, the subject matter of their ever-witty lyrics has seemed limitless. Topics have included the lifestyles of the rich and feckless (“Something for the Girl with Everything”), doom-saying prognosticators (“I Predict”), the pressures of daily life (“Beat the Clock”), crippling anxiety (“Angst in My Pants”), the afterlife (“Here in Heaven”), self-loathing (“I Wish I Looked a Little Better”), the price of love (“When I’m with You”), carnal pursuits in various places (“Singing in the Shower”), and odes to Mickey Mouse, Edith Piaf, and Charlie Parker, and much more. They even recorded a brilliantly funny, damnably infectious narrative song about the inevitable tragedy of marrying someone from another planet, “I Married a Martian.” As Russell sings in conclusion, “I married a Martian / They’re good in the movies / Dramatic potential / But they’re not so hot in real life.”

Russell’s tremulous tenor vocals that suddenly swoop into a falsetto register and the parody of dark menace occasionally implied in Ron’s stage persona might be daunting for some. Whatever your tastes might be, these guys are prolific, amusing, and idiosyncratic, making Sparks more than simply a fascinating subject for a documentary. They are an enduring creative force.