Casanova: The Seduction of Europe at the Fine Arts Museum of San Francisco

Beginning this month, the Legion of Honor will have on view more than 80 works of art —paintings, sculptures, works on paper, period furnishings, delicate porcelains, and lavish period costumes — to recreate the world of 18th-century Europe, “with one of its most colorful characters, Giacomo Casanova (Italian, 1725–1798), as guide.”

Casanova was indeed colorful, engaging in a number of professions throughout his life — writer, gambler, spy, military officer, violinist, and was one of the greatest travelers of all time. The luxury and opulence of this time will be brought to life in all its Rococo finery through artworks acting as representatives of the abundant lifestyles of their owners. Placed in the architectural design reminiscent of these original environments, mannequins dressed in period costumes surrounded by decorative arts tell the story of this age.

“Objects like these would have been part of the cumulative display of luxury found in the show palaces of Europe,” says Martin Chapman, curator in charge of European Decorative Arts and Sculpture.

Europe — Venice, Constantinople, Versailles, and St. Petersburg. He knew the most prominent figures of the age, including monarchs like Louis XV of France, Catherine the Great of Russia, popes, and intellectuals such as Voltaire and Benjamin Franklin. Casanova knew everyone and wrote it all down. He’s perhaps most famous for his 12-volume autobiography The Story of My Life, which documents his womanizing, frauds, and broken promises all in an unequaled account of 18th-century society; in fact it is considered one of the most authentic sources of European social life. His amorous habits, and the scandalous sexual proclivities associated with them, became synonymous with his name. Artworks reflecting these themes include Francois Boucher’s Venus on the Waves, and Francis Hayman’s David Garrick and Mrs. Pritchard in Benjamin Hoadly’s “The Suspicious Husband.” 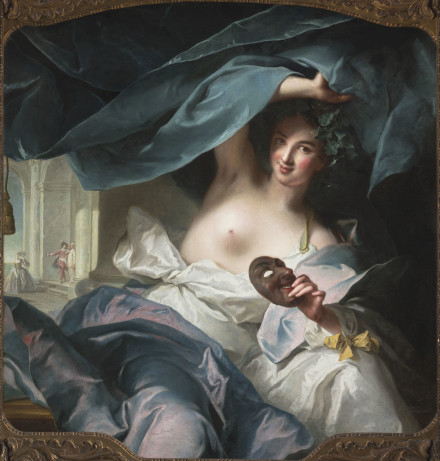 At one point his libertine ways led to his being arrested for impiety, tried by the Inquisition and imprisoned in 1755 for nearly a year before he escaped. Casanova was also a multitalented intellectual speaking many languages and, considered a witty conversationalist by his peers, was able to infiltrate the palaces of the wealthy.

In addition to Italy, France, and England, Casanova journeyed in Poland, Austria, the Netherlands, Russia, Flanders, and Spain, logging more than 40,000 miles over six decades in his search for indulgent experiences and adventure. Some of these destinations are featured in the exhibition, including Giovanni Antonio Canal’s The Square of Saint Mark’s and the Piazetta.