Presented in partnership with the San Francisco Unified School District, AIM is the longest running and most comprehensive program of its kind in the country, providing free music education to first through fifth grade students in every public elementary school in San Francisco.

The gathering at Sanchez Elementary School began with remarks by Sakurako Fisher, who highlighted the remarkable partnership between the San Francisco Symphony and the SFUSD, which led to the creation of AIM in 1988. Fisher then presented congratulation letters sent to the symphony by Sen. Dianne Feinstein, Sen. Kamala Harris, and Congresswoman Nancy Pelosi. “Every time I see the AIM program in action, my hope in mankind is renewed and my commitment to art and music,” Fisher said. 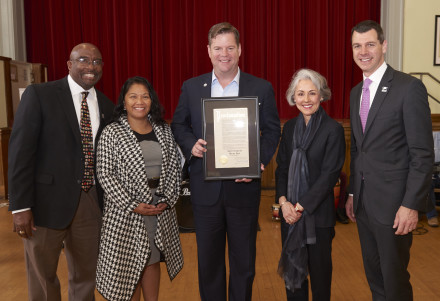 Superintendent Matthews highlighted the significance of AIM’s 1988 creation, and shared his own experience with the program, both as a public-school teacher and as a principal. “There are two pieces that really stand out to me about the program: its equity and consistency. This program is one of the only arts programs that every single elementary student in our district has access to, and that is critical. The symphony has been empowering our school district teachers for 30 years, and this is worth celebrating,” Matthews said.

The program concluded after third and fourth grade students from Sanchez Elementary filed into the school’s cafetorium to enjoy a lively educational performance, presented by AIM teaching ensemble Caribbean Express. Students and guests engaged in a fast-paced and interactive exploration of island music — from Reggae to Calypso to Merengue — by the ensemble comprising steel pans, conga, bongos, claves, cowbell, drum kit, and electric bass.