Chapter 13: Every dog has its day 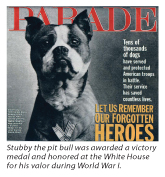 Stories of pit bull heroism abound – you just never hear them.
The mainstream media loves to report bad news about pit bulls. They also like to misinform. As a journalist and proud pit bull parent, I am embarrassed by the lack of knowledge reporters have and the lack of research they do before they shoot off their keyboards. When Diane Whipple was mauled to death in her Pacific Heights apartment in 2001, the media immediately began referring to the two dogs as pit bulls when, in fact, they were Presa Canarios. They also neglected to mention that the owner, Marjorie Knoller, reportedly encouraged the attack. In her account before a grand jury, Knoller said she briefly tried to stop Whipple’s bleeding, but then concentrated on finding her keys. As Whipple lay dying, Knoller didn’t call 911. Justice at long last prevailed on Sept. 22 when a judge denied Knoller a new trial and ordered that her 2002 jury conviction for second-degree murder be reinstated. She was sentenced to 15 years to life in prison.

In nearly all fatal dog attacks, the owner, either directly or indirectly, is at fault. Dogs are not born inherently vicious – no one has ever met a vicious puppy. Horrible humans like Marjorie Knoller and Michael Vick, the NFL thug now imprisoned for running a dog-fighting ring, turn dogs vicious by abusing them and misusing their power. Unfortunately, pit bulls are a breed of choice among the morally bankrupt, in part because of their strong builds and powerful jaws, but also because they are fiercely loyal to their owners and will do anything to please them, including kill or, in the case of dog fighting, be killed.

While the media loves to sensationalize and stereotype pit bulls, they don’t care to tell the good stories about what is and historically always has been a very heroic breed. The same traits that make pit bulls a favorite breed for bad guys – intelligence, loyalty, easily trainable – also make them the ideal dog to have around should you have the misfortune of running into bad guys yourself.

Here are a few of the good pit bull stories you never hear:

• A pit bull named Stubby was America’s first canine war hero – he earned several medals during World War I and was honored at the White House.

• The Ken-L-Ration dog hero of 1993 was a pit bull named Weela who saved 30 people, 29 dogs, 13 horses, and a cat during a flood in Southern California. Weela crossed the river to reach animals stranded on an island pulling 30-pound bags of food in a backpack loaded by her owners. During one of these trips, Weela encountered 30 people trying to cross the floodwaters. By barking and running back and forth, she refused to let them cross at the point where the waters ran fast and deep. She led them to a shallow upstream where she helped them cross to safety.

• Sixteen-month-old Dixie was inducted into the Georgia Animal Hall of Fame after she saved several children from a Cottonmouth snake. While standing between the snake and the kids, Dixie was bitten twice. Her owner raced her to the vet where, after several days on intravenous antibiotics, Dixie made a full recovery.

• A pit bull named Norton was the only one to hear owner Ann Mathews collapse after a severe reaction to a spider bite. He managed to awaken Matthews’s husband, Barrie, and lead him to the nearly unconscious woman. Barrie Matthews called 911 and, after several days in the hospital, Ann made a full recovery.

• In Spring Valley, N.Y., a pit bull rescued her owner from a sexual assault after an intruder crawled through her window while she slept. The woman managed to get away and open her bedroom door where her pit bull, waiting on the other side, rushed into the room and scared off the attacker.

• In Queens, N.Y., Heather Fretes responded to her pit bull Bleu’s incessant barking at the fence. She heard a little girl screaming for help on the other side and ran out to find a man trying to rape the child. Fretes scared the man off and took the girl to safety.

• In Santa Rosa, an intruder slipped through the open window of a little girl’s bedroom and tried to abduct her. What he didn’t know was that the little girl’s pit bull was sleeping on the other side of the bed. The dog cornered the would-be kidnapper and barked until the girl’s parents came to the room and called 911.

• In San Jose, a man attacked a woman in her doorway and began strangling her. The woman called her pit bull, Maya, who was in the other room. Maya ripped at his arm until he let go of her owner’s throat. Though he managed to flee, police swabbed a smudge of blood from Maya’s right eye, which turned out to be human DNA. They matched the sample to 37-year-old Anthony Easley, previously convicted of two sexual felonies in Solano County and a robbery in Contra Costa. As a third striker, Easley faces life in prison if convicted.

Personality is the pits

• In the early 1900s, pit bulls earned the moniker “nanny dogs” because parents used them to baby-sit their children.

• Petey, the faithful piebald pooch from The Little Rascals, was a pit bull. He spent countless hours with his child co-stars and was one of the most intelligent and beloved Hollywood dogs of all time.

• Helen Keller and Presidents Theodore Roosevelt and Woodrow Wilson are among the many famous and historical figures who have had pit bulls.

• After the explosion of the space shuttle Columbia, a pit bull search and rescue dog named Dakota helped find the remains of the astronauts who lost their lives.
• Popsicle, who got his name after police found him in a freezer during a drug raid, is now a renowned drug-sniffer for the DEA.

• The National Canine Temperament Testing Association tested 122 breeds, and pit bulls placed near the top with a 95 percent passing rate. The dogs saved from Michael Vick’s house of horrors, despite everything they had been through, passed the court-ordered assessment and are living happy, normal lives with rescue groups, in foster homes, and with forever families.