“A lot of shelter dogs are mutts like me.”
– Barack Obama on adopting a dog at his first press conference, Nov. 7, 2008

As soon as Barack Obama made the public promise to daughters Sasha and Malia of a presidential puppy, Jasmine and I started getting letters. “You are such a great advocate for rescue dogs, you have to write about this,” one reader said. Truthfully, I had planned to share a list of holiday gift ideas, but Presidential Puppygate trumps bully sticks and pink sparkly collars.

Dogs played a role in this election long before the puppy promise. When Sarah Palin quipped that the only difference between soccer moms and pit bulls was lipstick, I wanted to strangle her through the television – couldn’t she have said John McCain? He’s just as famous for having a bad temper as the ubiquitous stereotypical pit bull, and frankly he hasn’t endured nearly as much bad press. Before the world knew that Malia was allergic to fur, a lot of folks on chat boards were suggesting that the Obamas adopt a pit bull and name her Lipstick. As a pit bull owner I can tell you that my unfeminine flower, Jasmine, would rather chase a soccer ball than watch one; and she doesn’t even like to bathe, never mind wear lipstick. (She does, however, know that Africa is a continent.)

If the idea of a pit bull in the White House seems far-fetched, Lipstick wouldn’t have been the first: Teddy Roosevelt had one named Jack, who, rumor has it, once pulled down the French Ambassador’s pants at a White House event a la Little Miss Coppertone. Even Jack knew those French diplomats needed to lighten up.

While the Obamas say they want to rescue a dog, there is no shortage of blogs out there pushing for the purchase of a purebred. One blogger wrote, “With a purebred, you know its lineage and temperament. Rescue dogs usually have emotional issues and behavior problems.” While there certainly are poised purebreds, not all purebreds are perfect by any means, including the current First Dog, a Scottie named Barney. While accompanying President Bush at a White House lawn press conference, Barney bit a reporter; and the PR rep for the Boston Celtics says Barney also bit her during a celebration ceremony for the team. Evidently, going from the White House to the doghouse has Barney feeling a bit anxious. If it makes him feel any better, his master is going to be right there with him.

Trust me, Jasmine has her issues – every now and then the Jazmanian Devil strikes again and I come home to piles of stuffing from disemboweled toys and the mail riddled with teeth marks. On the other hand, my friend’s pedigreed Yorkie pees on the floor (and on me if I pick him up), bites children, barks and shakes incessantly every time he is left alone, and chews his paws to the bone out of anxiety. He is currently on puppy Prozac. 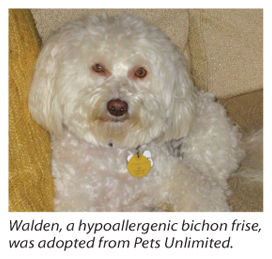 Now that the dog is out of the bag about Malia being allergic, the hunt is on for a hypoallergenic pooch (which, by the way, does not mean nonallergenic; it’s a better, but not foolproof option). The Obamas say they still want to rescue a dog, and while the allergies certainly narrow the scope, it’s still doable. If they choose a purebred poodle, there are plenty of them waiting for homes – every American Kennel Club-recognized breed heads a national rescue effort, and more than 25 percent of dogs in shelters are purebreds. A check of Petfinder.com turned up thousands of available purebred hypoallergenic dogs (and mixed ones as well). In fact, our copy editor extraordinaire, Lynette Majer, found her hypoallergenic and adorable bichon frise-poodle, Walden, at Pets Unlimited.

One dog I implore the First Family not to get is a Labradoodle. These hybreeds have become, as Christian from “Project Runway” would say, a hot mess; and though Malia is partial to Labradoodles, having one in the White House would only push their popularity, and thus the over-breeding, over the edge. A cross between a Labrador and a poodle, Labradoodles were first bred in Australia in the late 1980s for allergic people in need of seeing-eye dogs. Since they first appeared in the late nineties here in America, doodles have become the dog du jour, with puppies commanding thousands of dollars. The Australians had spent a decade breeding Labradoodles with Labradoodles to refine the coat and characteristics, but breeders here saw dollar signs and began crossing purebred Labs with purebred poodles, creating essentially a first-generation hybrid. As more and more doodles are bred, their traits become more and more indistinguishable. When Jazzy and I first started going to the dog park, we met a woman with a chocolate brown dog named Snickers. He wasn’t the brightest bulb in the box, and he bared little resemblance to those Aussie guide dogs. He was huge and lanky with wavy hair, a long collie-like snout, and beady yellow eyes barely visible under a shag of bangs. “What kind of dog is that?” I asked. “A Labradoodle,” she said incredulously. She continued to throw a Frisbee and Snickers continued to look at it, forcing her to walk over and pick it up. “Come on, Snickers, get the Frisbee,” she pleaded, unaware that she had spent several thousand dollars on an alien from the planet Over-doodle.

No matter what hypoallergenic breed the Obamas choose, they should first and foremost find a dog that speaks to their hearts. I found Jazzy on PetFinder.com, nestled amongst the nearly 5,000 pit bulls searching for homes. They were all adorable, and if I could, I would have taken them all, but Jazzy’s insolent expression and pool blue eyes reeled me in, and I knew immediately that she was the one. All of the animals I’ve had throughout my life have come from shelters or, in the case of my beloved orange tabby Steven, from the back of a neighbor’s ’57 Cadillac in a cluttered garage.

Whether abandoned at a shelter or born in the back of a Caddy, though, finding a pet has always involved having that certain feeling mixed with an ample dose of luck and timing – the same elements involved in finding human love, because when it comes right down to it, that’s what love is all about.