Chapter 18: Changing minds – and hearts – one person at a time 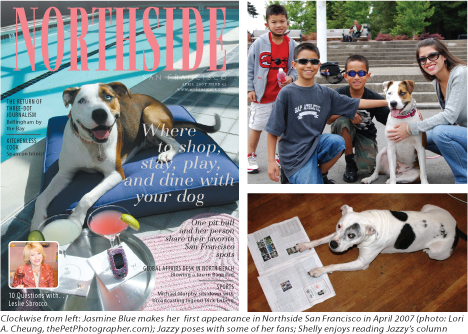 Jazzy and I would like to thank all of you for the supportive letters and kind words you’ve been sending our way. When I first decided to introduce Ms. Blue in April 2007, the idea was met with some resistance from friends and even staff. Jasmine and I spent several months staying at four-star hotels throughout San Francisco as research for the Northside San Francisco cover story, “Where to shop, stay, play, and dine with your dog,” with the subtitle, “One pit bull and her person share their favorite San Francisco spots.”

I was surprised that several people suggested that I not say “pit bull,” on the cover, just “dog.” That, I explained, was pretty silly considering it is obvious that she is, indeed, a pit bull. To everyone’s surprise, it was one of the most popular covers ever. One woman wrote, “Thank you for showing a pit bull looking happy and pampered instead of frothing at the mouth on the end of a chain.”

Encouraged by the response (and egged on by Jazzy’s eccentric personality), I decided to turn our everyday adventures into a column. It started out being life with a dog in San Francisco, but over time it has evolved to also be about life with a pit bull, which, as anyone who has a pit bull knows, is very different from life with any other breed.

In last month’s column, “The pitfalls of breedism,” I talked about some of the more difficult aspects – the prejudice we face every time we go out for a walk, the ignorance (“Their jaws lock!”), and the media’s irresponsible hype.

In past columns I’ve also talked about the many funny pit bull traits – the loud, man-like snoring; the farts, or as we call them, “pittie poots,” that will make your eyes water and clear a room; the big, goofy grin and wagging butt; the desire to be a 70-pound lapdog; the ability to stretch that low-rider body clear across the bed and completely take it over. I’ve also written about the many good things you rarely hear about – the amazing loyalty, the strong love for their owner, the intelligence, and the fun-loving clown ever eager to please.

When my father passed away last June, I wrote about Jazzy’s incredible sensitivity to my reaction. She brought me every toy in her toy box, offering them one by one, trying to make me feel better as I lay crying on the bed. Shortly after, we had one of our rare heat waves, and I remember a hot, sticky night when Jazzy still wanted to sleep as close as possible; pressed up against me, panting away, but determined to stay touching me. Sometimes her need to be close pushes me almost entirely off the bed. I have tried moving to the other side, but when I wake up, I am hanging off the edge again, Jazzy having moved all the way over to once again press as close to me as possible.

Some of the best moments since starting the column have been running into people who recognize her. On a weekend walk in Golden Gate Park last summer, we ran into a family who wanted to take pictures with her. Ever the ham, Jazzy posed with the professionalism of a supermodel on a Vogue shoot. She’s so used to cameras pointing at her, in fact, that when two women from Germany asked me to take a photo of them, Jazzy effortlessly inserted herself in the frame. They laughed – and took home a photo of them with Jazzy.

Perhaps the best part of writing this column has been the minds – and hearts – that Jasmine has changed. After my column about Jazzy’s reaction to my father’s passing, a woman wrote, “I used to be afraid of pit bulls. I didn’t know anything about them. After reading about Jasmine Blue, I am beginning to think differently.” And one of the best letters came from a man who had just returned from a shelter: “My family and I have been thinking of adopting a dog for nearly a year. We never would have considered a pit bull until reading your column, but I wanted to let you know that today we brought home Bruno, a boxer/pit bull mix, and he – and we – have Jasmine Blue to thank.”

Most encouraging is seeing how many pit bulls are finding the loving homes they deserve – not nearly enough, but more than ever before. I received an e-mail from a surgeon in Pacific Heights who wanted to share a photo of Baby – a muscular, crop-eared, red-nosed pit bull he adopted from a rescue organization. “Sometimes when we take walks in the neighborhood, people cross the street to avoid us,” he wrote. “Little do they know I could be operating on them tomorrow. I am not a monster, just a doctor with a dog.”

And just today I received one of my favorite letters ever, from another Pacific Heights resident. He included an adorable photo of his own pit bull – reading Jasmine’s column! The owner wrote: “Chapter 17 (“The pitfalls of breedism”) was the best yet in the ongoing story of Jasmine Blue. As an owner of an American Staffie named Shelly who also loves to read about Jasmine, I found it refreshing to read your article. I am sick of people (other dog owners who you would think might be at least a little understanding) bad-mouthing my dog. Beagles are more prone to violence! That old man who said ‘All those dogs should be killed’ should be fixed himself. What a terrible thing for anyone to say, but I run into similar comments all the time. I am also so very happy to see that you mentioned BAD RAP, because those people are saints in my book. Keep the chapters coming – you’ve become a spokesperson for all of us who own these wonderful, gentle animals. All dogs go to heaven, but I don’t know that I can say the same for breedist dog owners.”

Keep your letters coming – Jazzy and I read all of them together, and we love the photos, too. Especially the ones from dogs eager to take my blue-eyed beauty on a date. After my column about the outcome of her DNA test, one “dog” wrote: “I don’t mind at all about that bit of Glen of Imaal terrier in you. If we weren’t fixed, I bet we’d make beautiful lab-pit bull-Rotweiller-German shepherd-bull mastiff-Glen of Imaal terrier puppies together. Since we are, how about a stroll at Crissy Field sometime?”

Jazzy would love to hear from you, especially if you’re a big handsome Rottweiler or Bullmastiff. She’s open to meeting a Glen of Imaal terrier, but only if he outweighs her by at least five pounds… [email protected]