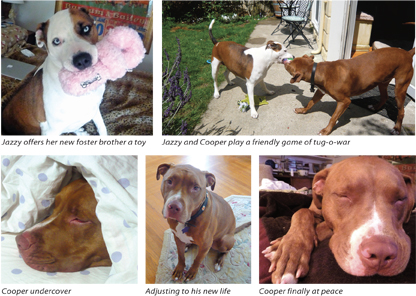 After several visits to the “stray-and-surrender” kennels at San Francisco Animal Care and Control with Rocket Dog Rescue founder Pali Boucher, I found myself constantly thinking about the frightened, confused, desperate dogs I had met. Without Pali, who takes the toughest cases – mostly pit bulls – the wards of the City’s Doggie Insane Asylum would have no hope at all. As it is, with the San Francisco SPCA unwilling to take more than a couple of pit bulls at a time, Pali is constantly struggling to find foster homes to save them from otherwise certain death. She works tirelessly, visiting the shelter nearly every day, putting CIP (Call Interested Party) tags on their paperwork to buy them some time.

The pit bull overpopulation problem is huge – it is estimated that only one in 900 pit bulls and pit bull mixes makes it out of a shelter alive. This includes everything from the hundreds of victims confiscated each year in dog-fighting busts to litters of newborn puppies. Macho jerks that think having a big, tough-looking dog and keeping him “intact” makes them more of a man are rampant; I meet at least one nearly every trip Jazzy and I take to Fort Funston. And at least twice a week I run into pit bull owners who insist their dog is “special” and needs to be bred.

A couple of weeks ago in Golden Gate Park, I met a man with a very average looking fawn-colored male pit bull. When I asked him why his dog was not fixed, he gave me the famous line: “Because he’s really special and I want to breed him.” Feeling my blood boiling, I asked if he thought Jazzy was special. He looked down at her and smiled, “Oh, yeah, man – she’s amazing! Look at those eyes and her markings … Are you going to breed her?” As always, I took the opportunity to explain that Jazzy came from death row at a shelter, and she was fixed because every minute of every day pit bulls are put to death simply because there are too many of them and not enough qualified homes. He seemed surprised by the facts, but as he walked away, I seriously doubted that I changed his mind. Later that day, I received an e-mail from a pit bull advocate containing the photos of 15 dogs at a shelter in Van Nuys – all were slated for euthanasia the next day if rescue groups, already inundated themselves, couldn’t find a way to take them. As I scrolled down the page, I saw gorgeous, healthy, smiling faces, some as young as two months – and three fawn-colored males nearly identical to the “special” one I’d met in the park.

While animal overpopulation is a much bigger problem in places like Bakersfield and Fresno – where shelters get as many as 500 dogs a week and have a 97 percent kill rate – San Francisco is not doing its job, either; especially when it comes to pit bulls. The SF/SPCA canceled its successful free spay and neuter program, and Animal Care and Control doesn’t enforce the mandatory pit bull sterilization law set forth under Director Carl Friedman in 2006. When the law was first implemented, it resulted in 21 percent fewer pits and pit mixes being impounded and a 24 percent drop in euthanasia. But over the last few years I have begun seeing more and more unaltered pit bulls on the streets – and Pali is seeing more and more pit bulls facing death row.

On a sunny Thursday afternoon, I pile my special pit bull into the car and head down to ACC for a meet-and-greet with the shy, shutdown, blue-nose pit bull, Maggie. A frazzled Pali dashes through the shelter. “This is the woman who wants to foster Cooper,” Pali tells me, nodding to the woman, who is trying to keep up with Pali’s frantic pace. “Why don’t you meet us next to the exercise yard, and after she spends time with Cooper, we can bring Maggie out to meet Jasmine?”

A few minutes later, the giant, striking red-nose pit mix I met the week before, Cooper, is loping ecstatically around the exercise yard’s AstroTurf. The woman who wants to foster him told Pali that she was “looking for a big, athletic pit bull,” but as she stands in the middle of the fenced yard, she looks petrified. “He’s too big,” she tells Pali. “And he’s too crazy.” Pali explains that this is the first time Cooper has been outside in nearly two months – he’s been slowly going insane within the confines of the stray-and-surrender kennels. The young woman folds her arm. “No,” she says, “He’s too big.”

I can visibly see Pali’s heart sink – this was Cooper’s last chance. Three foster homes have fallen through, and ACC can’t keep him much longer. “He’s going crazy in there,” Pali tells me from behind the chain link fence. “I would take him, but he’s too big for my house … I have to get him out …” Just then, Cooper romps to the gate and notices Jazzy, who has gone into full flirt mode, her big butt up in the air wagging and her front legs on the ground. She whimpers, and Cooper touches his nose to hers; they share a kiss between the wires. “I’ll take him,” I blurt out. “If you can take Maggie, I will take Cooper.” Pali’s eyes light up – Maggie is much smaller. “That works,” she says. “Let’s bring Jazzy in and see how they do.”

Eric, who works with ACC, puts Cooper on a leash and walks him around the exercise yard. I walk Jazzy the opposite way, and slowly we come to the middle, allowing the two dogs to casually meet and sniff. Again, Jazzy goes into the play pose – butt in the air, front legs on the ground – and I can tell she wants to go crazy with Cooper. I call it “the zoomies” – when dogs suddenly tuck their butts and run around in circles full force, enticing others to take up the chase. After several moments, it is obvious this is a love match.

Jazzy and I wait with Pali and fill out foster parent paperwork for Rocket Dog while Eric prepares the two dogs to leave the shelter. It is obvious from his expression that he is happy to see them get out.

Half an hour later we head home, Jazzy riding shotgun and Cooper in the back seat. At 87 pounds, he sits taller than most men, his big, square head nearly touching the roof of my Honda Element. He closes his eyes and sniffs the fresh air as it whooshes by. He has no idea how he got here, just as he had no idea how he ended up at ACC. In fact, Cooper’s is a classic and all-too-familiar story of owner irresponsibility: A woman got him as a puppy, and when he became large and inconvenient, left him with a friend, who left him at a doggie daycare, which then surrendered him to ACC.

When we arrive home, I let both dogs out and they cavort in the garden. Cooper looks like a horse. Jazzy, big and beefy in most circles at 70 pounds, looks petite and feminine. No wonder she likes him.

After sniffing and marking every inch of the backyard, Cooper checks out the house; he is surprisingly graceful. In the evening he lies on Jazzy’s dog bed chewing his bully stick, while Jazzy chews hers in the usual spot, on her blanket at the foot of my bed. We settle into the nightly routine – I grab the latest copy of The New Yorker and Jazzy falls asleep, snoring like Tony Soprano after too many whiskeys.

Aside from Jazzy’s snoring, it is all amazingly quiet and civilized – not what I expected, somehow, from an 87-pound pit bull on his first day of freedom in nearly three months. Finally Cooper inches closer, rests his chin at the foot of the bed, and sighs.

“What’s up Cooper?” I ask. He takes another deep sigh, and glances down at the mattress. Suddenly I realize what’s going on – Cooper is a gentleman; he wants to be invited. I pat the bed and, with that amazing grace, he jumps up. He stands next to me and begins nosing at the covers. Jazzy wakes up and gives him a dirty look. I start laughing. “What are you doing, Cooper?” He keeps nudging, and I realize he wants to sleep undercover. I lift the blankets and he slides below, flopping beside me in a huge heap. He takes the deepest sigh of all.

One of his hind legs is poking out and I notice a scabby sore, likely from sleeping on the cement in his kennel. (He was too big to fit in the cardboard box that served as his bed.) I open the nightstand drawer, grab a tube of antibiotic cream, dab it on the sore, and tuck his leg under the blankets with the rest of him.

Moments later I am reading to the harmonious stylings of the Snoring Pit Bull Symphony. This is the first good night’s sleep Cooper has had in months, and he is exhausted. I think how terrible it must have been for him not to be able to get under the thin, small blanket in his cage. I wonder how he could come out of such a horrible experience still gentle, sweet and loving. I wonder how anyone could have had him for two years and given him away like an old pair of shoes. I wonder, wherever she is, if Cooper’s former owner ever wonders whether he is alive or dead.

I wonder how the other dogs left behind in the dank, stark stray-and-surrender kennels are sleeping tonight.

Now more than ever, foster homes are needed for dogs of all breeds and sizes. To inquire about fostering a dog, or about volunteering, adopting or donating, please contact Rocket Dog Rescue at 415-756-8188, or visit their Web site at www.rocketdogrescue.org.

If you are looking for a pet, please consider adoption through a rescue group like Rocket Dog or a shelter like San Francisco Animal Care and Control (1200 15th Street at Alabama, 415-554-6364). To view adoptable pets online, visit www.sfgov.org/site/acc, or www.PetFinder.com.