Chapter 32: The case of the killer puppies

The “killer puppies,” their rescuers and Jasmine Blue
by Susan Dyer Reynolds

It was a Saturday afternoon in late April at San Francisco Animal Care and Control when Lana Bajsel, executive director of Give Me Shelter Cat Rescue, overheard two officers discussing a litter of puppies. “The parents were deemed vicious and dangerous so it’s best they are put down,” one officer said to the other.

The puppies were confiscated from a home where one of the parent dogs had bitten a woman. Because they had a prior designation of “vicious and dangerous” in San Mateo County, the parent dogs, along with eight 6-week-old puppies, were taken away and brought to the shelter. Though the woman didn’t want to press charges, both parent dogs were euthanized.

I always hate hearing stories like this because 100 percent of the time, the humans are at fault. They certainly were in this case: breeding dogs into an overpopulated world where one out of two shelter animals is killed for lack of homes is irresponsible, having unaltered dogs is wrong (and in the case of pit bulls in San Francisco, it’s illegal); but letting anyone near a mother and father dog with newborn puppies is downright stupid. Of course it’s always the dogs that pay the ultimate price, even though it’s always humans that let them down.

When Lana first called me about the fate of the eight puppies, I told her I would help in any way I could. As the day wore on, I began receiving more calls from people within the shelter as well as rescues. Several groups, including Rocket Dog and Big Dawgs, offered to take the puppies, but ACC did not want to release them. Several phone calls and e-mails later, ACC finally agreed to let the rescue groups take the puppies, and a plan was set in motion.

The whole concept of nature versus nurture plays out every day in the human world. Lindbergh Williams, son of the infamous D.C. Sniper, John Allen Muhammad, lives a quiet, normal life despite the fact his father was a monster. When his father was executed last November, 27-year-old Williams reached out to the press to tell the world that he didn’t want to be judged by the crimes of a father he didn’t even know. “I am the son of the D.C. Sniper, but not him,” he told reporters. “ … I am my own man and make my own decisions.”

Lindbergh only got to know his father toward the very end through a few letters and phone calls. He is a law-abiding citizen with a family and, interestingly, he became an animal control officer. On his own time, he began rescuing pit bulls. Perhaps it takes an underdog to know one.

The parents of the ACC puppies were euthanized for aggression, but that aggression was likely due to protecting the litter. It is also likely the owners, losers who kept them “intact” and allowed them to breed, never socialized the dogs. When I saw the paperwork for the puppies, I was astounded and once again convinced that the temperament testing done in shelters is woefully inadequate. Each pup, listed under its “A” number (the way animals are tracked in the system), was given a pass or fail depending upon the tester’s interpretation of its behavior. “A280757, A280756, A280754, A280755 – No pass. Too fearful/undersocialized.” “A280758, A280753 – passed, but was a bit borderline. Fearful and undersocialized, but saw potential there.” Perhaps the most disturbing assessment was for A280751, which was missing in the system. “Once you find him,” writes the tester, “I would paste in the following notes: No pass behavior. Backed away at kennel approach. No initial approach in room, trembling, but eventually came over. Cringed/trembled on stroking. Tense with tail tucked on handling, but allowed all. After stayed in tester lap, slightly trembling. Fearful of toys and play … not suitable for ACC adoption.”

When Jazzy and I showed up at ACC the following weekend to greet the puppies as they went to their new foster homes, I expected to see freakishly large 6-week-old killer puppies, but as the first one came out in the arms of Big Dawgs Rescue founder Joanne Rivero, the assessments – and the fact they were nearly killed – seemed even more devastating and absurd: weak and trembling, squinting her eyes in the sunlight, puppy number one was no bigger than a coffee cup. When Joanne handed her to Lana, the puppy’s tiny tail wagged ever so slightly as she nuzzled into Lana’s neck. How in the world, I wondered, could anyone judge these tiny, helpless babies? Of course they were fearful and undersocialized – they had just gone through a traumatic experience of being taken away from their mother, stuck in a cage, and handled, possibly for the very first time, by humans.
If the puppies had a voice like Lindbergh Williams, they would no doubt ask the same thing he asked: to be judged on their own behavior and not the behavior of parents they barely knew. 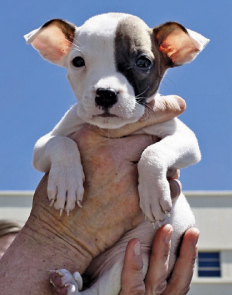 PUPDATE: A DNA test on one of the puppies found they are almost equal parts American Staffordshire terrier and Weimaraner, mixed with a little English bulldog.

I plan to follow the progress of the puppies in a monthly “Pupdate,” leading up to a cover story one year from now. In the coming weeks, as they are adopted into forever families, we will watch them learn to trust, play and love. In doting, responsible homes, I predict the pups will blossom into wonderful dogs. It may not be scientific, but it will certainly give us all an interesting look at nature versus nurture.