(L to R) High Tail Hotel’s Julia and Victoria with Ike, Kelly and Stevie, three rescue dogs currently in their care and looking for homes.
by Susan Dyer Reynolds

On the same day that Jasmine Blue and I saw eight 6-week-old Weimaraner-pit bull-bulldog mix puppies off to their new foster homes and the beginning of the rest of their lives, we also saw Big D and his 13-year-old chow-golden retriever mix, Velvet, pull up in front of San Francisco Animal Care and Control. As Big D helped Velvet out of the car, I saw a look of sadness and dread on his face, and I knew exactly what was going on.

Big D is a friend of my dear friend Steve, so I knew that he had recently lost the place where he had lived for nearly 14 years after the owner decided to sell it and move to Palm Springs. He had been staying with his friend Alexis while trying to find another apartment, but Alexis wasn’t thrilled playing host to Big D’s old dog. The nonprofit San Francisco Council of Grand Dukes and Grand Duchesses works with many charities, including the Breast Cancer Fund, Project Open Hand, the Night Ministry of San Francisco, and the San Francisco AIDS Foundation, and as a former grand duchess, Big D helped raise tens of thousands of dollars for worthy causes. Now Big D needed help himself, but finding a place to live in San Francisco on a retiree’s limited budget was hard enough without trying to find a place that would also take Velvet.

On that warm Saturday, Alexis had persuaded Big D that giving Velvet up was better than both of them winding up homeless, so as we watched the young puppies leave the parking lot of ACC, we saw Velvet come full circle, back to the very place where Big D had adopted her nearly 14 years ago.
Velvet was one of a litter of five – three fawn-colored males with black markings and two females, all black. A friend came along with Big D to pick out a puppy, but the little fluff balls were all so cute that neither could decide. They wrote the numbers of the puppies down on pieces of paper and told the woman at the front desk to pick one. Since that fateful day, Big D and Velvet (named because her soft fur felt like black velvet) had been inseparable. While Alexis seemed eager to take Velvet into the shelter, Big D did not. “They’ll find a home for her,” Alexis coaxed. But I knew that wasn’t true.
With America’s pet overpopulation crisis (half of the eight million animals entering the system each year are euthanized), it’s hard enough to find homes for young, healthy animals. It may make people feel better when they dump their old dog to think the dog will find a new home, but the reality is that most will be put down. Muttville, a wonderful organization that specializes in rescuing elderly dogs, knows that all too well – their foster homes are constantly full. With the downturn of the economy came a flood of animals relinquished to city shelters by their owners, and dogs like Velvet don’t stand a chance against frisky babies with bright eyes and bushy tails.

As anyone at Muttville can attest, older dogs make wonderful companions. They have outgrown the youthful often rebellious, crazy, testing stages and have settled into their personalities; they’re housetrained, calm, and happy to cuddle on the sofa. That’s not to say they can’t still be active – my friend Isaac’s 10-year-old standard poodle, Jacques, gives Jazzy a run for her bully stick every time he visits, and many of Jazzy’s favorite playmates are more than twice her age. I cannot imagine my life without Jazzy and she’s only 4 years old, so the thought of giving her up in her golden years is unimaginable.

Unfortunately, our society does not value its elderly, be they human or canine. I can’t even count on both hands how many people flippantly told me to put my father in a home rather than take care of him myself. I am so glad I didn’t listen – despite his dementia, my father was still a vibrant man with fanciful stories to tell, and I got to spend the last year of his life sipping hot chocolate and laughing with him as he told those stories of my mother, the Navy, and his teaching career over and over, allowing me to file them away as treasured memories.

As Big D balked at taking Velvet into the shelter, I called over an expert, Pali Boucher, founder of Rocket Dog Rescue, who came up with an idea. “Let’s call the High Tail Hotel,” she said. “Maybe Victoria can board her for a bit while we figure something out.” 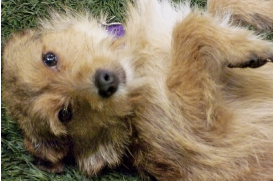 Stevie hopes to find a home where he’ll get lots of belly rubs.

Victoria Robinson, who started her dog-walking and pet-sitting service, North Beach Pets, in 1997, opened the High Tail for her own dogs, one of which was disabled; it’s a beautiful facility that includes a 2,000 square-foot indoor artificial grass play area. She welcomes all, but has a soft spot for senior or disabled dogs. One of her clients has a rescued 10-year-old lab – the dog’s original owners surrendered him to a shelter because they were moving and their kids “didn’t want an old dog in a new house.” Sadly, she says stories like this are common. Victoria also works tirelessly to help San Francisco’s independent rescue groups by providing temporary boarding while they search for foster homes. At the front desk, you will find photos of the dogs currently in her care and available for adoption, and sometimes they find homes with High Tail clients.

With one phone call, Victoria agreed to take Velvet sight unseen, but because Big D needed to find proof of her vaccinations she couldn’t stay at the High Tail right away; the first two nights, two of the staff, Olivia and Alissa, went above and beyond, taking Velvet home to stay with them.

Every day before starting his apartment hunt, Big D came to take Velvet for a walk. Meanwhile, word got out about Big D’s plight and Tom Oliver of the San Francisco Hearing Dog program, another friend of Big D’s, stepped forward and invited Big D and Velvet to live with him. Over the next few weeks, it was just like old times – Big D and Velvet were once again inseparable.

Early one morning, Big D arose to find Velvet lying peacefully beside him like always, but when he leaned close, he didn’t hear her breathing. At 13½, Velvet had quietly died in her sleep. As sad as I was to hear of Velvet’s death, there was some solace in knowing that she spent her last days as all old dogs should – with the person she loyally stood by through the best years of her life; content, happy and loved. We should all be so lucky.

Sherri Franklin, founder of Muttville, was recently awarded the prestigious Jefferson Award for Public Service, given to those who do outstanding work and inspire others to do the same. To adopt a senior dog, become a foster parent, or make a donation: www.muttville.org or e-mail [email protected]

The High Tail Hotel: 2275 Revere Avenue (at Industrial). For more information on doggie daycare and boarding services, or to meet one of the available dogs featured in this column: 415-913-7101, www.hightailhotel.com.