Chapter 49: The dogs that wandered in and out my door

And oh you’re on your way, such a
beautiful day, and nothing can bring
you down now
And oh you’re blown away, sorrowless
days, you’re livin’ in the moment
And all your hopes alive, today.
– “Blown Away,” by Marc Robillard

There’s a magical moment that happens when you adopt a pet; when you know, beyond any doubt, that he or she is “the one.” I felt that connection to Jasmine Blue when I first saw her goofy little face pop up on PetFinder.com – those big blue eyes and that insolent expression; all the confidence in the world and ready to love and trust, despite her rough start in life.

Fostering for a nonprofit rescue organization brings another kind of magic.

It’s like being both a matchmaker and an adoption agent: You meet prospective parents and determine whether they’re “the ones” for the animal you have taken under your wing. And it’s incredibly rewarding.

My first foster dog, Cooper, an intelligent, sensitive, eccentric pit bull mix the size of a miniature pony, was pulled from Animal Care and Control by Rocket Dog when his time ran out. I had him for less than a month when a wonderful family in Half Moon Bay adopted him, and I’m happy to report that he’s doing great. His daily trips to Mavericks Beach have gained him the nickname “The Ambassador of Mavericks” for his gentle giant nature and model behavior.

Next came three sickly four-month-old pit mix puppies from Kern County, one of the most notorious shelters in the state, where hundreds of dogs per week enter (including papered purebreds) but few make it out. The sisters (Chapter 25 of this column, “The luckiest pups in Bakersfield”) came on a transport truck with a dozen other former death-row doggies heading for various rescues. Within a week, Rocket Dog had homes for the two black and white girls, but the little grey one didn’t even last a night: my friend Steve came to meet my new charges and, after a couple of cocktails and puppy breath kisses, took her home. I see Blue (a nod to her “big sister” Jasmine Blue and her gorgeous blue-grey coat) nearly every day. She’s almost three and is one of the sweetest, smartest dogs I’ve ever known. When I watch her run and play on the beach with Jazzy and see her joyful exuberance for life, I can’t help but think how close she came to dying on a cold metal table in Bakersfield.

Perhaps the saddest case of all was Petey, a white pit bull with auburn markings and a perfect patch around his left eye. A woman in Oakland found him starving and sharing meals with a feral cat colony she cared for. He was severely emaciated and someone had tied a rubber band around his tail, causing a bad infection. Barely a year old, Petey was also mostly blind from cataracts. The woman brought him to the Oakland shelter where, as a pit bull with problems at an overcrowded facility, he faced certain death. I had him for just a week, but it was enough to save him and for Rocket Dog to find him a home with a lovely couple. Petey was the only foster dog I lost touch with – until a few weeks ago at the Rocket Dog Rescue 10th Anniversary celebration at Pet Food Express in Stonestown. I spotted a stunning dog – muscular, wiggling a short stump of a tail, and grinning from pittie ear to ear. “That looks like a foster dog I had named Petey,” I told his mom. “This IS Petey!” she said. His name is now Truffles; his tail had to be amputated and he still has cataracts, though his parents are giving him drops that have improved his vision about 50 percent. I sat down on the ground and Truffles came close, gently licking my cheek while shamelessly presenting his butt for a good scratch. “He’s such a great dog,” his dad chimed in. 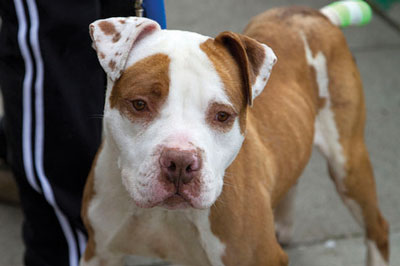 And I was so happy to have him, too, just long enough.

Times are tough for rescue groups. Donations are down and owner surrenders are up due to a bad economy. This a lethal combination for thousands of animals in California’s struggling city and county shelters where, due to lack of space and money, they are often killed after just a few days. With private humane societies like the San Francisco SPCA filling their coffers with donations but taking very few animals (the SF/SPCA has $80 million in assets and an annual budget of nearly $20 million, but saves just a few thousand animals per year), the work falls on small rescue groups like Grateful Dogs, Rocket Dog, Give Me Shelter, Muttville, and Wonder Dog. Working with budgets smaller than the SF/SPCA’s top executive salaries, they can’t afford dedicated facilities and therefore must depend on a network of volunteers and foster homes.

Even a short-term foster can save a life, and donations are desperately needed to keep these rescue organizations running. Volunteers are also needed, and, of course, there are many wonderful animals waiting to be adopted. If you would like more information about fostering, volunteering, adopting, or making a donation (donations are accepted online and by mail), please contact the following rescues:

Give Me Shelter Cat Rescue