The great thing about being a dog is that you have no idea what’s coming five minutes from now, never mind the next day. When I dropped Jasmine Blue off at Dr. Sams’ clinic in Mill Valley, my heart was racing. As the vet tech led her to the back, Jazzy wagged her tail and smiled back at me as she turned the corner. I started to cry. Johnny and Jazzy’s best friend, Abe, the greyhound-pit mix I once fostered, were along to distract me.

GraceAnn Walden, my friend and fellow Northside San Francisco food columnist, had prepared, in honor of my roots, a wonderful Sicilian sauce over penne at her home in Novato. Just before we started lunch, my cell phone rang – it was Dr. Sams. “Jasmine’s surgery was a big success,” he told me. “She’s already putting weight on the leg.”

Jazzy came home with a shaved butt (where they did the epidural) and a shaved left hind leg with Frankendog-like metal staples. She also came home with several bottles full of pills – for pain, for inflammation, a sedative in case she felt a little too good, and a 10-day supply of antibiotics (Johnny joked that we didn’t want to end up with a Junkie Jazzy). I tried every treat known to dogkind, including duck liver pate, which had worked well during another round of meds a few months back, but she was having none of it. I tried hotdogs, hamburgers, tuna melts, and rolled up lunchmeat, all to no avail. She was like someone who puts a cherry stem in her mouth and spits out a bow – the treat went in, the pill came out. Then my trusty assistant, Steve, made a rogue suggestion: “How about those doggie pill pockets?” Sure enough, when I stuffed the pill in the soft liver treat and squished the top shut, she gulped it down. 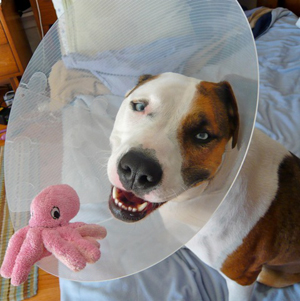 Walks were tricky, too. She was allowed just three, five-minute walks per day for the first two weeks. Jazzy’s quick recovery was the best, and also the worst, thing to happen – she wanted to sprint down the street, which was a no-no. Even quick trips to the backyard had to be on a leash, something the fauna appreciated. But Princess Pork Chop is smart and sly – she waited for the gardener to come through the garden apartment door and then slipped between his legs – boing, boing, boing – she did her famous bunny-hop around the yard, snarling and snorting at invisible squirrels. It’s usually quite hysterical to watch – she leaps in the air, stiff legged and on all fours; she grabs stuffed toys and shakes the life out of them as if to show the squirrels what she’s made of. They sit atop the fence and laugh at her just like I do. But this bunny-hop nearly gave me a heart attack. I immediately called Dr. Sams and told him what had happened. “Don’t worry,” he said in his calm, reassuring voice. “It happens during most recoveries at least once – dogs get out; they get off leash; they find stairs, or jump on the sofa … just make sure it doesn’t happen again.”

I banished the gardener from the garden apartment door until further notice.

As we fell into the routine of our walks, things got easier. Ever the clown, Jazz decided she loved the new orange plush octopus I bought her as a get-well gift so much that she needed to take it on walks around the block. Serious and steadfast, she circled Buena Vista Terrace with eight pudgy orange legs sticking out of her mouth. Neighbors giggled, and one woman even slowed down in her car to take a cell phone picture. I’m sure the neighbors also think I’m crazier than a hoot owl because I laughed until my stomach hurt.

Perhaps the funniest walk occurred when we headed out between storms, Jazzy in her pink patent leather raincoat, octopus legs flailing away. We got about halfway down the block when it started to rain heavily. Without missing a beat and still with a great sense of purpose, Jazz turned around, head down, ears back, and walked as quickly as I’d let her back to the house. (She still never dropped the octopus.)

I used to brag to friends that I adopted the most beautiful dog in the world, and she came spayed, vaccinated and housebroken all for just $200. Now, after one surgery and facing another on the right leg down the road, I have a bionic pit bull that cost more than three champion AKC golden retrievers.

TPLO surgery, $4,000. Watching Jazzy wag her butt and feel like herself again, priceless.

Pit Notes: The results of the 2006 American Temperament Test reveal that pit bulls achieved a passing score of 84.4 percent. To put this in perspective, the combined score of all dog breeds tested was 81.5 percent, and America’s dog du jour, the golden retriever, scored 83.8 percent. (To view all of the breed results, visit www.atts.org.)

Anyone who has been following the Michael Vick dogs has seen the amazing resilience of this owner-focused and fiercely loyal breed. All but one of the dogs rescued from Vick’s dog fighting ring passed a rigid temperament test. The dogs are now enjoying life in their new foster homes, eager to trust, love, lick, and cuddle the very species that abused, tortured and nearly killed them. While “pit bull” type dogs do account for more deaths to humans than other breed, it is important to note how often law enforcement and the media misidentify them. For example, the tragic death of Diane Whipple was blamed on pit bulls; however, the dogs that attacked her were presa canarios, a breed not related to pit bulls in any way. If you think it’s easy to identify a pit bull terrier, try some of these “Find the pit bull” games – it’s a lot harder than you might think: