Chapter 9: A Glen of Imaal terrier in the woodpile…

“She’s pit bull and what?” the woman walking her golden retriever asked as Jasmine Blue and I passed by in Buena Vista Park.

I get this question nearly every time we’re out. It’s obvious that Jasmine is a lot American Staffordshire terrier, and a lot less obvious that she is also something else. Everyone, from her foster mother at the shelter to my vet to the dog walkers at Corona Heights Dog Park, has tossed out guesses. Australian shepherd is the most common – she does “herd” a bit; she could, before her surgery, “cut” with the best of them; and she has those mesmerizing crystal blue eyes.

Personally, I never saw the Aussie in her. I knew when I adopted her that she was a Staffie mix – I grew up with pit bulls and pit bull mixes and, when it came time to adopt a dog, there was no other choice for me; pitties are my favorite breed. Jazzy has all the traits I love, both personality-wise and physically: She’s intelligent, loyal, loving, clownish, cuddly, and eager to please; and she’s a strong, muscular, low-rider, square-jawed, wrinkle-headed, and expressive. Her coloring is also very Staffie: She’s a tricolor – a combination of red, white and blue – and she’s piebald, which I adore, with a brownish-red patch on one side of her face and white on the other. People often say she looks like Nipper, the RCA dog, or Petey from the Our Gang television series. And then there are the telltale traits every pit bull parent knows so well: her giant goofy grin and wiggle butt of happiness, her worse-than-any-boyfriend-ever snoring, and her horrendous gas – loud, chase-everyone-out-of-the-room “pittie poots” that will make your eyes water. 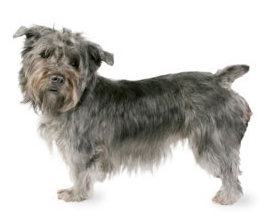 I’m a huge proponent of adoption and mutts – I’ve never bought a dog and, as long as millions of wonderful animals are being put down every year for lack of loving homes, I never will. Jazzy, like all mutts, is completely unique. If you put her in a dog park with 100 other dogs, I could pick her out from a mile away. It’s doubtful, as beautiful as her golden retriever is, that the lady in Buena Vista Park could do the same. I don’t care about Ms. Blue’s pedigree, but I am curious where she came from.

One morning, while Jazzy was in for her yearly shots, I asked Dr. Wong to do the test, which costs around a hundred bucks. He took a blood sample and submitted it to the lab, and Jazzy and I began the three-week wait for the results.

When I got the packet in the mail, I was like a kid on Christmas, tearing into it and searching for the “breed detection” page. I wasn’t at all surprised to discover that she was primarily American Staffordshire terrier, one of several breeds commonly referred to as “pit bulls.” I was surprised, however, to find out that she had a few other breeds in her lineage, including Rottweiler, Bullmastiff, a pinch of Lab and … Glen of Imaal terrier? When I Googled the breed, an image of a short, scruffy, bewhiskered, Jack Russell-cute pooch popped up. Rottweiler – maybe. Bullmastiff – maybe. Lab …
possibly. Glen of Imaal terrier – I don’t think so. But as I’ve learned from obsessively TiVo-ing my favorite show, Forensic Files, DNA doesn’t lie. Because I didn’t see any of the physical traits, I flipped to the “Behavior & History” section of the report. Glens, it turns out, originated in the town of their namesake in Ireland in the 1600s. They’re still fairly rare in the U.S., introduced here in the 1930s and recognized by the AKC in 2004. I scanned the list of behaviors, and there I found a match: intelligent; alert; loyal. I quickly skimmed bullmastiff and Rotweiller traits: intelligent; alert; loyal. Finally, I read the Labrador retriever traits: happy-go-lucky, food motivated, love to fetch. Well, it did say just a pinch.

Jazzy would love to hear from you, especially if you’re a big, handsome Rottweiler or Bullmastiff. She’s open to meeting a Glen of Imaal terrier, but only if he outweighs her by at least five pounds … [email protected]