Consider the next mayor a contract worker on probation

Winner who doesn’t please constituents could lose job in 2019

San Franciscans have a unique opportunity to change the course of history in a year and a half. That’s how long the next mayor, who will be elected June 5 to fill the remainder of the late Ed Lee’s tenure, has to show voters that they made the right decision. If not, residents can vote that mayor off the island in 2019, when another election takes place for a four-year term. Frankly, the turnaround between Lee’s sudden passing and next month’s election was so quick I can’t imagine endorsing any of the current candidates — not because they don’t all possess some good mayoral qualities, but because I don’t feel I’ve heard enough about their real plans. Sure, I’ve heard sound bites at a few hastily thrown together debates. But there hasn’t been enough time to go deep into how exactly they will lead what was once a world-class city out of a pile of feces, needles, car break-ins, and homeless tent encampments.

Ideally the next mayor would be a combination of the four main candidates and a dash of current mayor Mark Farrell. He or she would have the legislative experience and common-sense approach of Mark Leno; the equally formidable experience and fearless independence of Angela Alioto; the exuberant ability of Jane Kim to reach immigrant and other marginalized communities; London Breed’s toughness and graceful willingness to reach across the aisle; and Mark Farrell’s financial smarts and business acumen (perhaps the most important — and underrated — traits of all). But while each candidate has strengths, they also have weaknesses, and all have blundered along the short campaign trail. 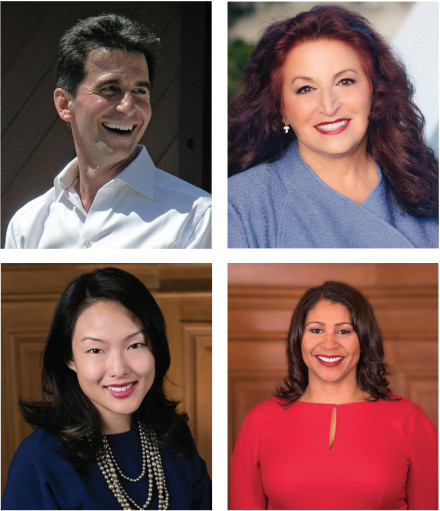 The Good: When I covered the Board of Supervisors for the New Fillmore newspaper, Mark Leno was often the only member who made sense. He went on to serve 14 years as a state assemblyman and a state senator, revered as one of California’s most effective lawmakers, authoring over 160 bills. Early in his time in Sacramento, he called me out of the blue. “I’m in the city this week, and I’d love to meet for breakfast and hear what’s on the minds of Marina residents,” he said. We met on Chestnut Street, where Leno was engaged, poised, and sincere.

As a San Francisco supervisor Leno was ahead of his time, particularly when it came to housing. In 1999, he asked the city attorney to draft legislation to permit increased density along busy transit corridors and he wanted maximum building heights raised from 40 to 50 feet. However, Leno’s record also reflects concern for renters: He amended the Ellis Act to remove SROs, protecting the most vulnerable low-income residents from eviction.

The Bad: As a supervisor representing the Castro District, Leno was one of the most vociferous opponents of formula retail, supporting Proposition L, the “slow growth” measure to protect small businesses from “big-box” stores. Anyone who’s been to the Castro recently can see that legislation didn’t work, with small businesses unable to pay exorbitant rents, while chains that can afford it are stifled. In fact, according to Hoodline, the Castro has a vacancy rate of nearly 13 percent, with over 50 empty retail spaces. Occupancy is around 87 percent, compared to the rest of the city at 97 percent. Perhaps Leno should have sponsored retail rent control instead.

The Blunder: Earlier this year, Leno attended the grand reopening of Sweet Inspirations Bakery Café — a Castro eatery accused of flouting the very legislation Leno championed. When Ike Shehadeh of Ike’s Place, a sandwich chain with 35 locations, took over the cafe from the previous proprietor, he began selling his sandwiches and branding the location with the Ike’s trademark (menus, bags, uniforms, window façades). The Planning Commission hit Sweet Inspirations with two formula retail violations in two years, and with fines piling up, Shehadeh closed shop.

The Good: While her name is familiar to us old-timers, Angela Alioto has some catching up to do with millennial voters, some who probably have no idea her father was the late Mayor Joseph Alioto. Fiercely independent and tough as nails, Alioto served on the San Francisco Board of Supervisors from 1988 to 1997 and was board president from 1993 to 1995. As I wrote here last October (“Angela Alioto on the 25th anniversary of the smoking ban”), she took on the gargantuan tobacco industry and won, leading to smoking bans all over the world. Her promise to oust the directors of the city’s most troubled and bloated departments — Mohammed Nuru of Public Works, Ed Reiskin of Municipal Transportation Agency, and Phil Ginsburg of Recreation and Park — is almost reason enough to elect her in my book. Add to that the fact she owes former mayor Willie Brown nothing (and actually has a contentious history with him), and she’s that much more appealing.

The Bad: Alioto has promised to clean up homeless tent encampments in 100 days, but that’s a pipedream, just like her longing for San Francisco to return to its golden era. That time has passed, perhaps a metaphor for Alioto’s unsuccessful bids to follow in her father’s footsteps, losing mayoral races in 1991, 1995, and 2003.

The Blunder: Last January, Alioto proposed renaming Kearny Street after Ed Lee, just one day after then-acting Mayor London Breed suggested doing the same with Portsmouth Square. The choice of Kearny, which covers a large swath of Chinatown, seemed an obvious ploy to win the Chinese American vote, yet Alioto accused Breed, telling the San Francisco Chronicle: “Of course the reason she’s doing this right now is because she’s a candidate. I believe that it’s an attempt to bond with Chinese voters.”

The Good: A civil rights attorney with degrees from both Stanford and UC Berkeley and a former president of the San Francisco Board of Education, Jane Kim was elected to the Board of Supervisors in 2011, the first Korean-American supervisor in the nation. Representing District 6, perhaps her most-lauded achievement was negotiating with the San Francisco Giants to increase the number of affordable units at the Mission Rock development from 33 to 40 percent. She also authored Proposition W, which passed in 2016, raising taxes on real estate deals over $5 million to make tuition free at City College of San Francisco. Senator Bernie Sanders praised the program as “a model for the whole country.”

The Bad: Despite her reputation for underdog advocacy, in 2011 Kim sponsored the infamous “Twitter tax break,” giving the multibillion-dollar social media firm a six-year payroll tax exemption for moving to crime- and drug-infested mid-Market. Seven years later, mid-Market is worse than ever and Twitter is richer than ever, having done little to help the community while reaping the tax windfall.

The Blunder: Kim blasted fellow candidate London Breed for taking support from Super PACs (“independent expenditure committees” that can raise unlimited funds while candidates are limited to $500 per individual), yet the Service Employees International Union Local 1021 Candidate PAC has spent $185,000 on Kim’s campaign. Her outcry was all for show, because candidates have no control over how Super PACs spend their money.

The Good: London Breed not only has the best name in the race, she has the best story. Raised by her grandmother in the Western Addition’s public projects, Breed grew up in the midst of violence and poverty, seeing her first homicide when she was just 12 years old. Her younger sister died of a drug overdose and her older brother is in prison. Demonstrating the same tenacity she is known for today, the middle Breed child graduated from UC Davis, got an internship in Mayor Willie Brown’s Office of Housing and Neighborhood Services, and worked her way up to executive director of the African American Art & Culture Complex in her old neighborhood, which she is credited with revitalizing. She went on to receive a master’s degree in public administration from the University of San Francisco. In 2012, Breed upset Mayor Lee-appointed District 5 incumbent Christine Olague as a moderate in a sea of progressive candidates. Reelected in 2016, Breed was also selected twice by her peers to serve as president of the Board of Supervisors, a job she still holds. Perhaps Breed’s most compelling asset is her ability to work with moderates and progressives alike. She’s pro-housing, at all levels, and knows the city can’t legislate its way out of this shortage. Breed also recognizes that we can’t solve the homeless crisis without addressing mental illness and drug addiction, and she supports giving judges more leeway in conservatorship for severe cases.

The Bad: It’s well known that tech tycoon Ron Conway endorsed Breed when she became acting mayor after Lee’s death (at Lee’s funeral, no less), which means he thinks she is the most likely candidate to continue doing business as usual. Breed has lent some credence to that theory by stating she wants to “continue Ed Lee’s work and legacy.” Unfortunately, Lee’s work and legacy left the city in shambles.

The Blunder: Around 70 campaign ads for Breed were briefly plastered in Muni shelters, violating a policy that bans any material promoting a political candidate. Breed laughed it off, saying, “I guess I just can’t get comfortable anywhere without someone trying to throw me out.” That, of course, was a not-so-thinly veiled jab at her progressive colleagues, who replaced her as acting mayor with Mark Farrell.