Cronyism is still alive and well at City Hall

And Mayor London Breed’s friends are making a killing 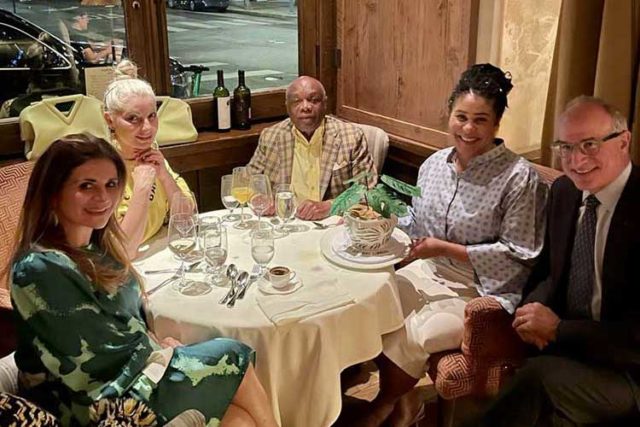 The Booker T. Washington Community Service Center was created under the name Victory Club during World War I as a gathering spot for Black soldiers. It closed after the war and reopened in 1920, renamed for the educator, orator, and author who advised several U.S. presidents. Over the years the center fell into disrepair, and in 2018, the old site at 800 Presidio Avenue was demolished and replaced with a $55 million, 70,000 square foot mixed-use building featuring a childcare facility, youth programming space, recording studios, gymnasium, and 50 units of affordable housing (including 24 units for transitioning youth from foster care). That all sounds terrific, but according to board member Julian Davis, behind the fancy façade is another tale of cronyism at San Francisco City Hall, and this one reaches all the way to Room 200.

Davis, a graduate of Brown University and U.C. Hastings College of the Law, is a Bay Area native who has been a progressive activist and organizer in San Francisco since 2002. He has worked in government and the nonprofit legal sectors with a focus on community development, civil rights, social justice, and environmental causes. He joined the Booker T. Washington Center’s board of directors in 2006, serving as president from 2009 through 2012, when he left to start Telegraph Law Group. In 2017, then-executive director Patricia Scott wanted to retire and invited Davis back to help her make a smooth transition. He was appointed secretary, tasked with implementing a record keeping system and writing bylaws and best practices procedures. But, Davis says, in April 2021 the board improperly removed him after he objected to rampant ethical, fiduciary, and legal violations. It turns out, some of those board members, including Vice President Farah Makras, are associates or close friends of Mayor London Breed.

A quick Internet search brings up numerous photos of Makras and her husband, Victor, schmoozing with Breed. If the name Victor Makras sounds familiar, that’s because he’s a politically connected real estate broker with a long history of serving on city commissions. He resigned from the Port Commission last year over alleged ethics violations tied to the Mission Rock development project. Mr. and Mrs. Makras are also tight with Breed’s mentor, Willie Brown, and they regularly host the mayor and the former mayor at their Marina Boulevard home for exclusive parties and political fundraisers. The couple even hosted a reception for Breed’s mayoral campaign in 2018 (with a “suggested contribution” of $500 a head). Mrs. Makras was also photographed with Breed attending a Nov. 7, 2019 birthday party for socialite Gorretti Lo Lui at The French Laundry, star chef Thomas Keller’s Michelin-starred restaurant in Yountville, held just one day after and in the same room as Gov. Gavin Newsom’s infamous dinner.

On August 21, Makras threw a private birthday party for the Mayor at Kokkari Estiatorio, an upscale Greek restaurant in the Financial District, with Breed mentor Willie Brown, his longtime partner Sonya Molodestskaya, and her husband, Victor. The caption for the photo on Instagram reads, “a simple celebration, a gathering of friends,” but the custom cake by Camisha’s Cakes, designed to look like one of Breed’s houseplants, was likely in the $500 range. Prices at Kokkari aren’t cheap, either, with a bowl of avgolemono — a traditional egg-lemon soup with chicken and rice — costing $11.75.

So perhaps it shouldn’t come as a surprise that Vice President Makras supported, as Davis put it, “hiring unqualified or grossly overpaid Breed affiliated insiders.” During the search for a new executive director, Makras proposed bringing Breed’s close friend Brenda Wright on board as a consultant — and paying her $175 per hour. At a rushed special meeting called by Makras herself, the proposal was advanced, Davis says, without diligence or consideration of conflicts. Wright, a senior vice president and regional manager of California Community Development for Wells Fargo, may look good on paper but, besides being a close friend of Breed’s, she also happens to be the longtime romantic partner of Steve Bowdry, the center’s treasurer. Davis balked at both the cronyism and the dollar figure — which he said was twice the market rate for similar nonprofits — and the issue was tabled for further review.

After the meeting, Davis says he spoke with Makras by phone, questioning why she wanted to waste the center’s resources to pay for a pricy consultant. Makras replied there would be no added cost for the center because Breed promised to pay for the excess cost of Wright’s fees with additional grants from the city. Davis asked Makras if she had an issue with that, and she responded “absolutely not.” That’s when Davis explained it was unlawful for a public charity to pay more than market rate for any services. Makras said she was unaware of that. Davis then told Makras that Breed’s promise to funnel city funds to hire Wright was not only unlawful, it was unethical. He says Makras laughed and replied, “It happens all the time.”

In a complaint filed May 14, 2021 with the California attorney general’s registry of charitable trusts, Davis recites a litany of conflicts and corruption that he also outlined to board President Carlos Reed in a letter dated March 28, 2021. He cites embezzlement by prior Executive Director Regina Marsh, who obtained a personal debit card connected to the center’s bank accounts which she used for travel, including in connection with securing a new job. Even more egregious, Davis says, is that thousands of dollars may have gone to Marsh’s new out-of-state boss for unauthorized “consulting services.” Davis puts the blame squarely on Reed’s “lack of oversight and failure to institute responsible fiduciary best practices.” Davis also points to the inherent conflict of interest posed by Reed himself in his dual role as president of the center and athletic director of the Drew School, the chief tenant of the gymnasium, which resulted in months of unpaid rent.

In the complaint filed with the attorney general, Davis says not only did the board improperly remove him, it was retaliatory, occurring exactly one month after he sent the letter to Reed outlining his concerns.

“Unfortunately, the cronyism and corruption typical of this political set reaches well beyond city departments and has its tentacles in our cherished community organizations as well,” Davis said in an email. “Restoring integrity to the Booker T. Washington Center will require, among other things, the immediate resignation of the bad actors on this board of directors.”

As for finding a new board leader, the Executive Committee assumed total control over the hiring process, Davis says, with only candidates privately vetted and approved by Breed considered for the position. And who did they choose? City Hall insider Shakirah Simley, appointed in 2019 as the inaugural director of Breed’s Office of Racial Equity. Prior to that, Simley served as an aide to Vallie Brown, who was appointed by Breed to fill her vacated seat as District 5 supervisor (Brown lost the job to Dean Preston in the next election). And what would a story about cronyism be without mentioning the San Francisco Public Utilities Commission? From September 2017 through August 2018, Simley was the acting executive director and community outreach manager for the Southeast Community Center, where her duties included “managing SFPUC communications initiatives in the Southeast with an internal collaborative spirit.”