Downtown’s up and down 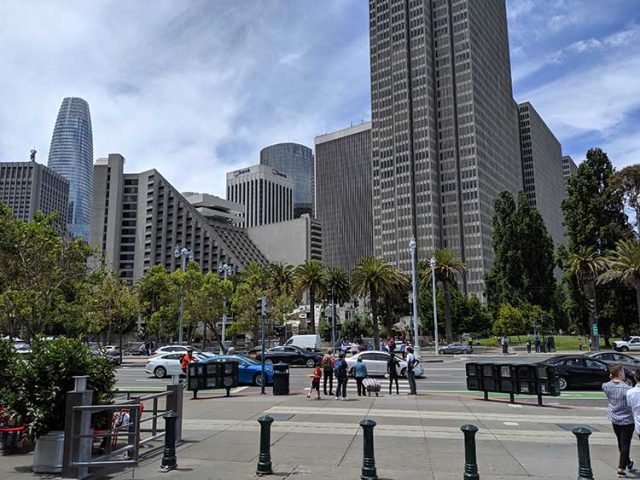 Downtown is more than just a dense area of offices and stores; it is a cultural center fed by the coming together of people, businesses, artists, ideas, and activities. Photo: John Zipperer
by John Zipperer

As someone who grew up in small cities, I’ve always had a fascination with big cities, and particularly their downtowns. Tall buildings, lots of people, the energy of hundreds of thousands of people going about doing their thing all make central business districts (CBDs) exciting places.

For the first year after moving to Chicago, I commuted to the suburbs for my job. But then I got a job downtown, right on North Michigan Avenue. I’d get off the bus almost a mile north of my office building almost every day, enjoying the walk on one of the world’s great urban streets. At lunch time I could step out the front doors and go in any direction to find countless food opportunities. I was downtown almost every Saturday for shopping or a movie or just to wander around and take it all in. Even my church was downtown.

You get the point. I like downtowns. But so do millions of other people, and for many of the same reasons. They are concentrations of economic opportunities, they bring together people from all different backgrounds and neighborhoods, and they are perfect for producing cultural and social events.

City governments also like downtowns, at least in part because they are economic engines for the whole city. CBDs not only employ residents, but each day they pull in commuter workers from the suburbs; all those downtown workers support a lot of local businesses of all sizes and help pump millions of dollars into the local economy in general and city tax coffers in particular.

But if you’ve been downtown in San Francisco lately, you know things aren’t exactly exciting there these days.

Wade Rose, president of Advance San Francisco, said, “We’ve lost approximately 300,000 people per day [downtown] less than what we were experiencing in 2019. That’s a lot of people. That’s a lot of transactions which support middle income jobs.” Rose told a Commonwealth Club program on the future of the city’s downtown that the “ramifications of that population leaving San Francisco literally in a month — 90 percent of all office workers left in March 2020 — is huge.”

San Francisco Standard reporter Kevin Truong said, “There were hopes this fall would be a turning point where employees would come back and streets would be filled as they once were. That hasn’t happened. While things have certainly improved from the near-apocalyptic emptiness of the early days of the pandemic, today many buildings remain quiet on most days, and human traffic on sidewalks and streets is still limited.”

After a failed attempt to get people enthused about getting back on BART or Muni and returning to their downtown offices, Mayor London Breed threw in the towel. “Life as we knew it before the pandemic is not going to go back,” Breed told Bloomberg News. “This whole work-from-home thing is here to stay.”

There are efforts underway to do everything from converting empty office space into housing to adding art happenings and other attempts to draw people out of their homes. I suspect that’ll succeed to some degree, but if you can be as productive working from your home as you were going downtown, plus you reclaim an hour or two of total commuting time each day, then why in the world would you want to be downtown every single workday?

Big cities are not necessary for successful big companies. Germany rather famously has many of its globe-beating businesses based not in Berlin or Munich but in small and mid-size cities. Bertelsmann is one of the world’s biggest media conglomerates, but it’s headquartered in the German town of Gütersloh, which has fewer residents (100,000) than Bertelsmann has employees globally (145,000). Or consider the Bavarian town of Herzogenaurach, which has a whopping 24,000 residents; it is also home to the multibillion dollar Puma and Adidas sporting goods companies.

Back in the 1990s, a commercial real estate expert predicted that most city downtowns would shrink in the near future, with only a handful of downtowns across the country surviving and only if they had 24-hour life to them. I thought that was overstated then, and I think the “downtowns are dead forever” pronouncements are overstated today. We’re not in the “new normal”; we’re still in a time of transition. Early in the pandemic, I heard a real estate professor say that it took four years for theater attendance to return to normal after the 1917–20 flu pandemic. But it did return.

In the short term, big city downtowns are going to hurt, being seen as expensive infrastructure in newly decentralized communities. Midterm, they’ll seek to speed up their recoveries by being creative, trying to “reinvent” themselves. But long term, downtowns will flourish because of what they are and what no other place is.