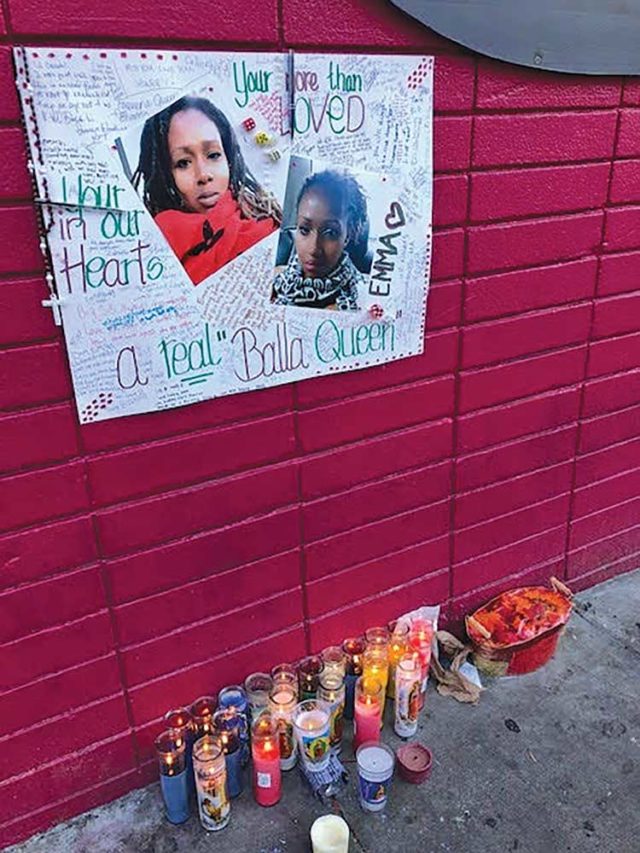 A makeshift memorial to Emma Hunt in the Tenderloin near the place of her murder. Photo: Used with Permission
by Susan Dyer Reynolds

“Basically, they’re saying my daughter was nothing, she wasn’t worth anything anyway. And that’s just not true and I get so angry about that.”

After her mother’s death from starvation, 6-year-old Emma Hunt cared for herself and her baby sister in the harsh streets of Ethiopia for a year. That’s when Sherree DeYoe adopted the two and brought them to Manteca in San Joaquin County.

In 2020 at age 32, Hunt was the mother of two children living in San Francisco. After battling years of drug addiction, she told her family she had been clean for months and planned to enter a residential treatment program on Monday, Jan. 6. But even after surviving Ethiopia and an addiction to drugs, Hunt could not survive the violent streets of San Francisco’s Tenderloin District. Around 4 a.m. on Sunday, Jan. 5, after an altercation near Larkin and O’Farrell Streets, a man pulled out a gun and shot her once in the neck and three times in the chest.

One week later, officers from the San Francisco Police Department’s narcotics squad arrested 18-year-old Kevin Lopez-Figueroa and a 17-year-old juvenile, booking them both on suspicion of murder and conspiracy. Though the incident was captured on videotape, San Francisco District Attorney Chesa Boudin declined to file murder charges against the two suspects, deciding instead on firearms charges. “The people have the burden of proving beyond a reasonable doubt that a defendant did not act in lawful self-defense,” said then-spokesman for the district attorney’s office Alex Bastian.

BRINGING A MILK CRATE TO A GUNFIGHT

Investigators allowed Hunt’s family to view the surveillance tape. They were outraged at what they described as the careless steps made by Boudin. “Emma didn’t go after them with a knife. She hit him with the milk crate,” her adopted mother, Sherree DeYoe, told FOX40 News. “When you’re looking at the full circumstances, there’s intent there. They had strong intent to come down and do some sort of harm,” said Hunt’s stepfather, David DeYoe. According to the DeYoes, Figueroa and the juvenile suspect harassed Hunt for 30 to 40 minutes trying to get money from her, then left the scene and returned with a gun.

Police sources tell me that officers made an undercover drug buy from the juvenile suspect back in the Tenderloin just a week after Hunt’s murder. When I asked about Figueroa, the Sheriff’s Office responded that he was “not in San Francisco jail custody.” As Boudin is fond of reducing charges and releasing suspects on ankle monitors, this wasn’t surprising; however, I was surprised that Figueroa isn’t listed in the San Francisco Superior Court database — which means there is no trial date set for the firearms charge.

Hunt was one of three Black women in their 30s killed during a 30-day period in San Francisco. Latanette McDaniel, 35, was stabbed to death in Potrero Hill on Dec. 14, 2019, and Ronisha Cook, 33, was gunned down in the Tenderloin on Dec. 19, 2019. Between the three women, a total of 11 children were left motherless.

Supervisor Matt Haney, whose district includes the Tenderloin, spoke at a January 2020 press conference held near a makeshift memorial for Hunt. “What is most important is that we listen to the leaders within our community, listen to Black women in our community, leaders who tell us what we should do to prevent this in the future,” Haney said. Shamann Walton, now president of the Board of Supervisors, also attended, stating, “We want everyone to know that we take every violent crime seriously, making sure that the resources to address violence go to the areas and the neighborhoods, communities where we see it.” But over a year later, their words ring hollow as Hunt’s killers are free, while one of Cook’s killers wasn’t even charged — and went on to kill again.

This past Jan. 28 around 5 p.m., legendary private detective Jack Palladino, 76, whose clients over the decades included Hollywood stars and the Black Panthers, stepped out of his Haight Ashbury home on Page Street to take pictures in the neighborhood. A car pulled up and a man jumped out, attempting to steal Palladino’s high-priced camera. Palladino held on and hit his head on the pavement as the car dragged him. Witnesses ran to his aid, but several days later Palladino died in the hospital from his injuries. In what sounds like a movie plot, the private eye helped solve his own case when pictures taken on his camera revealed the suspects, leading to the arrests of 24-year-old Lawrence Thomas of Pittsburg and 23-year-old Tyjone Flournoy of San Francisco.

The name Flournoy sounded familiar, so I looked him up in an arrest database and discovered why: Flournoy was one of four men arrested for the 2019 murder of Ronisha Cook. Just before noon on Dec. 19, officers from Tenderloin Station on patrol in the area of Eddy and Leavenworth Streets heard gunfire. At the crime scene, witnesses described a vehicle that fled the scene. Officers located a vehicle matching the description with damage from gunfire in the area of Eighth and Folsom Streets. They also found Cook suffering from gunshot wounds and rendered aid, but she succumbed to her injuries at the hospital. Homicide Detail identified four suspects — 28-year-old Derick Session, 39-year-old Gary Owens, 31-year-old Robert Huntley, and 23-year-old Tyjone Flournoy.

The district attorney’s office charged only two of the men — Owens and Huntley — with Cook’s murder. Both men remain behind bars (still without trial dates). Session and Flournoy were released. After the attack on Palladino made the news, Boudin told the San Francisco Chronicle he “filed murder charges against the people we believe we can prove were the actual shooter and the driver of the car. At the time of the arrests, we asked police to keep investigating the two passengers in the car, including Mr. Flournoy.” It’s convenient for Boudin to fall back on one of his old standards by putting the onus on police; however, California Penal Code 182 PC states “If two or more people conspire to commit any crime, they shall be punishable in the same manner and to the same extent as is provided for the punishment of the felony.”

In other words, there were ways of keeping Flournoy and Session in jail while Boudin waited for “more evidence.” Instead, he set them free — and Flournoy is now facing charges in the murder of Palladino.

IS RACIAL JUSTICE ONLY FOR CRIMINALS?

Latanette McDaniel’s killer also remains behind bars. The next hearing is March 17, and again, no trial date has been set. On Dec. 14, 2019, shortly before midnight, McDaniel was stabbed in the Potrero Hill neighborhood. As she lay dying, she told investigators that a woman named Vernisha Mandigo killed her. The incident, along with McDaniel’s final words identifying Mandigo, were purportedly captured by police body cameras. Mandigo, 25 at the time, confessed to the killing. Since 2013, Mandigo has been arrested nearly 20 times in multiple jurisdictions, including San Francisco, for crimes including prostitution, receiving stolen property, and car theft. While none of her previous crimes were violent, the sheer volume of arrests was at the very least a cry for help. Yet Mandigo was released again and again.

In multiple interviews, Chesa Boudin has said his goal as San Francisco’s district attorney is to enforce the law equally, fight for racial justice and equity, and focus resources on root causes of crime to break the revolving door of America’s failed justice system. But actions speak louder than words. For Emma Hunt and Ronisha Cook, there is no justice for them or for their grieving families. Hunt’s killers are free, and one of Cook’s suspected killers was free to kill again. Latanette McDaniel died in the arms of investigators, her murder committed by another young woman who showed signs for nearly a decade she needed resources focused on her. Now, presumably, she will spend the rest of her life in prison. I say presumably because you can never be sure with Boudin.

‘MY FATHER SHOULD BE FREED TOO’

On May 6, 2020, Boudin wrote an op-ed for the Los Angeles Times titled, “I’m keeping San Francisco safer by emptying the jail. My father should be freed too.” He starts by saying people in prison “face a grave risk of falling ill, dying and spreading Covid-19” and admits the issue is personal because his 75-year-old father “lives in a prison cell.”

Boudin has never made any bones about the fact that much of his work is based on what happened as a result of his parents’ involvement in the Weather Underground, a militant group active in the ’60s and ’70s that bombed the Pentagon and the United States Capitol, among other targets. His mother, Kathy Boudin, pleaded guilty to felony murder and served 22 years in prison, and his father, David Gilbert, was sentenced to life for the 1981 heist of a Brinks truck in New York that resulted in the deaths of Brink’s guard Peter Paige and two Nyack policemen, Sgt. Edward O’Grady and Police Officer Waverly Brown. Using his newfound celebrity, Boudin has been actively campaigning for New York Gov. Andrew Cuomo to grant his father clemency. In his op-ed, Boudin describes his parents as “political activists,” points out that they were unarmed, and that other participants shot and killed the victims. He calls the crime a “botched robbery” and refers to his parents as “getaway drivers.”

Does Boudin’s understating of history cloud his judgment when it comes to murder cases? For example, did his belief that his parents were getaway drivers and not worthy of murder charges influence his choice to set Tjone Flournoy free because he was a passenger in the getaway car? In the Los Angeles Times op-ed, Boudin says making decisions “about who to incarcerate and for how long and who to release on what conditions” is “agonizing,” but he never mentions how agonizing those decisions are for the victims and their families. “For decades, criminal justice policy has been driven by the sometimes realistic fear that any person released could commit a heinous crime,” he continues. “Locking up millions of people destroys families and communities . . . ” Allowing violent repeat offenders back out on the streets, where their victims are predominantly people of color in poor neighborhoods, destroys families and communities, too. Where is their justice?