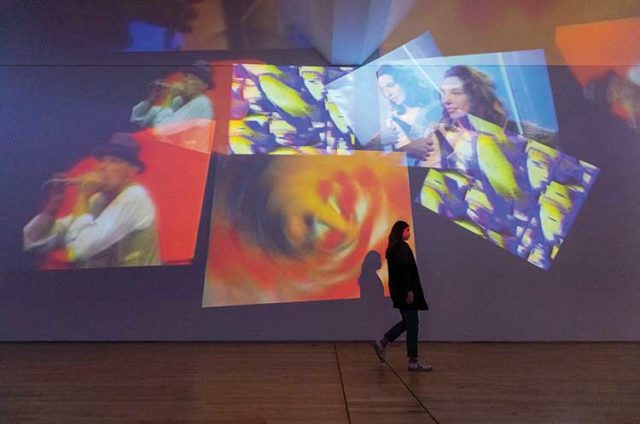 Nam June Paik has been a ubiquitous cultural presence for decades. If you know the expression “electronic superhighway,” you already know Paik, who is credited for coining the phrase in 1974 in reference to the future of communication in the Internet age. Now, SFMOMA will host the artist’s first West Coast retrospective through October 2021.

Paik was born in Seoul during the Japanese occupation of Korea. Living and working in Japan, Germany, and the United States contributed to his art themes of global connectedness. Studying music theory as a musician and experimenting with performance and telecommunications cemented his multidisciplinary approach.

“Nam June Paik is famous for being the historic father of video art, but his groundbreaking and contemporary influence is even more based on his crossover between all media,” said Rudolf Frieling, curator of media arts at SFMOMA. “Paik’s radical visual and musical aesthetic has a natural home here on the West Coast as a place for global connectivity.”

Always a collaborator, Paik worked with a wide range of performers from artists Joseph Beuys to the cellist Charlotte Moorman. In his career he played a key role in Fluxus, an international network of artists, composers, and poets who engaged in experimental art performances. His work has influenced musicians David Bowie, Laurie Anderson and Devo’s Mark Mothersbaugh, among others. Two robots in this presentation represent key collaborators, one dedicated to composer John Cage via John Cage Robot II (1995)and choreographer Merce Cunningham via Merce/Digital (1988). Televisions stacked and connected to resemble human forms reflect imagery from the artist’s work and lives.

Bringing together more than 200 works across all media spanning a five-decade career, the exhibition is organized thematically, uniting many of Paik’s most iconic and provocative works. Technology meets nature in TV Garden (1974-77/2002), a futuristic landscape in which television sets seemingly grow like blossoming flowers amidst foliage. An 18th-century wooden Buddha watches itself on a television, a nod to Paik’s Buddhist faith in TV Buddha (1974). The stillness of meditation mirrors back from the television like a reflection in a pool of water.

Sistine Chapel (1993) is the crown jewel of this retrospective. Presented in a larger scale than it has been at any other venue, Sistine Chapel at the SFMOMA is a hypnotic experience of tonality and images shown from multiple projectors. Originally winning the Golden Lion award at the Venice Biennale in 1993, the installation creates an immersive audiovisual experience —  a bath of sound and color remixing Paik’s past videos and collaborations.

In conjunction with this exhibition, SFMOMA will present Paik’s Video Commune online. Originally broadcast in 1970, Video Commune was an improvisational montage of scrambled television images accompanied by the music of the Beatles. During the original performance, Paik invited random passersby into the studio, allowing them to remix imagery as it was aired. The gallery presentation is a condensed videotape of the broadcast filmed from a television screen.

Video Commune is reborn in this retrospective as a participatory work on the exhibition webpage. Visitors can watch the silent video and create their own soundtrack of their choice using a selection of Beatles songs. Electronic Opera #1, a second video, invites the audience to close and open their eyes while viewing a series of abstract electronic patterns.

Be prepared to utilize all of your senses. Nam June Paik predicted the future of communication in the Internet age, and expanded the boundaries of what art can be. Perhaps most important, Nam June Paik invited us to join him.