Walker Evans is best known as a documentarian of the Great Depression. His photos from this era while working for the Farm Security Administration (which, as part of the New Deal, attempted to fight rural poverty), became some of the most recognizable images from this period. From Sept. 30 through Feb. 4, 2018, the SFMOMA presents an exclusive U.S. retrospective of Walker Evans’s work.

Born in St. Louis, Mo., in 1903, Evans was educated on the East Coast, attended Williams College, the Sorbonne, and College de France before settling in New York in the 1920s. It was here that Evans developed his photographic style documenting street life and the ordinary faces of working people acting out their daily lives. Objects that would seem mundane to others — the mass-marketed and everyday items that play a ubiquitous role in life but often remain unnoticed — were instead the focal points of his art.

SFMOMA’s Pritzker Center for Photography, the largest exhibition space dedicated to photography in the United States, will devote all its galleries to presenting Evans’s 50-year body of work thematically rather than chronologically. This retrospective highlights the artist’s fascination with American popular culture, or vernacular, which he transformed to the level of art. The first half of the exhibition is devoted to the subjects that caught Evans’s interest, including text-based images like signage, show windows, roadside stands, billboards, and other examples of typography. What follows are the iconic images of the Depression through covert street photography, a style that would gain popularity in the 20th century with photographers like Weegee and Diane Arbus. Evans was passionate about reading and writing, working as a staff writer for Time magazine and an editor at Fortune magazine, all of which influenced the sense of storytelling in his photography.

The second half of the exhibition explores Evans’s styles of applied photography through more traditional representations of architecture, catalog, and postcard photography as well as studio portraiture. Personal collections of more than 10,000 postcards, scrapbooks, paintings, hand-painted signage, and graphic ephemera including flyers, tickets, logos, and brochures give insight to the artist’s source materials that provided inspiration. 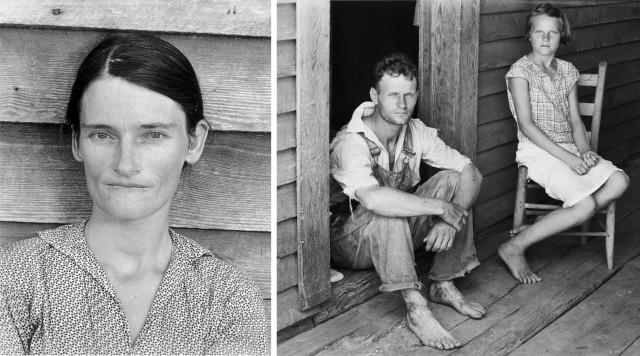 Candid without seeming intrusive, Evans’s subjects, particularly the people of the Depression, seem more like collaborators than subjects in a portrait. This sense of connectivity allows the viewer to look into the eyes of Allie Mae Burroughs and see her strength without pity. Evans’s photographic subjects communicate a quiet, calm sense of place that helps us see the everyday as the sublime.