In San Francisco, where extensive construction work has taken over the city’s neighborhoods and business districts, it seems almost absurd to attempt three enormous, overlapping projects on and around three major Northside thoroughfares, but that’s exactly what the San Francisco Municipal Transportation Agency has planned. Here’s the latest news on the Polk Streetscape project, the Van Ness Transit Corridor Improvement and Bus Rapid Transit project, and the Lombard Street Invest in Neighborhoods Initiative. 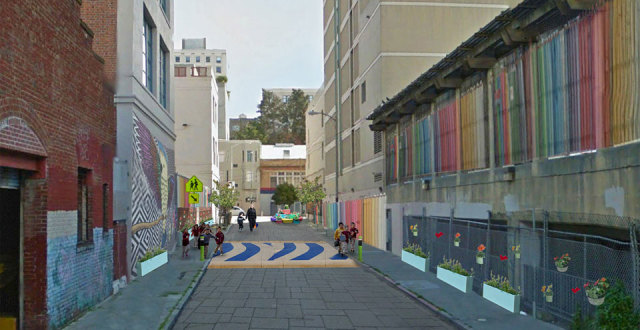 After nearly 50 community meetings since 2012 that featured contentious debates between residents, merchants, and bicyclists over replacing parking spaces with bike lanes, SFMTA staff submitted proposed changes to its original design for Polk Street between McAllister and Union streets at a public hearing on Jan. 30, 2015. The latest plans include high visibility crosswalks and red zones near intersections to increase awareness of pedestrians, turning lanes and separated signal phases to reduce conflicts between turning vehicles and people crossing the street, corner “bulb-outs” (a curb extension used to slow down turning vehicles), and enhanced signal timing. Improvements to help increase the reliability and efficiency of Muni’s 19 Polk buses, from relocating bus stops to making bigger boarding areas, as well as new paving, better lighting and new landscaping, are also proposed.

The most controversial part of the redesign is the same as it has been since the project’s inception: parking. The revamped plans would convert 100 parking spaces between Pine and McAllister into a northbound raised bikeway. This removes approximately 65 percent of parking in that part of Polk. Between Pine and Union, the SFMTA wants to remove 10 parking spaces to implement pedestrian safety measures, which amounts to 4 percent of the parking on that stretch. In total, the SFMTA wants to remove 140 parking spaces —110 on Polk Street and 30 on side streets.

The protected bike lane championed by cycling advocates that had been slated for the north-south route of Polk has been replaced with a shared-road green bike lane for the entire southbound stretch and the aforementioned raised bikeway northbound between McAllister and Pine. The remaining span would feature “sharrows” (markings in the center of a travel lane to indicate that a cyclist may use the full lane).

The SFMTA could vote on the final plan any day now. It’s interesting to note that District 3 Supervisor (and mayoral appointee) Julie Christensen, who represents the Polk area, has yet to take a position on the project, acknowledging that there is “still a lot of unhappiness.” 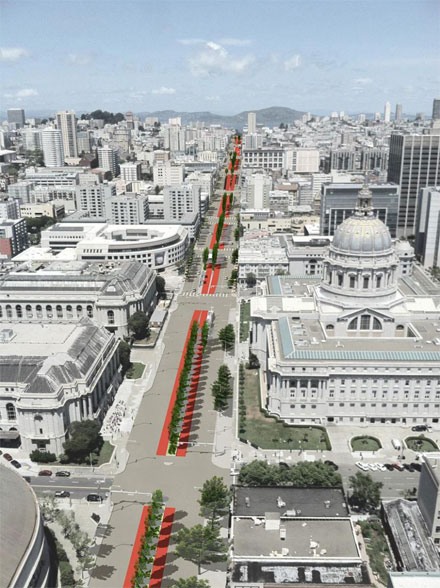 The Van Ness Transit Corridor Improvement Project includes plans for the Van Ness Bus Rapid Transit (BRT) and is supposed to create an “efficient and safer experience to thousands of people moving along Van Ness Avenue from Lombard to Mission Streets.” Transit on the corridor is currently provided by Muni routes 47 and 49, and Golden Gate Transit. The Van Ness Transit Corridor improvements are expected to reduce transit travel times by 32 percent (though critics have their doubts).

This will be the first application of BRT principles in San Francisco, a bus service with rail-like features seen around the world. The project is part of the larger “Muni Forward” initiative, the goal of which is to create a citywide network of rapid transit routes. Other objectives are to promote pedestrian and bicycle safety, to “enhance the urban design,” and to “strengthen the identity” of Van Ness Avenue.

The SFMTA projects 60,000 users of the corridor daily. There will be signal upgrades, new street and sidewalk lighting, landscaping, and roadway resurfacing. The BRT will feature center-running, dedicated transit-only lanes (picture two sleek buses zipping down the middle of Van Ness) as well as new traffic signals that prioritize transit at intersections and enhanced boarding platforms (the meridian would remain and passengers would board buses on islands in the middle of the avenue). Like most of the city’s street “improvement” projects, it comes at a cost to anyone with a motor vehicle, as it will prevent drivers from turning left off Van Ness between Lombard and Mission streets with the exception of Broadway.

Through the beginning of March 2015, a contractor is conducting utility location excavation at 30 places along the Van Ness corridor between Mission and Lombard streets to confirm any existing utilities that might conflict with BRT construction work.

Long shot of what Van Ness Avenue will look like after project completion.

The Invest in Neighborhoods Initiative is one of the 17 points of Mayor Edwin Lee’s Jobs and Economic Opportunity Plan. The goal is to offer “focused, customized assistance” to meet the specific needs of the city’s neighborhood commercial corridors. The plan seeks to strengthen and revitalize those districts by coordinating with multiple city departments and by partnering with nonprofit groups. Assistance will include loan programs, façade improvement grants, and technical assistance for small businesses.

Plans for Lombard Street are in the early stages, but possibilities include shifting bus stop locations from the near side to the far side of the street, adding bus bulbs, repaving, and upgrading curb ramps to meet current Americans with Disabilities Act standards. A large emphasis will be placed on making Lombard safer for pedestrians through the implementation of “WalkFirst” intersections, which could utilize any of 22 phased countermeasures, including protected left turns, turn prohibitions, reduced lane widths, traffic circles, pedestrian refuge islands, corner bulbs, and speed humps. City agencies, including SFMTA, DPW, and the PUC, are collaborating to complete utility upgrades, safety interventions, and streetscaping prior to the Caltrans repaving project, which is slated to begin late summer or fall of 2018. The construction will affect Lombard between Van Ness Avenue and Lyon Street.

In the coming months, we will be exploring the potential benefits as well as the potential negative impacts of each of these projects on merchants and residents of the Northside neighborhoods. How do you feel about the Polk Streetscape project, the Van Ness Transit Corridor Improvement and Bus Rapid Transit project, and the Lombard Street Invest in Neighborhoods Initiative? E-mail us your thoughts at [email protected].