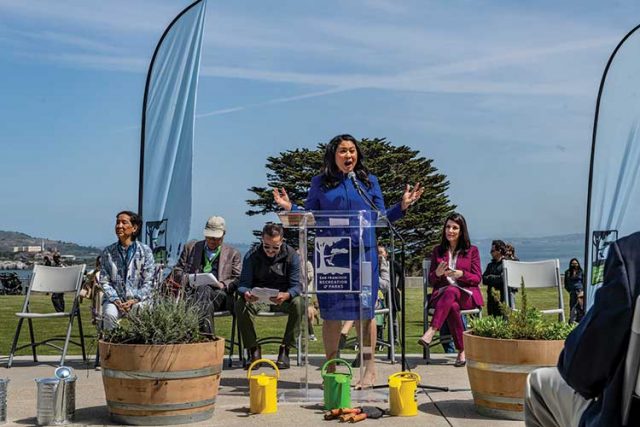 “Francisco Park is a testament to the power of public service,” said District 2 Supervisor Catherine Stephani. “I have been working with the community and city departments to bring the Francisco Park project to life since 2008 when I was a legislative aide to Supervisor Michela Alioto-Pier, and I’m thrilled to see it completed. Francisco Park is a crucial public resource that will ensure San Francisco’s northern waterfront is open and accessible to everyone for generations to come.”

The Francisco Reservoir was first constructed in 1859 to serve the booming gold rush population. It ceased being used in the 1940s after the Lombard Reservoir opened a block away.

The new park was made possible by a successful effort by the Francisco Park Conservancy to raise $27.5 million for construction and maintenance; in addition, the San Francisco Recreation and Parks Department purchased the land for $9.9 million in 2014 from the Public Utilities Commission.

“The Francisco Park Conservancy is pleased to grant the gift of the park improvements to the San Francisco Rec and Park Department,” said Conservancy Board President Leslie Alspach “It has been a successful public/private partnership to build this park; a partnership that will continue to keep the park a great community asset to enhance the lives of all San Franciscans and visitors for decades to come.”