Greens restaurant, the internationally praised, Michelin starred, and Zagat recommended vegetarian restaurant in Fort Mason, is celebrating its 40th anniversary with an acclaimed chef dinner series. Six renowned chefs have set out to explore vegetarian cuisine focused on the six values of generosity, patience, virtue, energy, focus, and connection by preparing a four-course, prix-fixe meal each month. Launched in July with Reem Assil of Reem’s California, followed by Alice Waters of Chez Panisse in August, and Suzette Gresham in September, celebrating her own milestone of 30 years as executive chef and co-owner of the Michelin-starred Acquerello. The series continues through December.

Conceived as a place where Zen students could work together and practice Buddhist values of attentiveness, taking care, and service to the community and visitors, Greens provided the opportunity to extend these Buddhist values in the workplace. In turn the restaurant provided a means of financial support for the San Francisco Zen Center. Supplied by produce from the Zen Center’s Green Gulch Farm in Marin, and providing only vegetarian cuisine, the restaurant was a forbearer of farm-driven cooking. The timing in 1979 was right to be on the cutting edge of a new food movement: Alice Waters had just opened Chez Panisse in 1971, ushering in a new interest in fresh produce. Greens would contribute to change the way we thought of vegetarian cooking, elevating it beyond tofu and steamed vegetables to tasteful, creative cuisine.

THE CHEFS AND FOOD

All the generations of Greens chefs have remained true to the originalBuddhist values, starting with Deborah Madison, Zen student and cook at Tassajara Zen Mountain Center, the Zen Center’s outpost in Carmel Valley. She handed over the reins to Annie Sommerville, also from Tassajara, in 1985 after four years of training. Sommerville credits Madison for “taking produce and turning it into something very beautiful on the plate” and “prov[ing] that it could be delicious,” thereby establishing the culinary tone of restaurant.

This is carried forward today by Greens chef du jour Denise St. Onge, on board since 2018, and who would like to incorporate vegan options in future menus while still maintaining the restaurant’s Zen heritage. Green Gulch Farm still supplies the restaurant, supplemented by other local farms.

Housed in a former machine warehouse, and one of the first tenants at the prior army base Fort Mason, the restaurant seems rather unlikely located with an unassuming small sign hanging from the roof at the end of a long building housing other businesses.

The interior was designed and constructed by Zen Center carpenters, including an ordained priest. It incorporates 12 types of wood, much of it reclaimed: the massive entry doors are made from black walnut; entry area stairs from hickory; the curved bar from Port Orford cedar; and the dining tables from maple, walnut, and cherry. A three-ton redwood woodcarving installation by JB Blunk shares the focal point with the floor-to-ceiling windows framing a view of the Golden Gate Bridge and Marin headlands. Original landscapes painted by Bay Area artist and (San Francisco Art Institute graduate) Willard Dixon soften the warehouse bones.

The number of restaurants that have come and gone in the city in the past 40 years is too numerous to count, so what is Greens secret to success? Whether the iconic view of the Golden Gate with sailboats and lounging sea lions and diving seagulls, attentive waitstaff, and the calm, Zen-like approach, the restaurant functions like a well-oiled machine, as if taking inspiration from the space’s former function as a machine warehouse. The many waitstaff move about efficiently and quietly, are polite, friendly, and accommodating, delivering food that is meticulously prepared and presented.

Perhaps not unlike many, I’ve been to Greens a handful of times, celebrating an anniversary, meeting friends for brunch, sharing with out-of-town family, and popping in for a Grab-and-Go impromptu lunch to enjoy on a bench overlooking the bay. The combined experience is hard to beat. 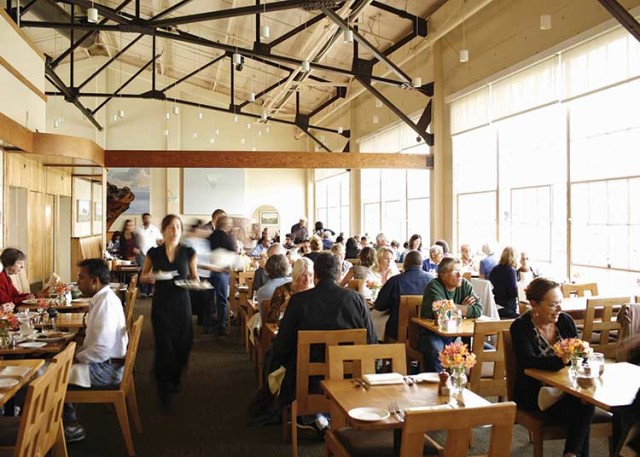 A visit last month afforded the opportunity to taste a menu prepared by Suzette Gresham, recognized as one of the most influential chefs in Italian fine dining, known for her elegant and understated approach, evident in her September menu. It began with an amuse bouche of a creamy cucumber gazpacho with an almond milk base served in a tea-like ceramic vessel, followed by the first course of tomato (from Gresham’s own garden) and burrata with basil and Oregon sea salt. The dish was artfully presented on a rectangular turquoise plate, which highlighted the bright small heirloom tomatoes of all shapes, the round red ones invisibly stuffed with burrata, and topped with a basil jelly resembling tomato seeds.

Saffron-braised fennel topped with fig followed, piled atop a crumbly, savory hazelnut cookie and topped ever so delicately with bee pollen-laced fennel fronds. A Swiss chard-stuffed raviolo with parmiggiano and brown butter, scattered with tiny chanterelle mushrooms along the rim of the dish was a delicious and satisfying third course.

Dessert, fittingly from an Italian chef, was vanilla gelato served atop crumbled Amaretti and garnished with roasted strawberries. Immediately after it was served, another server appeared to present a 40-year balsamic in a lovely bottle from which she topped the dessert.

My dining companion, who consistently and earnestly says he welcomes a meat-free meal, had joked as we entered about whether he could get chicken on the side, and I suspect he would have taken up the offer if available. But no matter, he’s still talking about the meal being one of the best ever, and I have to agree.