Homeless people: Yes, they are our problem 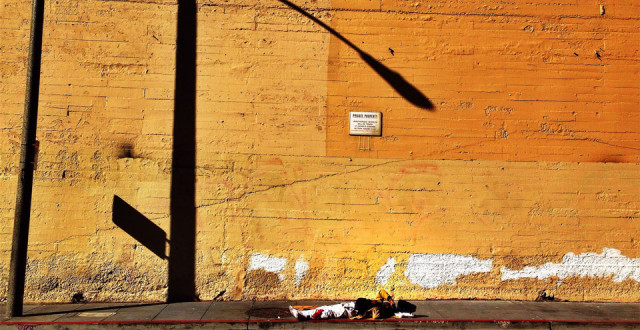 The last time I saw Alphonsus McCourt was at the memorial for his celebrity bartender brother, Michael. Alphie, as everyone calls him, came out from New York and read one of his poems. Another brother, Frank McCourt, was the author of the well read Angela’s Ashes. Malachy McCourt is an Irish raconteur and wrote an autobiography called A Monk Swimming.

Although Alphie and I exchange casual messages by e-mail, the one I received the other day surprised me.

Dear Ernest: I hope you are well and still working to save the world from zealotry. Yesterday I read in The New York Times about the upcoming media blitz on homelessness. (I once sent a letter to the Times asking that they use the term “homeless people” and not just “homeless,” which is a class just like “disabled” and so on. To leave out the word “people” is to create another class and to dehumanize. That’s my editorial for today.) I have written a poem about this issue that might be useful. It appeared in my book The Soulswimmer.

Most of us seem to agree that there are several categories of homeless people — the mentally ill, addicts (perhaps also mentally ill), those citizens down on their luck and downtrodden, and perhaps a fourth, disaffected street people, maybe homeless, maybe not.

With Alphie’s poem as a takeoff, I decided to do two things — I would try to engage some homeless “people,” and I would speak to some prominent North Beach citizens about their thoughts on the issue.

I had trouble engaging homeless people in North Beach. There was a woman lying on pieces of cardboard in the entryway of a defunct bakery. Her wheelchair was next to her along with what I presumed to be all of her belongings. Perhaps mentally ill, she would not engage, just looked off into space. As I rose deciding to call Central Police Station, a black-and-white cruiser stopped. There was nothing I needed to say or do. The cops were on top of the situation.

On another occasion, I stopped at a corner to engage a man I frequently see sitting there. I asked him if he had a place to live and if not was he in touch with any organization that might assist him. “F—k off or give me five dollars,” he said.

Later, I saw a man sitting on the sidewalk near the Wells Fargo Bank. I squatted down by him.

“Do you mind if I ask you a few questions?” I said.

“Do you have a place to stay and to sleep?”

“Do you know about an organization called North Beach Citizens?”

“Yeah, I’ve heard about them.”

“Why don’t you visit them, and they will help you.”

“You think I should.”

“Yes.” I handed him a five-dollar bill, and he thanked me.

“Get yourself something to eat, and then go to see North Beach Citizens.”

“Why are you on the street?”

“What job did you have?”

“I worked for the United States Postal Service but they laid me off.”

I wanted to ask why, but while I debated that he said, “After that I spent all my pension.”

“Are you going to go to North Beach Citizens?”

I promised myself to keep trying to engage homeless people in North Beach, but maybe I’m losing my edge for the job.

I talked to Francis Ford Coppola about the situation in North Beach. Coppola’s organization, North Beach Citizens, is designed to help homeless people by treating each person as an individual rather than as a generic public annoyance, and then do something about each one individually.

Coppola told me: “For me the most effective way for the city to deal with all this is to do it on a neighborhood-by-neighborhood basis with the neighborhood itself a partner.”

When I discussed the issue with Lawrence Ferlinghetti, he said, “I think Francis Coppola’s North Beach Citizens project is the best that can be devised (not that it can’t be constantly improved). And the rest of the city should follow Coppola’s idea of making every homeless person a citizen (with privileges, as long as the citizen remains in good standing). Beyond that, a larger vision would include Bernie Sanders’s plans to narrow the gap between the Haves and the Have-nots.”

For the point of view of a North Beach merchant, I asked John A. Duggan, proprietor of Original Joe’s. Echoing the views of both Coppola and Ferlinghetti about neighborhoods and their responsibility, Duggan said, “After conducting business in the heart of the Tenderloin for 70 years, where it was often a contact sport just to make it into the restaurant … we don’t see much of a homeless problem in North Beach.”

I have a thoughtful friend in author Herbert Gold. Herb lives on Russian Hill but has long had an emotional stake in North Beach. Here is how he viewed San Francisco’s homeless citizens:

“For reasons including weather, a traditional reputation for a welcoming spirit, and its westernmost last-stop location, San Francisco receives a ceaseless tidal flow of alkies, drug addicts, psychotics, and the desperately down-on-their-luck. Reagan-era cuts to funding for mental hospitals need to undergo a makeover. Employment programs for those who want to work and can, need to be expanded. Since this is a national issue, not only a San Francisco problem, state and federal funding is an obligation.”