Perhaps a compromise on the Piazza St. Francis-Poet’s Plaza plan?

It was my intention in this sketches column to give readers some positive news on the Piazza St. Francis-Poet’s Plaza, Lawrence Ferlinghetti’s visionary plan to turn a short section of Vallejo Street in North Beach into a pedestrian haven where passersby could enjoy life without gas guzzling, internal combustion engines fouling the air.

Unfortunately, the project is stalled. It’s dead in the water. So I’m giving you a summary to date and then suggesting a possible course of action.

Ferlinghetti conceived the Piazza St. Francis-Poet’s Plaza idea in 1998. In 2002, he formed a committee of interested North Beach neighbors to explore the idea. I’ve been writing about this in various publications since 2004, and the project is no closer to completion now than it was then. Why is that?

We have a dilemma here. There are residents of North Beach (people of good faith) I believe would truly like to see Ferlinghetti’s idea — his original concept — become a reality.

There are others (also of good faith) who would like to see Ferlinghetti’s idea become a reality — but not in the form in which it has been presented.

Some on both sides of the issue are willing to compromise to see the project through. Others are not.

TWO SIDES OF THE ISSUE

Of course, the operative word here is “compromise.”

The sticking point is this: One side sees the Piazza St. Francis-Poet’s Plaza as completely automobile free. This is the way Ferlinghetti conceived it. And it’s a grand idea. Goodbye internal combustion engines on this short stretch of Vallejo Street between Upper Grant and Columbus avenues. And good riddance.

The other side views the concept impractical, untenable, perhaps even dangerous. The issue with these people is traffic flow: Telegraph Hill neighbors being unable to move about freely in their autos, delivery trucks hampered by nowhere to stop (so they double park further clogging traffic), and emergency services (fire engines, ambulances, police vehicles).

These people want an access corridor for such traffic and they suggest the pedestrian area share this short Vallejo Street corridor. 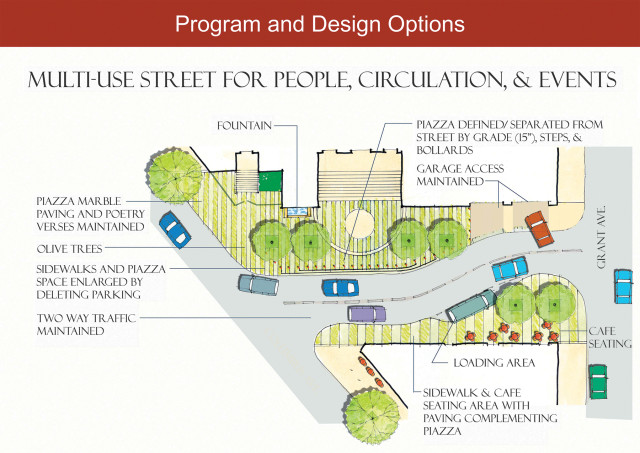 THE COURAGE OF CONVICTIONS

There are (as I stated) people of good faith on both sides of the issue who consider Ferlinghetti a noble visionary. Even those who may be against any proposal for the Vallejo Street site are not necessarily against Ferlinghetti.

Ferlinghetti is a man of towering integrity who has the courage of his convictions. He believes we — all of us — should strive to achieve as perfect a world as possible. Idealistic? Yes! What’s wrong with idealism? Ferlinghetti is 98. He is not going to change at this point. Nor should he. He’s always been courageous; his own man. And I love him for this.

What makes Ferlinghetti an important figure in our society is not
just his poetry. It is also his unshakeable belief in the importance of the poetic voice, and his confidence that poetry is capable of transforming the world. His Poet’s Plaza will provide a forum for that poetry.

In his poem, A Coney Island of the Mind, there is a passage that tackles just what it means to be a poet:

Whenever he performs above the heads of his audience

To a high wire of his own making.

As I said, we have a dilemma here and compromise is the operative word. I would like to see us get beyond this.

So how can we address this? The only way is to address it with an open mind. Acknowledge we have a problem. Sit down in a neutral corner … so to speak … perhaps over a long North Beach lunch, and forget the “my way or the highway” mentality.

Let’s see if we can come to some kind of agreement. And if we can, let’s get this project moving. If we can’t, so be it. Maybe that’s just the way the world is today.

In any case, I’m tired of writing about the Piazza St. Francis-Poet’s Plaza. And I’m not writing about it anymore unless there is a major breakthrough.