by Sara Brownell and Lynette Majer

For many years, our editor Lynette and I were part of Ernie’s Gal Pals lunch club, which consisted of either lunch at Capp’s Corner (his preference) or Sotto Mare (mine). All lunches included two-to-three glasses of wine, seafood or pasta, and a trip to Mario’s Cigar Bar for espresso to stay awake (or to keep drinking). Ernie would usually leave the two of us after Mario’s for a jaunt to his beloved Little City Market where he would purchase meat for dinner and perhaps chat up the butcher about his latest book idea. Being around Ernie was like being around North Beach royalty, the cool kid’s club — where all the bartenders, waiters, and regular clientele knew his name and often complimented his choice in female companions. With this, his face would beam and we would blush (it wasn’t just the wine). These lunches seemed to transcend time and space, and we thought they would never end; “We’ll always have our lunches with Ernie,” we chimed.

With the heartbreaking news that our beloved pal was gone, the party vanished in a cloud of cigar smoke over Washington Square, the three Musketeers now a not-so-distant memory in the cool and sunny afternoons of North Beach. The reality of his departure may never settle in, may we choose to linger in the memory of his glow, the excitement in his voice, the twinkle in his eye, and bask in his fascinating tales of yore as we raise a toast to our forever friend, as he sometimes signed his e-mails to me, Tequila Ernesto.

Sara’s warm sentiment expresses how all of us at the Marina Times feel about Ernie. His energy, his optimism, and his dogged determination left an indelible imprint.

Ernie joined the Marina Times family in 2009 as a contributor to Northside San Francisco, writing mainly about food. When Northside was eventually combined into the Marina Times, his oeuvre expanded to include personality profiles, travelogues, and neighborhood musings about his beloved North Beach. A true professional, he never missed a deadline and willingly accepted additional writing assignments. Ernie was a significant cog in the Marina Times wheel. He will be sorely missed. 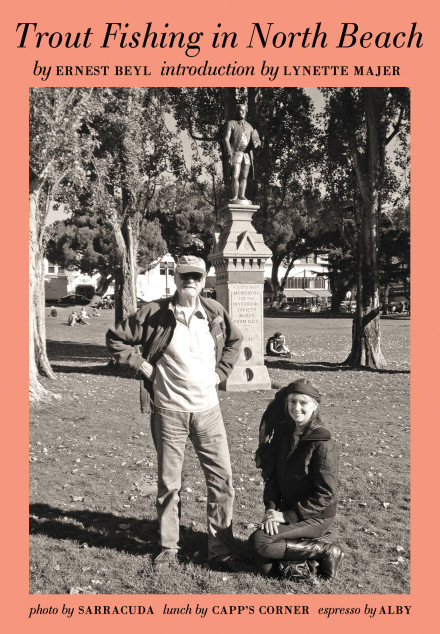 Ernie Beyl and Lynette Majer posing as Richard Brautigan and
Michaela Le Grand, whom he referred to as his muse, in a mock-up of Brautigan’s Trout Fishing in America. Photo: Sara Brownell