In the wake of a killing 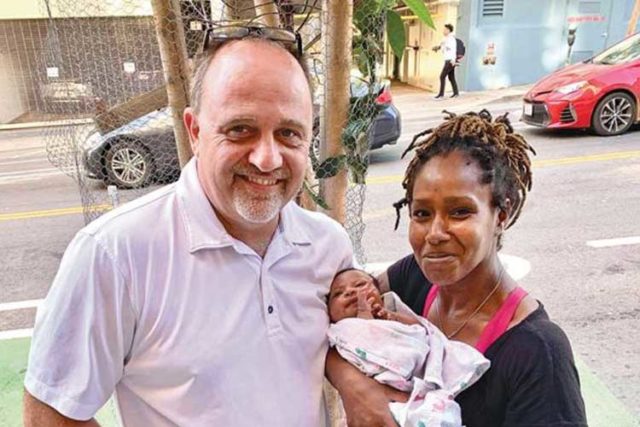 Sentayo was just 6 years old when her mother died of starvation, but she had no time to grieve. She took her infant sister, Hoptami, and ventured into Addis Ababa, the capital and largest city in Ethiopia. In order to survive the massive famine, Sentayo learned to braid hair, a skill that enabled the sisters to live on the streets alone for a year.

That’s when Sherree DeYoe and her former husband adopted the pair and brought them to Manteca in California’s San Joaquin Valley.

Even at 7 years old, Sentayo had horrible memories and didn’t want to be called by her Ethiopian name. “She would point to her baby sister’s scars and make gun sounds, meaning she was shot at. She would do the motion of slitting her throat and say that’s what happened if you weren’t very quiet at night. Her mother had been raped. Her father was killed, and so was her sister’s father,” Sherree explains. To honor her new daughter’s wishes, Sherree renamed her Emma, and her sister, then 18 months old, was given the name Mary.

“Emma had overcome so much already,” said Sherree. “She didn’t know the language and had to go straight into third grade. She was so smart. When I was in nursing school, she would sit on the kitchen counter while I cooked dinner and quiz me on vocabulary. It helped both of us.”

Eventually Sherree remarried, and new husband, David DeYoe, became a devoted, loving stepfather. The couple had other adopted children and also served as foster parents. The family was close and happy. But as the sisters grew older, Emma struggled with those horrible memories, and she turned to drugs to escape. While Mary graduated college and began work on her master’s degree, Emma took her demons to San Francisco’s Tenderloin district.

Then, in 2020 at age 32, Emma got pregnant. After battling years of addiction, she got clean. And as always, she was resourceful.

“She was selling cigarettes on the street. When they banned menthols in San Francisco, she would buy cartons wherever she went and sell to her sources who would sell them under the table,” David recalls. “The other thing she was pushing was Viagra. She’d say, ‘Oh Pops, there’s so many ways to make money on the streets.’ She would wait outside the gay bars and clubs and sell Viagra for $10 a pill.”

After giving birth, Emma lived in a halfway house with her boyfriend, Eric, and their new baby, Angelika. “She had turned a corner, she was getting clean, but it wasn’t easy,” David says. “She would say, ‘Pops, this is so hard. Why would they put us in the Tenderloin with all the drugs and drug dealers?’ She was determined to get her family out of there, and on Jan. 6 they were supposed to move into a halfway house in Emeryville.”

BRINGING A MILK CRATE TO A GUNFIGHT

That weekend, the DeYoes had taken Angelika for a visit in Manteca, so Emma met some friends to play a dice game on the corner of Larkin and O’Farrell Streets. Around 4 a.m. on Sunday, Jan. 5, two teenagers started harassing her. “These gang members, MS13, came to get money from Emma for standing on their corner. Emma was headstrong and she refused to pay them, so they left and returned with a gun,” David recounts. “Emma swung a milk crate and he shot her. When she turned to run he shot her in the neck and again in the back. He was in a full stance like he was at a firing range. After the final shot he dropped the gun; the other kid picked it up and they both ran in different directions.”

David heard all of this from Emma’s friends in the Tenderloin, but then he learned that a nearby surveillance camera caught the entire incident. He watched it with police. “The tape is horrific … to see your child get shot,” David says, his voice trembling.

One week later, officers from the San Francisco Police Department’s narcotics squad arrested 18-year-old Kevin Lopez-Figueroa and a 17-year-old juvenile, booking them both on suspicion of murder and conspiracy, but San Francisco District Attorney Chesa Boudin declined to file murder charges against the two and they were released. Figueroa was arrested again by Tenderloin officers after flashing gang signs at undercover detectives. He was booked on a gun warrant, but a spokesperson for the district attorney’s office said, “The people have the burden of proving beyond a reasonable doubt that a defendant did not act in lawful self-defense.” The gun charge was dropped to a misdemeanor and Figueroa was once again released. David was shocked and angry, and decided to visit Boudin.

‘HOW DO YOU SLEEP AT NIGHT?’

David sat in a room with Boudin, his then-chief of staff Cristine Soto Deberry, a victims’ advocate, and Diane Knoles, a 34-year veteran of the district attorney’s office.

“There wasn’t a dry eye in the house,” David says, “except Chesa and Cristine. They weren’t crying.” In the video, David pointed to how Emma raised the milk crate up for protection, at which point Figueroa shot her “face to face.” Boudin shook his head and said, “It’s self-defense. And Emma also had a knife.” David was stunned. “What knife?” he asked. “Kevin had a gun. Emma had a milk crate.” Boudin remained steadfast, telling David the knife in Emma’s hand was visible in the video.

As difficult as it was, David came back to watch the video a second time. “I said, ‘Look at Emma! She’s running away! How is that self-defense? And what about intent? He left and came back with a gun. Are you saying that’s not at least second-degree murder?’ and Chesa just stared at me and said, ‘No. A judge would never go for that. Plus, we never recovered the gun so we can’t charge him.’ I said, ‘You never found the knife Emma supposedly had either!’ Chesa said, ‘We see it on the video,’ and I said, ‘You see the gun on the video!’ Chesa just stared at me, like I was wasting his time and said, ‘It doesn’t work like that.’ At this point I was thinking, ‘I can’t just jump across the table and choke him to death because I’ll never get out of here.’”

Determined to get justice for Emma, David returned to watch the video for a third time with Boudin. “When you read his energy it’s like ‘I’m not doing anything on this. I have to sit here and listen to the victim’s family wasting my time.’ Both he and Cristine were incredibly cold. After the third time we watched it, Chesa repeated that it was self-defense. I told Chesa and Cristine I would take it to the feds. Chesa said, ‘That’s your right.’ I looked straight at him and asked ‘How do you sleep at night?’”

As David was leaving the office, staff came from their desks to console him. “They knew what was going on,” David says. Diane Knoles followed him outside. “She said, ‘Boudin’s not going to do anything. Take it to the feds.’”

Boudin promoted Knoles to head of homicide on Jan. 13, after firing former head Mike Swart, along with five other attorneys, just five days after he was sworn in. “She was really upset about Emma,” David says. “I know she felt terrible she couldn’t do more.” Four months later, Knoles left her new role and accepted a position with the Napa County District Attorney’s Office.

The DeYoes haven’t heard from Boudin’s office since.

David didn’t want Sherree to see the video, but she did read the autopsy. “I’m a nurse, so I asked for the autopsy report. She survived the first two. The one that killed her was the shot in the back which hit her heart. The doctors were crying when they talked to us. They tried really hard to save her.”

That, she says, was in sharp contrast to Boudin. “He was trying to make Emma the aggressor and these gang members the victims. He made every excuse. It was self-defense? Emma was little — five feet tall. She had Wolff-Parkinson disease, which weakens the heart, so she couldn’t exert a lot of energy, and she just had a cesarian section. She was not up for fighting.”

According to Emma’s friends, the killers boasted about the murder. “They were using the N-word, saying how that’s their corner; now they’ve claimed it,” Sherree says. “The hardest part is they’re out there living their lives and don’t care they killed Emma because Chesa Boudin won’t do anything. She was expendable; she was a Black woman in the Tenderloin. They can’t possibly understand. Emma was somebody’s daughter. She was my daughter.”

As for Boudin, Sherree feels the same way as her husband. “He doesn’t care. He kept saying, ‘It’s not my fault. I didn’t have any say-so in this. It was the judge’s fault.’ But judges take recommendations from the DA. He’s basically telling people, ‘Come to San Francisco — you can kill someone and get a pass.’ He says he’s there for victims, for Black and Brown people in marginalized communities, but he doesn’t give a damn.”

Undercover officers made a drug buy from the juvenile suspect in the Tenderloin just a week after Emma’s murder. He remains free. As for Kevin Figueroa, Sherree says, “The police told us that his parents were really good people. They were upper middle class and had a nice home. This devastated them.” The chances of justice for Emma fade by the day: the DeYoes hear Kevin left San Francisco and is trying to get into the Navy.

Emma’s daughter Angelika was 6 months old when her mother was killed. She’s now 2 years old and living with her grandparents. Over the last year the DeYoes tried reunification with the father, but after Emma’s death he went back to using drugs. As of Sept. 1, his rights were terminated, and the DeYoes are moving forward to permanently adopt Angelika. “She’s just like Emma — funny and smart,” says Sherree. “The doctor who delivered Angelika even came to Manteca for Emma’s funeral in the middle of the week. She said she loved Emma.”

Sherree says they plan to raise Angelika to be a proud, strong woman, just like her mom. “I would tell her, ‘Don’t give away your power. Being vanilla is boring. What do people put on vanilla ice cream? Chocolate.’” Despite all that she went through as a child, Sherree says Emma had a lot of inner strength and always knew how much she was loved. “I told her I was in awe of her. She amazed me. She was my hero.”