Through Feb. 9, the Legion of Honor will present the first reassessment of the paintings of James Tissot in over 20 years. The French painter and illustrator became known for genre paintings of society women in which he told the stories of modern life through portraiture.

“The work of James Tissot provides a fascinating lens onto society at the dawn of the modern era. Long recognized as a keen observer of contemporary life and fashion, this exhibition brings new light to his narrative strengths and his skills in portraying the emotional and spiritual undercurrents that exist below the surface appearances,” states Thomas P. Campbell, director and CEO of the Fine Arts Museums of San Francisco. Co-organized by the Musées d’Orsay et de l’Orangerie, Paris and drawing from holdings of private and public collections throughout the world, the exhibition will include approximately 60 paintings as well as drawings, prints, photographs, and cloisonné enamels to comprise an extensive study of Tissot’s techniques. 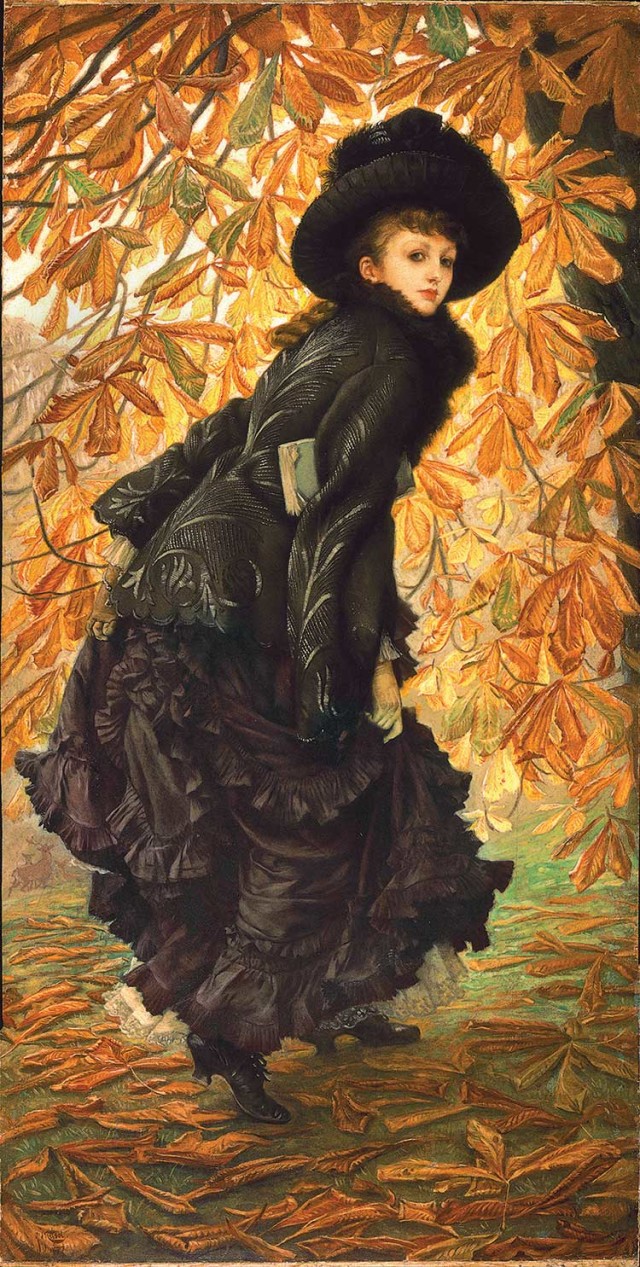 The exhibition is arranged thematically, reflecting the phases of the artist’s career. Tissot began painting historic medieval scenes in France, would later come to Anglicize his first name, Jacques, and expatriate to London. There he began a relationship with Kathleen Newton, who became a model and muse. Her early death from consumption was triggered Tissot’s return to Paris after a 10-year absence.

Declining his friend and mentee Edgar Degas’s invitation to exhibit with the Impressionists, he turned instead to social events, balls, and painting metropolitan life with attention to detail, humor, and pathos. The narratives of contemporary life are reflected in society pictures including The Ball on Shipboard (1874), London Visitors (ca. 1874), Holyday (also known as The Picnic, 1876), The Prodigal Son in Modern Life Suite (1882), and examples from his series La Femme a Paris (1883–85). Paintings like La Femme à Paris: The Shop Girl, (1883–85) show Tissot’s incredible command of light — the shop girl, eyes facing the viewer, is backlit in muted tones inside a store, and through the windows a brightly lighted, busy street.

Holyday is another example of Tissot’s mastery for composition and subtle uses of color — figures under lush, articulated trees in diffused light, the perfectly balanced still life of the picnic blanket in the foreground backed by a still, green pond. Hide and Seek (ca. 1877) depicts the peaceful life of a young family in another dark interior backlit by the bright outdoor scene through the windows, and in the center of the painting a toddler crawls on a wrinkled rug, a halo of light surrounding her golden curls. 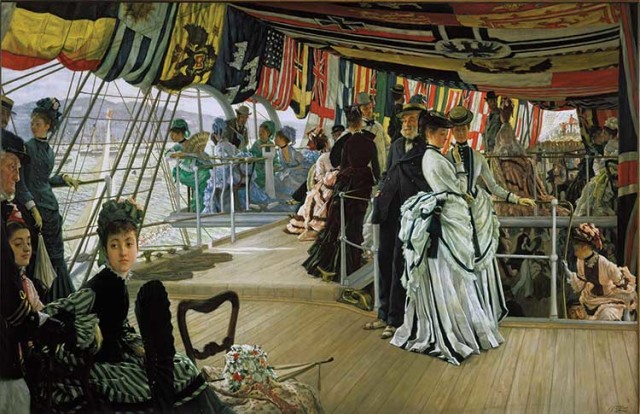 Influenced by the trends of his time, Tissot was drawn to Japanese art and mysticism.  He attended spiritualist séances, and his work The Apparition (1885) depicts the ghost of Kathleen Newton with a spirit guide. Executed as both a mezzotint and painting, Newton is illuminated by a mysterious light source reminiscent of the dramatic light seen in Renaissance paintings. This work was believed to be lost but was recently uncovered during the research process of assembling this collection for the exhibition and will be on display.

Tissot was also an early adopter of photography as source material for painting. He used the medium to catalog his works and record the lives of his family and friends in carefully arranged albums. Extensive photos from his estate will be on view, including those of his home, studio, paints, and brushes.

Tissot’s later years were devoted to his Catholic faith and representations from the Old Testament in watercolor, including a critically acclaimed series of 365 representations of the life of Christ in gouache. During this time, he made three trips to the Holy Land leading to hundreds of illustrations based on the Bible that came to be known as the Tissot Bible. He approached the themes of the Bible with original compositions. In an unusual twist, What Our Lord Saw from the Cross (1886–94), an opaque watercolor over graphite on gray-green wove paper, shows the crucifixion from the perspective of Jesus on the cross. In Portrait of the Pilgrim (1886–96), the Pilgrim looks directly at the viewer and is surrounded by sacred objects in the foreground of the painting in a cream-colored trompe l’oeil composition.

Though he was a significant talent and was famous in his lifetime, Tissot remains one of the lesser-known French painters of his era. In this new presentation, which includes a 300-page catalogue, this reexamination will transform the public’s view of the life and career of James Tissot.