Julius’ Castle will return to its perch on Telegraph Hill

I never thought I’d see the day that I could write that the long-closed (since 2007) Julius’ Castle (302 Greenwich Street) will reopen on Telegraph Hill. (My grandpa Ernie is smiling from the other side; he loved that place.) After all kinds of NIMBY complaints and opposition, the Planning Commission still voted positively to let the old-school establishment (a historic landmark) reopen. In fact, it was a clean sweep of 7–0. All right!

The restaurant first opened in 1922 (although I have also seen 1923 and 1924 listed). Julius Roz, the Italian owner, even outfitted the Gothic revival building with “interior wood paneling from the 1915 Panama-Pacific International Exposition” (via SFGate). And then there’s that view. And that deep history — numerous stars dined there over the years, from Cary Grant to Ginger Rogers. Current owner Paul Scott, who purchased the restaurant in 2012 and lives on Telegraph Hill, is looking for an operator and will be busy restoring the restaurant. I will keep you posted on how his plans progress. 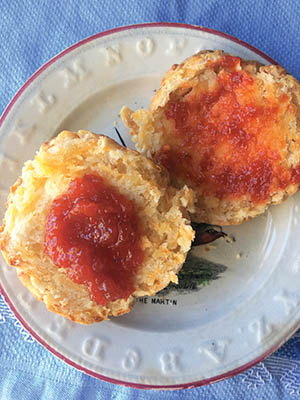 A cheddar biscuit from the new Sylvia’s Bakeshop in North Beach makes an excellent vehicle for red pepper jam (or many other things). photo: ©tablehopper.com

The original bakery ovens require a major rebuild (they date back to 1917). Mrabe says they are basically crumbling brick, so their repair will be down the road. In the meantime, you can swing by the retail bakery — named after Mrabe’s mother — for an affordable sweet treat or two and a cup of coffee (the roaster is still being determined; they’re still taste testing). Daily 7 a.m.–6 p.m., and they may be opening around 6 a.m. soon.

If you want to say Pilates class be damned, or you had a little too much Chardonnay, you can head on over to Mac’d (3347 Fillmore Street, 415-795-1026) for build-your-own mac and cheese, with bases like cheddar or French onion soup mix, your choice of pasta, and mix-ins and toppings like bacon, chorizo, kimchi, tri-tip, cauliflower, and Flamin’ Hot Cheetos. Sunday–Thursday 11 a.m.–9 p.m. and Friday–Saturday 11 a.m.–2 a.m. (yeah, that will come in handy).

Also in the Marina is a location of the (perennially unfortunately named) Asian Box (2031 Chestnut Street, 415-228-3688), offering salad, rice, and noodle boxes made with organic ingredients, plus there’s a full bar (they moved into the former Tacolicious). Daily 11 a.m.–10 p.m.

If you’re planning to travel to stand in line for a spot at State Bird Provisions (1529 Fillmore Street, 415-795-1272) in late August, you will need to adjust your dates: The five-year-old restaurant is temporarily closing starting Monday, Aug. 21 to make some updates to the space. I spoke with chef-owner Stuart Brioza, and he said it should be a couple of weeks, with plans to reopen the week after Labor Day. They’re going to be doing some freshening up and refurbishing, like new paint and tabletops and putting a polish on things. They will be making an announcement to newsletter subscribers when September reservations (and beyond) will be released. In the meantime, there’s always that fabulous bar menu at The Progress (1525 Fillmore Street, 415-673-1294) you can enjoy.

Belcampo has closed for a revamp and plans to reopen Tuesday. Aug. 1. The restaurant will soon feature a streamlined and casual menu (and service) based around their burger, daily butcher specials, and charcuterie. The expanded butcher shop will offer more grab-and-go items (including more salads).

Tweet
Send to a Friend Print
Marcia Gagliardi writes a popular insider weekly e-column, tablehopper, about the S.F. dining and imbibing scene; get all the latest news at tablehopper.com. Follow @tablehopper on Twitter and Instagram for more culinary finds!