“The paintings may communicate even better because people are lazy and they can look at a painting with less effort than they can read a poem.”
— Lawrence Ferlinghetti

The Marin Museum of Con-temporary Art opened its 2015 Legends of the Bay Area exhibition featuring the acclaimed local artist Lawrence Ferlinghetti on Feb. 28. Ferlinghetti, poet, painter, activist, and publisher, will turn 96 this month. As the co-founder of City Lights Booksellers & Publishers, Ferlinghetti, by his proximity to so many artistic movements, has witnessed political struggles, the battles over censorship and creative freedom, and the power of the image to transform. All of these experiences feed into the content of his paintings, drawings, prints, and mixed media works created over the last 60 years. 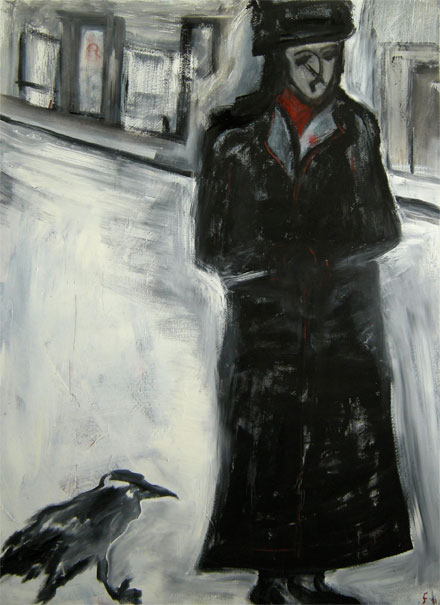 Ferlinghetti was working on his doctorate in literature at the Sorbonne in the 1940s when he discovered his interest in art accidentally one day while left alone with a friend’s art supplies. That interest continues to this day. His dreamlike imagery grows out of an abstract expressionist influence and a need to disengage from the literal; in a sense, to return to a space where the signposts of language have been removed. When asked what he would do if he had to choose between painting and poetry, Ferlinghetti would choose painting: “Painting is more like play than work.” He produced what he considered his first significant painting, Deux, in 1950. This painting, a surrealist reverse image work inspired by Jean Cocteau, will be on display at Marin MOCA.

Also on display is Mother Russia (1999), which depicts a haunted female figure with a small bird on the lower left area of the canvas. The mother’s face is a hammer and sickle. Birds are a repeated motif in Ferlinghetti’s paintings. So are the otherworldly human figures that seem to float in a space without gravity, as in the whimsical paintings of Marc Chagall.

Though he is known for his political activism, Ferlinghetti’s art has moved away from these themes in recent times. Today, his work is “… now about finding a way to escape from the present morass of disaster or whatever is descending upon us.”