One of many Marina buildings left in ruins by the Loma Prieta Earthquake in 1989 (photo: Eve Fraser-Corp / Flickr)

The Loma Prieta Earthquake that struck San Francisco on October 17, 1989 had a profound and lasting impact, not only on San Francisco as a whole, but in particular, our Marina neighborhood. I still remember driving back to the Marina that evening, and seeing homes crumbled into the streets, corner apartment buildings collapsed, and the gray smoke that turned into the massive fire at Beach and Divisadero.

Although the devastation was real, we were also very fortunate the damage was not worse. Unlike most days in San Francisco, there were no winds that evening, and most important, in conjunction with all of our first responders and emergency personnel that spurned into action, our firefighters stepped up to the challenge, and with the aid of the now famous Phoenix fireboat which anchored right off the Marina Green, saved our neighborhood.

While the earthquake was undoubtedly tragic, it also served to bring our community together, especially down in the Marina. For a number of years after the earthquake, on each anniversary, neighborhood leaders and merchants on Chestnut collaborated to host a neighborhood remembrance celebration under the Dome at the Palace of Fine Arts. It was attended by thousands, and incredibly important to the neighborhood’s healing process.

Though born out of tragedy, these celebrations brought our neighborhood together. In San Francisco, today it often feels we focus on issues that divide us instead of focusing on those that bring us together, and I believe that civic tone needs to change, especially in our neighborhoods.

It’s why I love collaborating to organize neighborhood events such as the Marina Family Festival, and why I’m excited to announce my intention to work with the neighborhood to turn the Marina Earthquake Memorial into a reality down on the Marina Green. 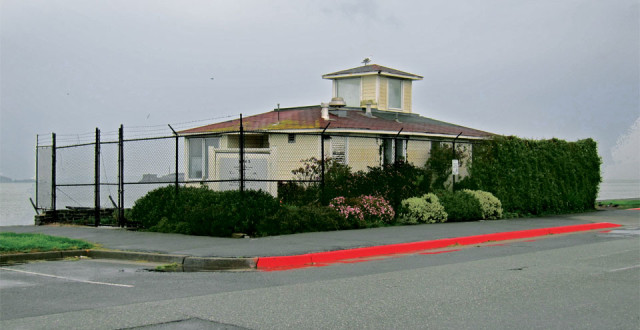 The Degaussing Station could become a new site for the Marina Earthquake Memorial (photo: Earl Adkins)

The Marina Green is an incredibly important part of our Marina neighborhood, and San Francisco as a whole. Growing up in the Marina, I remember running laps around the Marina Green in the evenings with my father (back when there was still a dirt track), and now on the weekends I take my children there for soccer games. It serves as host to a number of civic events, most recently playing a key role in the America’s Cup festivities, and is one of the most beautiful local parks in the world for our neighborhood residents.

During my first year in office, I was approached by our Recreation and Parks Department, which sought to activate the old Degaussing Station, which sits on the north side of the Marina Green parking lot. Ever since running those laps as a kid, the Degaussing Station, which was previously used by the United States Navy, has been boarded up and remained unused and underutilized for years.

In April 2011, the Recreation and Park Commission approved the release of a Request for Proposal (RFP) for the use of the building. An independent selection panel selected the Woodhouse Fish Company, which submitted a proposal to restore the abandoned space and turn it into a neighborhood restaurant. In November 2011, the Recreation and Park Commission unanimously approved their selection.

After a lengthy and substantive community conversation about the selection, it became clear that too many Marina residents were not fully supportive of the idea. While many people knew about the proposal, most I spoke with were unaware. As these concerns were brought to my attention, I put the brakes on moving the restaurant proposal forward inside City Hall.

Whenever we deal with our city’s precious open space, I believe neighborhood input and involvement is crucial to any plan that the city is looking to propose. Input and involvement is not only crucial, but in my view mandatory, because decisions about our open spaces have lasting impacts for our neighborhoods and the entire City. Unfortunately, the dialogue shifted from brainstorming ideas to better utilize the Degaussing Station space, to a debate about putting a restaurant on the Marina Green. In my opinion, it was a focus on the wrong question.

For years, many of the same neighbors that organized the remembrance celebrations after the 1989 earthquake have been working with our City’s Fire Department and various city agencies to place a memorial on the Marina Green dedicated to the 1989 Loma Prieta Earthquake. The purpose of the memorial is to remember those who lost their lives, honor those firefighters and other first responders who fought to save the Marina neighborhood, and educate the public about the importance of disaster preparedness. There could not be a more appropriate location for the memorial than Marina Green Promenade, especially given its proximity to where the Phoenix Fireboat was anchored right off the Marina Green.

In January, funds were approved from our city’s Arts Commission to turn the Marina Earthquake Memorial into a reality. During March, my office will be putting together a steering committee to help lead and see the project through from start to finish. In April, we plan to host a broad and open community meeting with the entire neighborhood for the artists to present the memorial concepts and receive feedback. Everyone is invited to attend. When the community is satisfied with the ultimate concept, and after working through any other issues, we plan to go through final design and budget approval this summer. My hope is to break ground on the Marina Earthquake Memorial this October 17th – on the 25th anniversary of the 1989 earthquake.

The neighborhood process to evaluate what would replace the dilapidated Degaussing Station has been contentious, but I believe that we have now found the best project and use for this site. The Marina Earthquake Memorial will be an urban monument to one of the most memorable events in our city’s history that brought our community closer together. The memorial is rooted in our neighborhood history, which reminds us of the past, has meaning for the future, and is something that can bring us all together.

With your help, I look forward to making it a reality.

Tweet
Send to a Friend Print
Supervisor Mark E. Farrell is the District 2 supervisor and can be reached at 415-554-7752 or mark.farrell@sfgov.org