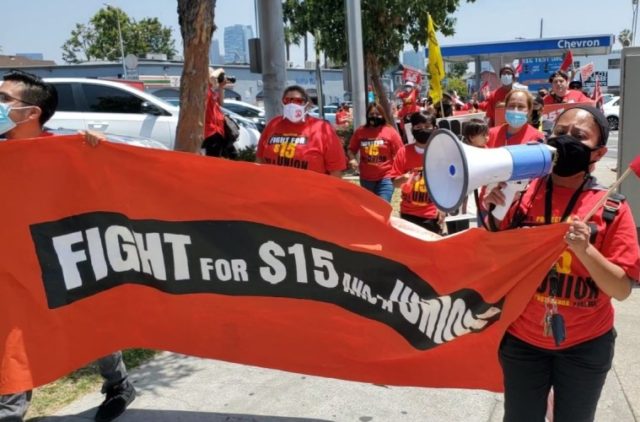 In a 15-city strike across the nation, McDonald’s employees asked for higher wages ahead of the U.S. company’s Thursday shareholders meeting.

From cooks and cashiers to U.S. Senators Bernie Sanders and Alexandria Ocasio-Cortez, those in support of the “Fight for $15” campaign are asking McDonald’s for a $15-per-hour wage, as well as a worker’s union, for all employees in the U.S.

On May 13, McDonald’s announced it would raise its minimum wages between $11 to $17-per-hour, depending on the position, and shift managers would earn $15-per-hour at its corporate locations.

“Our first value is taking care of our people, and today we are rewarding our hardworking employees in McDonald-owned restaurants for serving our communities,” Joe Erlinger, President of McDonald’s USA said. “These actions further our commitment to offering one of the leading pay and benefits packages in the industry.”

The increases will cover about 36,000 employees in the 2,270 company-owned locations, however, the raised wages will not apply to the more than 35,000 franchised locations.

“McDonalds recently announced they’d raise the minimum wage ‘quote unquote to $15.’ What they didn’t say is it’s only for their corporate locations, which only covers 5% of all the McDonald’s across the country,” Senator Ocasio-Cortez said in a ‘virtual strike line’ livestream Wednesday. “Ninety-five percent of McDonald’s are franchises. We’re not buying it. We’re not falling for it. You’re not going to do this as a PR effort. You’re not going to trick us. It’s time to step up and be honest. If you want to look like you’re raising wage to $15, you should actually raise your wage to $15 for every McDonald’s worker in this country.”

“In Denmark, the average worker in McDonald’s makes $22 an hour, receives 6 weeks of paid vacation, 1 year of paid family leave, life insurance and a pension,” Sanders said. “If McDonald’s workers in Denmark can have a decent standard of living, we can do it in the U.S.”

In a letter to McDonald’s CEO Chris Kempczinski, striking workers wrote, “We have a pretty simple solution, pay us at least $15/hr! We’ll be able to support our families without having to rely on public assistance and you’ll be able to find enough workers to keep your business running.”

The “Fight for $15” campaign also asked McDonald’s to remove its relationship with the National Restaurant Association and the International Franchise Association, claiming both have lobbied against a wage increase for employees.

Rosales added that working in fast food during the pandemic was difficult as oftentimes, employees were asked to work in place of two or three people’s shifts.

The “Fight for $15” campaign has asked for increased wages for fast food employees since 2012 when it helped 200 McDonald’s, KFC and Burger King employees stage a walkout in New York. After the protest, McDonald’s said it encouraged employees to express their concerns.

McDonald’s Thursday shareholder meeting will be held Thursday, May 20 at 7:30 a.m. PST.